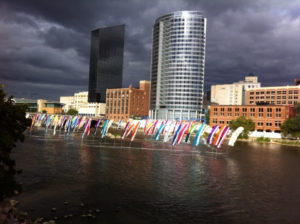 How long have you lived here? Almost seven years

Best time of year to visit? June or October

1. The city is built along the Grand River, but despite the city’s name, there are no longer any rapids.

2. The skyline, which is notable not because it’s particularly imposing, but because it exists. People both inside and outside of Michigan think of Detroit as the only city in the state. Grand Rapids isn’t a large city, but it’s a city, and almost no one realizes we’re even here. I’ve watched people come upon the skyline for the first time from the freeway, and the sudden huddle of tall buildings startles almost everyone.

2) The stereotype of the people who live here and what this stereotype misses . . .
Before I moved here, I’d been told that the area was populated largely by the descendants of Dutch immigrants who had remained homogenous and conservative. I’d been threatened that you might get the stink-eye from your Dutch Christian Reformed Church of America neighbor for mowing your lawn on a Sunday. There is arguably some truth to this stereotype, especially in suburban or rural areas around the city, but only some. (Although there is an actual wooden shoe factory in nearby Holland, Michigan, whose clients include the entire Holland High School marching band, which performs in giant wooden clogs.)
In Grand Rapids proper, where I live, I’ve encountered a lot more diversity than I expected to, and a lot of people trying to make the city a better, more welcoming place for art and artists, among others. Even among cynics, there’s a pretty stunning sense of shared purpose and optimism. I’m not sure I’ve ever lived in a place where people are so genuinely excited about a city’s future without being blind to its faults. My husband and I were surprised at how much we loved Grand Rapids when we first arrived in 2007; it’s a better place to live now, and I can say that I think it will be even better in seven more years without feeling like a deluded naïf.

3) Historical context in broad strokes and the moments in which you feel this history. . .
In the second half of the nineteenth century, Grand Rapids was a furniture mecca. Michigan had a lot of trees to cut down, and lumber was brought here and made into some of the first mass-produced furniture in America. This is most obviously visible in the old brick warehouses near the Grand River, all now in varying states of disrepair or repurposing. It’s also visible in the Heritage Hill neighborhood, a residential historic district just east of downtown that was rescued from demolition in the late 1960s. If you’ve ever wanted to live in a beautiful Victorian mansion for less than $300,000, this is your neighborhood. The neighborhood association understandably wants to encourage owner-occupied homes, both to make sure residents are invested in the future of the neighborhood, and architecturally, to prevent any more houses from being hacked carelessly into multi-unit buildings. Of course, living in a Victorian mansion as a twenty-first century person is different than living in a Victorian mansion with your large Victorian family and household staff.

I love old houses (I’d like to have a one-hundredth birthday party next year for my less-than-mansion sized ninety-nine-year-old house), but my husband and I don’t have the know-how or patience to properly maintain a lumber baron’s mansion, or the income or willingness to pay the heating bills. And in terms of environmental sustainability, probably no single person or couple or small family should be paying those bills. But then what does that do to the sustainability of the neighborhood, the community, the visual and aesthetic landscape of the city? There were once certain kinds of money and people living here. Now there are other kinds of people, other kinds of money, and generally, people choose to spend that money elsewhere, in different ways. I feel this history every time I walk or jog through Heritage Hill (I live in a somewhat-less-historic neighborhood immediately contiguous), but I certainly don’t have any answers.

The furniture heritage also survives in office furniture companies like Steelcase and Herman Miller. So when you hear that NPR ad for the “Herman Miller Aeron chair in True Black,” for the one-millionth time, that’s a Grand Rapids product.

Apart from furniture, this region is the birthplace and corporate headquarters of Amway, whose founding families wield a great deal of power. Grand Rapids can feel like city-by-oligarchy, where buildings are named after successive generations of the same families to the point of confusion. If someone asks me for directions, I might need to figure out whether he’s trying to get to the DeVos Convention Center, the DeVos Performing Hall, the DeVos campus of the local community college, or the DeVos building on the local university campus. The DeVoses have all the influence that list implies, and then some. Another DeVos creation is ArtPrize, a massive annual art competition that transforms the city for a few weeks each year.

My husband and I recently sat down at a table of both Milwaukeeans and Grand Rapids residents, and were immediately asked what we thought the local Grand Rapids food specialty was. Beer, we answered, and the Michiganders cheered while the Milwaukeeans shook their heads. They’d been asking this question of every local who sat down with them, and kept receiving the same answer. They couldn’t understand either A), why GR would be so bold as to claim beer in front of a bunch of Milwaukeeans, or B), why we couldn’t understand that beer was not a food.

Caitlin Horrocks is author of the story collection This Is Not Your City, fiction editor of The Kenyon Review, and teaches at Grand Valley State University and the MFA Program for Writers at Warren Wilson College.

Image: “An ArtPrize entry in the Grand River, 2013,” by Oindrila Mukherjee