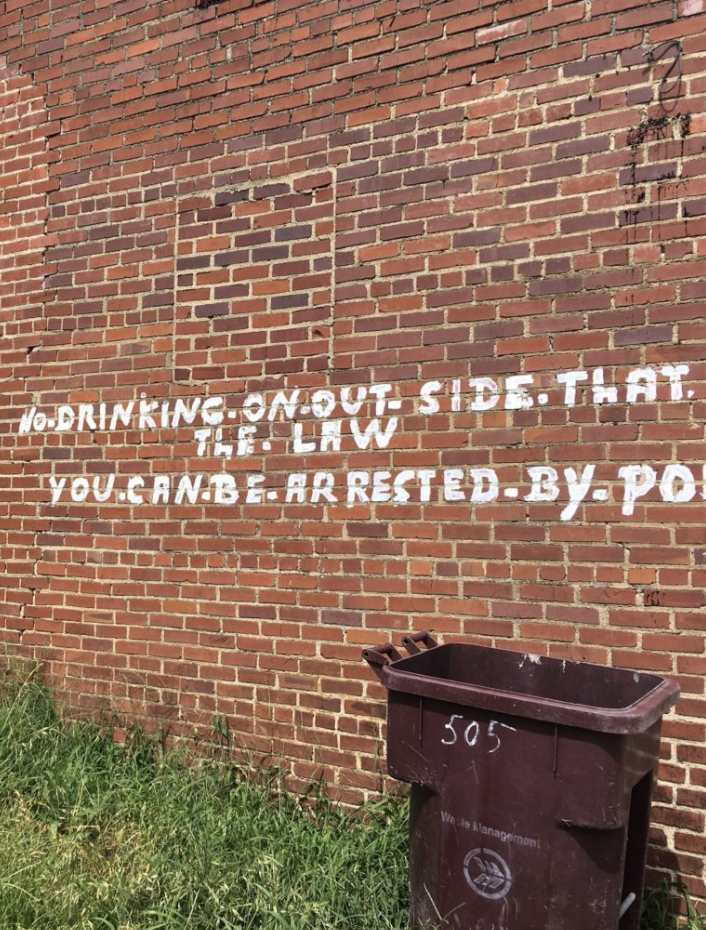 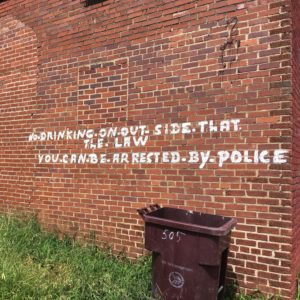 The catfish arrives curled and snarling with grease, alongside fat disks of white onion, green tomato relish and wrinkled packets of tartar sauce. I proceed through it clumsily, betraying my Northern-ness, but I guess that much was plain when I opened my mouth.

As if she’s read the questions in my notebook, the waitress wipes tables and worries aloud to her only other customer.

Landlord wants me to buy. Why would I? Never get rid of the thang.

Oh, I know it. The voice behind me is lilting and worn.

The gentlemen at the junk shop say they’ll be open ‘til the gossip runs out. They are roosting in mismatched rockers and the heavier one has kicked off his sport sandals—the kind of shower shoes that moms tuck into dorm-room caddies. His toenails are thick like bologna.

You’re not from around here, are you? he says when I ask where I might find a newspaper.

I am relieved to be found out. He offers me a secondhand paper, four pages in its entirety.

This town’s dyin’, they both say, more than once, during our ten-minute chat. They say it so evenly, almost bemusedly, like a person delivering a weather forecast. Suppose ta storm, gonna be a hot one, this town’s dyin’.

This dying town is Brinkley, Arkansas. Once, it was a railroad camp called Lick Skillet. Once, it was O-Gah-Pah Country. Once, it was nothing but shade beneath a massive tract of bottomland hardwood forest, where cypress trees grew wide as roller rinks. “Once, it was Brinkley,” people will eventually explain—a tiny figure in a nesting doll of disappearance.

For a couple years in the early aughts, people cared about this town. It was here, in 2004, that Cornell ornithologists claimed to have spotted an ivory-billed woodpecker, a charismatic creature that hadn’t been seen since 1935. The Lazarus bird, they called it, back from the dead. When word got out, the world descended on Brinkley and Brinkley welcomed the world it was so eager to rejoin. Journalists interviewed residents heralding an ecological, economic miracle. Both the bird and the town would be saved from the brink of extinction.

But then. No one was able to capture the bird on camera and soon the crowds thinned, trickled, stopped. Never mind what else the woods might have to offer besides the woodpecker, never mind what else the town might have to offer besides a cheap motel room. The only people who come around now are grandkids and people like me, curious to see what life looks like after a resurrection.

In the 15 years since the sighting of the ivory bill, the population of Brinkley has fallen by almost a quarter. As the residents have departed, the businesses have lined up behind them. The hospital, the Wal-Mart, and now, Fred’s, the pharmacy.

Some extinctions matter more than others.

At Gene’s, where the catfish is complicated but something special, the front of the menu still features an ivory-billed woodpecker and the hopeful slogan “we believe.” Fifteen years later, it feels more tongue-in-cheek than fingers-crossed, like Christmas decorations in February.

The junk-shop men don’t equivocate. There ain’t no damn bird, girl, says the barefoot one, momentarily lit up with a gleeful indignation.

It took Jesus four days to get around to resurrecting his friend Lazarus, who lived for another 30 years after his brief cameo in the Bible. According to some traditions, Lazarus never smiled again; his days of perdition had left him morose and resigned. Maybe, I think, driving out of town, rebirth is just too much to ask. Maybe, when you’ve really been through it, oblivion can feel a lot like a blessing.

At the city limits, a village of fireworks tents is blooming in a weed-choked parking lot. Folks are lining up for their Independence-Day cache. In a few nights the flares that illuminate the sky above Brinkley will be visible for miles, if only for a minute.

Ashley Stimpson is a writer based in Baltimore, MD. Her essays and articles have recently appeared in Entropy, Cagibi, Belt, and Atlas Obscura. Read more of her work at www.ashleystimpson.com.