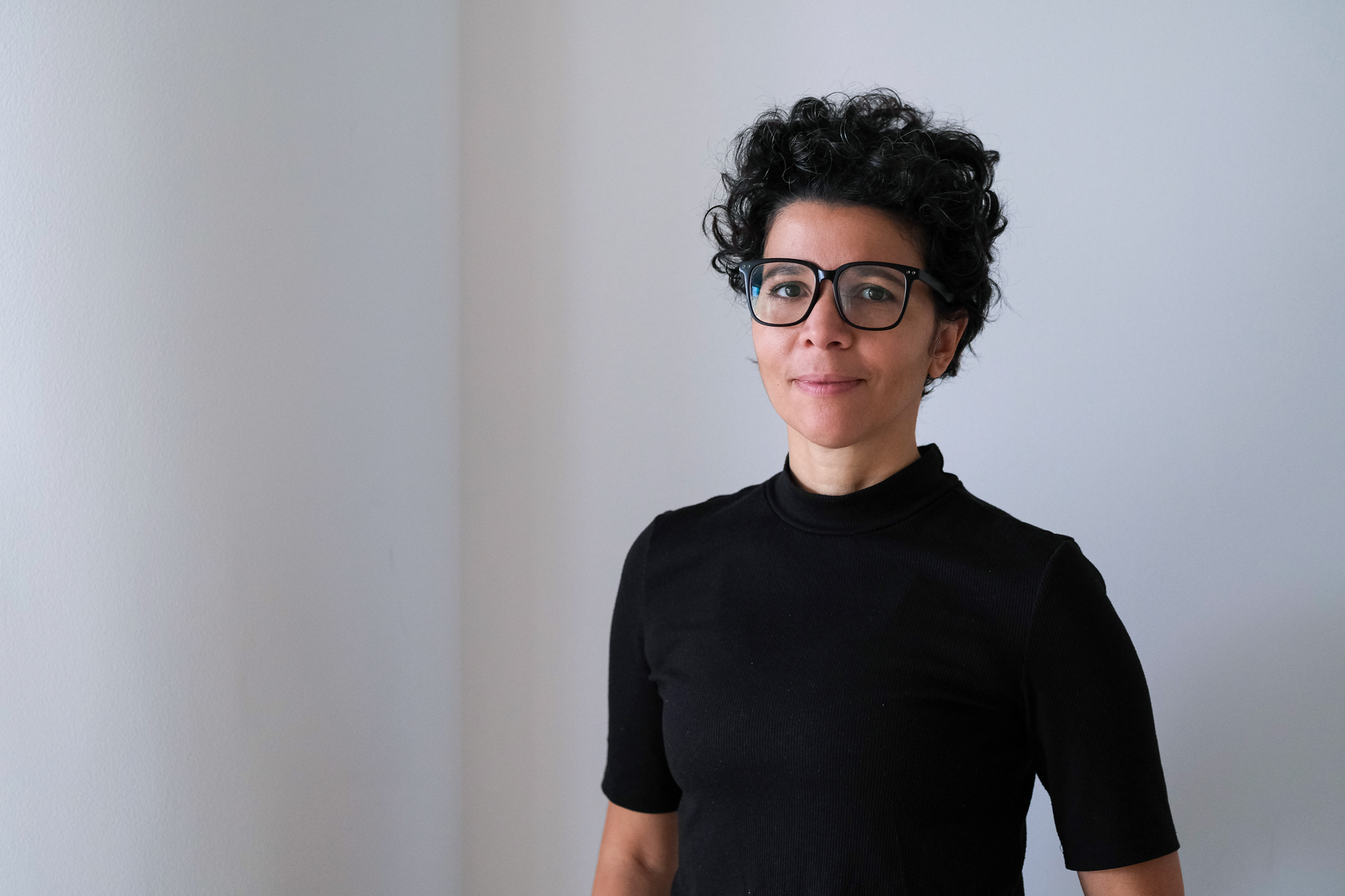 She devoured tiny Americans that slid out of a vending machine. Their thin metallic plastic packages almost opened themselves when punctured. Emerging with their tiny hands on either side of the rip, they declared their nutritional value (calcium, sugar, fat, 350 mg of synthetic protein). So many times she decided to diet and promised: no more Americans. But she always walked by, with an eye on the spot between the Ruffles and the Doritos, salivating. And before thinking, there she was again, inserting the coins, hot and sweaty from her palms, into the machine’s mouth.

The first had been a pinkish, overweight man—flowery shirt, white sneakers, and socks biting at his thick ankles. He laughed and talked to invisible friends, pointing at things only he could see. He didn’t notice when she lifted him up, index finger and thumb under his damp little armpits. Holding a selfie-stick with a phone the size of a lentil, he posed in front of her giant, open mouth, as if she were the Statue of Liberty. Right after the timer triggered the picture, Béia swallowed him whole.

The machine had always been there. But she had never given it much thought before that first time, the first Monday of the year, a January polar vortex morning, so cold it felt cruel. She hadn’t slept well after a phone fight with her ex-boyfriend. Her kitchen sink had been full of her new roommate’s dirty dishes topped by a lipstick-rimmed wine glass. Béia had not been able to gather the appetite for breakfast or the energy to figure out a packed lunch. When she got to the hospital and began work, the back and forth of her mop over the speckled light-green floor carried her like a current to the corridor, the familiar yelling of Fox News gradually fading as she moved away from the waiting room. And there, she found herself alone with the machine, its chocolate, chips, and Coca-Cola shining bright under the strategic white light.

Propping her hand and chin on the mop handle and facing the machine, she grew angry. She thought of the long hours in the hospital with that stringy, wet head, disgusting even when soaked in pungent disinfectant. The lazy roommate who’d replaced her boyfriend. The money she never managed to save. The many times she’d stayed quiet or smiled or thanked people without wanting to. The child, house without a fence, dog, and wedding that went down the drain in a counterclockwise swirl before ever happening. Grinding her molars, she hunted for coins in the pockets of her ugly uniform. And even though she was hungry, she was driven as much by rebellion as hunger. She wanted to do something she was not supposed to do.

She hadn’t planned to come back the very next day. Before things had turned in her life, she had always brought fruit, rice, and beans, which she cooked simply but with care, pre-frying the grains in garlic and onions, a couple of bay leaves infusing a subtle fragrance to the beans. But in the past few months, it had been so difficult to do anything. And that day, a few minutes before lunch, she was putting away her basket with the cleaning cloth and spray when a hand tapped her three times on the shoulder. The pale woman sucked a bright pink liquid from her see-through plastic cup and see-through straw. Without interrupting her suction, she indicated with the bottom of her cup and a raise of her eyebrows a broken version of her beverage spread out on the floor. Ice cubes slid on a pallid pink puddle between the dome lid and the body of the cup, opened wide like the mouth of the woman’s child beside her, who now screamed for his lost drink.

It was almost lunchtime, but she couldn’t leave the mess there. Somebody would sue, or she’d get fired, both things easy to happen in the U.S. The woman interpreted Béia’s hesitation as a lack of understanding. Her lips let go of the straw, and she tried to explain: “Limpiar? Por favor? Gracias!” Béia nodded, gave the woman a deflated smile, and went after the orange cone, the bucket, the mop.

Béia had a meeting at two where they evaluated goals and objectives against performance for everyone in her wing. As she waited in the long cafeteria line, she could not stop thinking of the three taps on her shoulder and the screaming child. She had a secret thought, which embarrassed but consoled her a little: the truth was, Béia didn’t even like children. But the consolation was diminished by the correction that followed: Béia only knew she didn’t like other people’s children.

Hungry and impatient, she stepped out of the line and returned to the machine. Out of the package came a cowboy with muddy jeans, boots, and a hat. He licked his index finger and lifted it to feel the direction of the wind. When she picked him up, he was shielding his eyes from the imaginary sun, his hands resembling a salute over his eyebrows. Facing her mouth, he concentrated on the horizon as if searching for an approaching hurricane.

She knew eating from a vending machine was unhealthy. But she had so little now. Even if the satisfaction she got was brief and superficial, it was something, something she could give herself. So she went back. Three more times that week. And four the following two weeks, after 15 she made a pact with herself to alternate days. Sometimes during lunchtime, sometimes at the end of her shift, and in the worst days, earlier, in the mid-morning. She swallowed an aging Southern belle—blond, skinny, and lipsticked—in tasteful clothes. A woman whose hair needed washing, wearing Minnie Mouse ears and carrying a Dora the Explorer backpack. A bearded hipster holding a bottle of craft beer. He seemed to be in the middle of giving a disinterested but intelligent opinion, the punchline indicated by an unenthusiastic raise of his eyebrows, just before she swallowed him. It became a difficult habit to stop, an annoying and persistent urge, like a mosquito bite that kept itching even after the skin had been scratched raw.

She managed to spend the first week of March away from the machine. A small accomplishment that reassured her that she could stop anytime. If she wanted to. The following Monday, she was finally feeling good and well-rested. Humming an Anitta song in the laundry room, she grabbed a pile of warm cleaning cloths from the dryer, then went to one of the windowed patient rooms, where she sprayed the cleaning product and started wiping the windowsill. Someone had brought a mixed spring bouquet for the patient who slept under the soft sunlight. She was a thin woman, probably in her 20s, who looked healthier than when she’d arrived a few weeks before, despite the clear plastic cannula still attached to her nose. Béia rearranged the bunch a little, spacing some of the flowers. She took out a limp, dying lilac and threw it in the trash. The bouquet looked fresh again, and the room clean, pleasant even. She left 18 in good spirits. The hospital was not very busy that day, the corridors calm. She decided to take five minutes to sit outside at the small patch of garden on that sunny day, even if it were still cold. The machine was on the way. She thought about what Rosa and Patricia had said. Maybe she should enjoy herself a little more. This was her life now. She bent over and grabbed a packet from the chute of the machine and went outside.

Ananda Lima is the author of Mother/land (Black Lawrence Press, 2021), winner of the Hudson Prize, and four chapbooks. Her work has appeared in The American Poetry Review, Poets.org, Kenyon Review Online, Gulf Coast, Witness, The Common, and elsewhere. She is the inaugural WIP Latinx-in-Publishing Fellow, sponsored by Macmillan Publishers. She has served as staff at the Sewanee Writers Conference, and as a mentor at the New York Foundation for the Arts (NYFA) Immigrant Artist Program. She has an MA in Linguistics from UCLA and an MFA in Creative Writing in Fiction from Rutgers University, Newark.