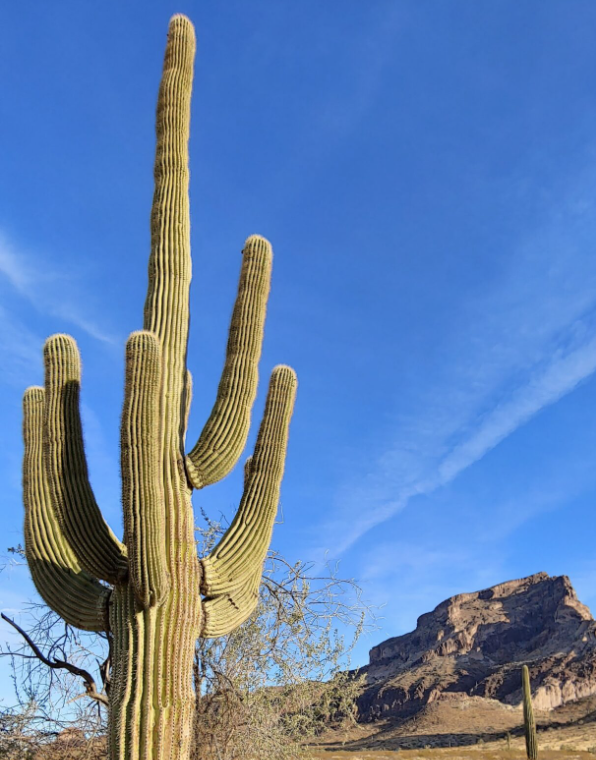 There is no noise. It’s an adjustment from living in the city where quiet included police helicopters, fire engines, and sports cars speedshifting down Indian School Road. Stars fill the sky again, no longer competing with the electric glow of five million inhabitants, and the constellations stand out from the fainter lights, the long path of the Milky Way arching rim to rim, so that you understand how they became known in prehistory.

Saddle Mountain looms black on the southern horizon out our front door, its shape true to its namesake. During the day, you can make out tall cactuses with outstretched arms growing along ridges up to the summit, and at sunset, the mountain glows red with its deeply cut face drawn in contrast as the shadows lengthen. Its presence is a comfort, a reference point distinguishing where you stand in comparison to the expanse of the barren scrub springing up near dry washes snaking across the desert plain.

Almost two weeks ago, we sold most of our belongings and transferred life into the 1975 Terry Taurus Travel Trailer we’d spent the last 5 months renovating. It’s strange to have a home but no permanent address. Like permanent means anything in that statement. I’ve had several in my life. Job loss, relationships, happiness, health—or the opportunity to gain those same things—can move people from where they laid down stakes. Maybe they should change it to ephemeral address on official forms, though removing that illusion of stability might send the suburbs into unrecoverable existential dread.

We’re camped on public land run by the Bureau of Land Management where people can stay for 14 days without charge. There is no water, trash, electric, or toilet. Only what you bring with you. Some arrive in second mortgages on wheels with every convenience you’d find back home in the cul-de-sac. Others arrive ramshackle in beat up vans held together with bungee cords, JB Weld, and prayers. There’s no HOA out here.

The only requirement is the means to move to a new spot at least 25 miles away after the two weeks are up. It’s that mobility which sets us apart from being squatters. Everything is about nuance, in the same way that it’s socially acceptable to say we’re “digital nomads traveling the country in our self-renovated vintage camper” instead of “aimless artists who quit their corporate jobs to write and draw and take pictures.”

Historian Frederick Jackson Turner said that the frontier shaped the personality of America. It defined the people of this country, because no matter what happened to you in your life, you could always move west and start over. In 1890 he pondered: what would shape us going into the new century now that the frontier was gone? Well, I can tell you, Fred, from the far side of the 1900s, some of us are still seeking the frontier, even if it looks a little different. Campers and vans and converted school buses, roaming these paved and unpaved trails like modern day Conestogas, looking for a nice level spot to camp for the night, access to good water, a local trading post, and skies that aren’t cloudy all day.

Two months ago, there was an insurrection at the Capitol. The pandemic is worse than ever. People doom scroll on their phones late at night, ghost faces bathed in blue light. They feel shame for not posting enough of their concerns on social media or fear they’re virtue signaling when they do. I keep returning to something Francois Truffaut said in an interview once: “In troubled periods the artist hesitates; he is tempted to abandon his art and to make his art subservient to an idea. He becomes a propagandist. When this thought occurs to me, I think of Matisse. He lived through three wars untouched, having completed his life’s work—his fish, women, flowers, landscapes framed by windows. The wars were trivial events in his life. The thousands of canvases were the serious events.”

At the base of the mountain standing watch outside the window as I write this, there are ancient petroglyphs drawn on the rocks by the Hohokam people who engineered the most extensive network of irrigation canals in North America hundreds of years before Europeans arrived on the continent. Their culture thrived in this desert for more than a thousand years and then they vanished from oral and written histories, probably moving on to seek new opportunities, to flee from old pain. The word Hohokam means exhausted or used up in the language of the Pima, who came to this place after the Hohokam culture disappeared.

As I take evening walks here among the scrub and cactus, I think of them. They walked the same ground, found shelter here at the foot of these hills. Stopped long enough from whatever work they were doing to etch images of their world onto the rocks. Now their wars and disputes are forgotten. The names of their great leaders and deplorable villains are unknown. But those drawings of birds, animals, spirals, people, and the sun are still here. It is such a human desire to leave a mark. What will be our thousands of canvases?

James Alan Gill’s writing has appeared in Colorado Review, Crab Orchard Review, Midwestern Gothic, The Common, and Prime Number Review, among others. He is currently working on a novel and lives full time on the road with his wife Brittany.