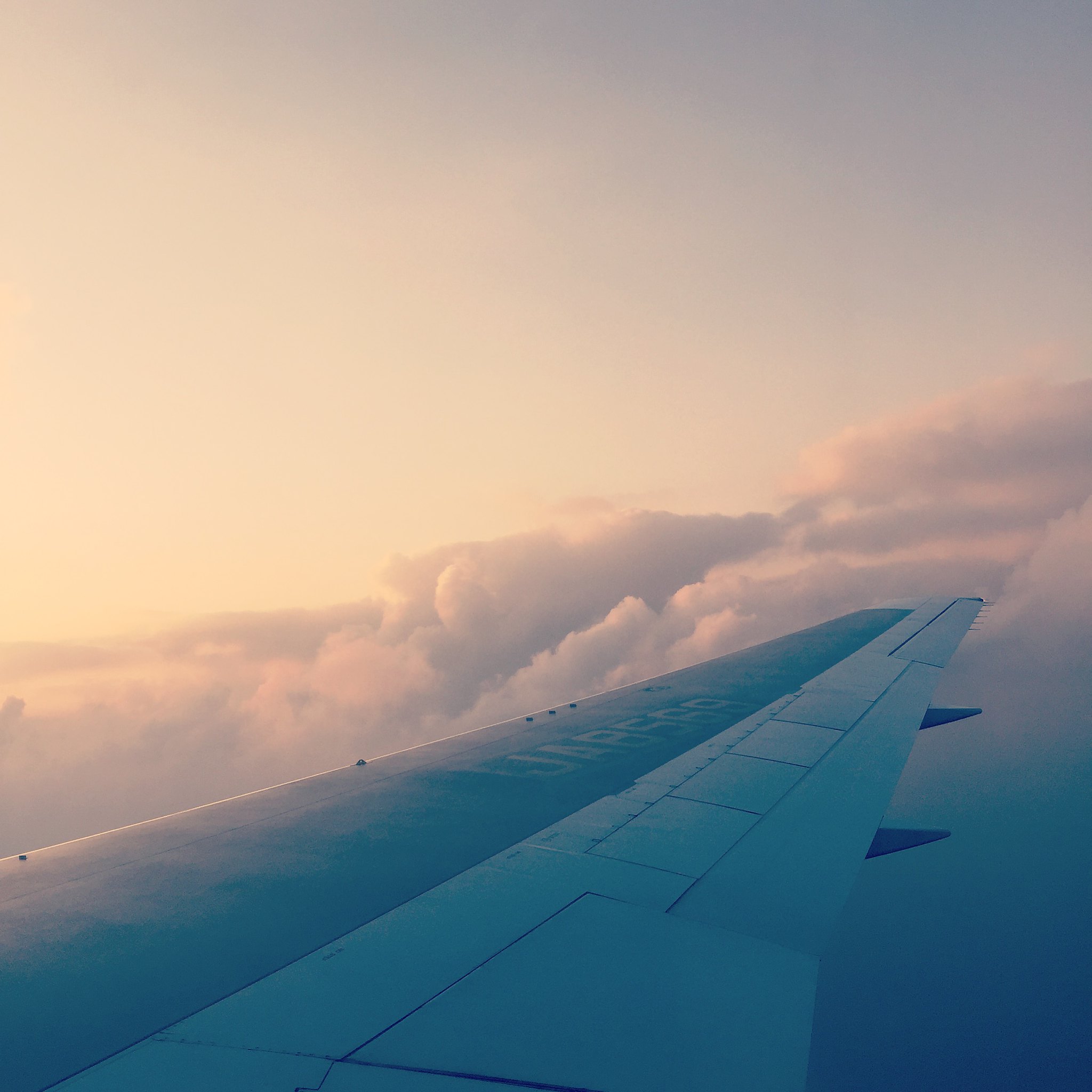 Start small. Your brain created this mess; it can get you out. Right?

The key must be to think the right thoughts. Your elaborate rituals have so far kept the airplane from nose-dive and tailspin, but they don’t prevent that boulder of fear from implanting itself cozily in your gut weeks ahead of any flight. You first notice its presence the year your annual life tally reaches nineteen, the year the solid base of your adolescent invincibility begins to erode under waves of ontological dread—like this whole time it was just made out of stale bread, not stone at all, and now it’s sogging apart.

You attempt to chip away at the new strange tumor that travels with all your travels: this lump of terror that replaced the hard fearlessness of youth. Remember reassuring conversations you’ve had with aeronautical engineers about how adeptly airwings support airtrunks. Feel implausibly comforted by the opening scene of The Satanic Verses. Recite statistics to yourself about the low likelihood of crashes. (Facts are true, right?) Remind yourself that you sometimes smoke cigarettes but manage not to be whirlpooled into a spiral of poisonous red-hot death-fear each time you light one. Despite your best efforts and the planes’ invariable safe arrivals, the rock regenerates like Prometheus’s liver, so you must turn to other methods.

Learn anew the value of alcohol as a fear-eraser when you are finally old enough to order wine on flights. Spend countless hours obsessing about getting to the airport early enough for a pre-plane airport-bar drink. Leave your favorite white oval-frame sunglasses in the seat pocket on a flight to England because you were senseless from tiny-bottle wine. Discover your favorite airport drinks (bloody mary, dirty vodka martini) and your favorite airplane drinks (gin and tonic, white wine spritzer). Then wish there was a way, upon disembarking, to not feel so much like the exoshell of an insect whose insides have been sucked out by a hungry spider. Complain; express your worries (activities you excel at). “Borrow” your first Klonopin from your helpful, legitimately prescriptioned friend before your next flight. Take it and some interval later begin to feel slow and heavy. Put down the notebook you’ve been documenting your fears in. Lean your head against the small plastic window. See that your knuckles have clutched the seat during your bumpy water approach, but find no chest-drowning panic waves to bail out.

Visit your doctor to ask for more Klonopin. Get “forced” by an excellent health-care system you take for granted—as we do all good things until we no longer have them—to attend “exposure therapy” as a prerequisite to being given more Klonopin. Meet weekly with a therapist whose name is strikingly similar to Heidi Klum’s but whose rest of self is, unsurprisingly, not. Take paid-time off from the cush office job you also take for granted to attend these sessions. Learn about cognitive distortions like “thought-action fusion” and “catastrophizing.” Feel relief that named categories outside of your head exist for these emotions, like suddenly you are setting down a very heavy carry-on tote. Sing loudly in your car to and from the sessions and think about the boy you’ve fallen in love with. Go grocery shopping afterward to buy roast chickens and root vegetables and wine for the two of you to have for cozy dinner together. Prefer these trips to actually being in the office. Use that as incentive to keep going to therapy.

Do your homework: Watch footage of planes crashing. Read transcripts of planes crashing. Stare into the abyss of the black box. Look up at the sky and imagine the little mechanical birds that criss-and-cross it bursting into flame before your eyes. In fact, tell them to: command that they explode, because that’s what not-Heidi Klum has asked of you. Notice that they do not listen, their trajectories smooth and blue. Find that you love them, their cute metal faces, in that same way you love robots or objects that are simply miniature versions of other objects. Dream (nightmare) up your own worst-case scenario and mentally relive (re-die) it every day by recording it into your own black box and then playing it back to yourself over and over. Have a long talk with a remarkably competent psychologist at not-Heidi’s clinic about half-lives of drugs and the idiosyncrasies of benzodiazepines.

Finally get your very own Klonopin and Xanax Rx (NO Valium or Ativan for you: they take off no edge and leave a rim of nausea). Find you need the drugs less because science turns out to be useful: exposure therapy works. Your dread no longer extends for a longer timeline than the trip itself. Sometimes a simple bloody mary at the airport bar is enough.

Leave your office job and the silly college town you grew up in. Move to an urban paradise/hellhole you didn’t realize was your true home until the moment you got there. Get a much worse office job. Leave that one. Lose that boy you loved. Get very sad. Get over it. All this getting means you start to “get” it: the value of uncertainty, the gift of loss. Stop obsessing about pilots’ credentials and watching flight attendants’ brows for signs of furrow. Notice that each time you thought this time was THE time—because of all the SIGNS clearly SIGNALING that it was—it wasn’t actually the time, but just a time. It’s always a time. Only one of the times will it not be.

Spend some years doing difficult freelance work for low pay until you can do less difficult freelance work for better pay. Reward yourself: Go to Turkey for your first-ever solo-trip. Talk to strangers. Get lost. Find your way. Drink and laugh and feel the physical joy of freedom in the streets of Istanbul. Take Turkish buses while reading an Orhan Pamuk book about reading a book and taking Turkish buses. Leave Turkey to fly to Greece one beautiful morning and realize this is the first time you’ve flown without a drug or a drink since you first friended substances. Feel the blue of sky and sea you see through the window forming new neural pathways in your brain. When you meet your family on Corfu, roll your eyes at your father’s fear of flying, because it’s so clear when it’s him just how small and silly it is. Leave Corfu on another morning flight unplagued by demons. Buy tiny strawberries in Athens. Fail to realize just how beautiful you look in that teal dress, but maybe get an inkling. Feel lonely. Find it’s a feeling you don’t always mind. Take pictures of yourself in the mirror.

Get right with death, or righter anyway. A plane crash is not the worst way to go.

Come home, at last, on an 11-hour flight you have never been more excited to just sit through because your legs are so tired from the losing and finding. Lie in your home-city’s park grass with a new man one summer night and decide you will be together-together. Hear a news story about a plane crash and don’t take it personally. Go to Coney Island with a friend who recently came much closer to death than an airplane’s ever taken you, and agree to do what most scares each of you: ride the Cyclone together, then the Wonder Wheel in the swingy-swingy car you always swore you would never go on. Scream a lot together. Live through it together.

Take trips. Years’ worth of trips. To cities and islands and fields and shores. Jump off a sailboat into the ocean, then another sailboat into another ocean. See a stingray and flee but force yourself to go right back underwater. Swim feet from a beautiful white jellyfish bigger than a birthday-party balloon. Fly to and from Asia two times in one half-year: flights that stretch the limits of what a plane can do. See the sun set twice on one plane ride. Earn airline “status.” Feel as liberated by your cleanup of your own brain’s mess as you are by your ability to criss-or-cross the earth in 15 little hours.

Yet, though you stopped needing the drugs years ago, that kernel of deepest-you buried within your other layers knows: you are still hiding. A small voice that is somehow yours says: you can stay here forever because you are scared, or you can move forward although you are scared. If you don’t listen, that cocoon you’ve spooled around yourself will soon become too tightly wound. If you’re ever going to make it out, you must go now. Go! Now!

Leave the man you were with. Leave your stable life. Leave your home, leave your city, leave your country, leave the places you’ve departed to. The skyscraper sums you used to pay to stay put in your hellhole-paradise city you now trade for propulsion through space and time. Look back, sure, but don’t forget to re-right your gaze; the secret to getting anywhere is to look toward where you want to go.

How long you’ll continue is hazy. If not where, at least the why seemed clear at first, then grew fuzzier, then sharpened again. You depart. You arrive. Gone is the crispness your first trips had. You’ve made a routine of leaving routine. Barely look up from the New Yorker when intense turbulence hits and the flight attendants scamper to their seats.

The details fade, form part of a greater portrait, impossible to see clearly from here, the way the inherent geography of earth’s landscape only becomes apparent from above. How do fields make such perfect circles? Ocean waves like dragon scales? You feel these borders blur, with each year forward, each flight forward.

If you have to die somewhere (and you do), why not up there—in forward motion, encased in this treasured, suspended place, between being and becoming, then and now, A and B, here and there, below and above, above and beyond, self and other, a space that exists nowhere else, the space of your greatest advances, where you’ve most loved the gift of the world and the life it gave you? To truly be away is something you can always chase, but cannot catch with simple distance.

Congratulations. You will keep going until you stop.

Sarah Van Bonn is a freelance writer currently based in Berlin. Her work can be found in The Southampton Review, The Rupture, The Boiler, Vol. 1 Brooklyn, Hobart, and elsewhere.

OLIVE AMDUR
I had one recurring nightmare as a child: I am standing in the dry bed of a creek looking upstream, the sun shining and the stones warm on the bottoms of my feet. Suddenly, a roaring wave rushes toward me around a bend and I have no choice but to be swept along with it.

CLINTON CROCKETT PETERS
In the cosmology of Patrick Burke, a flat-Earth believer, humans can spoon-eat uranium flakes like Cheerios. The Hubble Space Telescope never existed, nor did dinosaurs. Hiroshima was dynamited, the Titanic sunk for insurance.