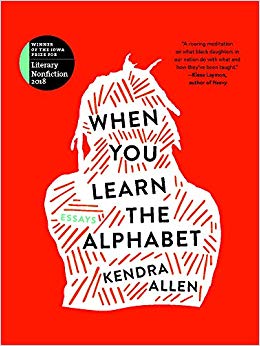 The Common is a proud recipient of a Whiting Literary Magazine Prize, and our staff are ready to celebrate! In conjunction with the Brooklyn Book Festival, you’re invited to join Whiting Prize winners The Common, Black Warrior Review, American Short Fiction, The Margins (Asian American Writers Workshop), and The Offing for an evening of literary merriment at LIC Bar in Long Island City. Event details can be found here.

If you’re already as excited as we are, please enjoy this month’s Friday Reads as a special treat – featuring reviews from editors at all the winning publications.

Recommendations: When You Learn The Alphabet by Kendra Allen; Two Lives: A Memoir by Vikram Seth; The Year of Blue Water by Yanyi; Shade It Black: Death and After in Iraq by Jess Goodell; A Feather on the Breath of God by Sigrid Nunez. 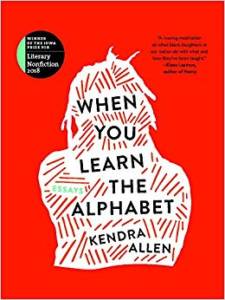 When You Learn The Alphabet by Kendra Allen; recommended by Mark Galarrita (Editor, Black Warrior Review)

Winner of the 2018 Iowa Prize for Literary Nonfiction, Kendra Allen’s debut When You Learn the Alphabet begins with the powerful essay entitled “Dark Girls,” which reflects on her origins:

“My daddy’s side of the family has blood made of craw daddies
bayou waters
red bones
big waves of silk.”

When I was born I came out looking just like them. I could pass as masta’s daughter, just like them. The first picture I ever took fresh out of my mama’s womb, looks just like them: a Louisiana Creole French-tongued thoroughbred. My eyes are closed so tightly you can see the wrinkles on my eyelids. I looked tired already. My hands are palm up, pressed closely to my ears at a few minutes old. I was born into surrender. My skin, almost the color of spoiled milk, thick and light all at the same time. Bubbling and burning, all at the same time”

Throughout the essay collection, as she does here, Allen skillfully draws from the well of her milieu. She combines stories, cultural criticism, poetry, pop culture, and memoir all in one. Her astonishing essays deploy sharp wit in one line and distinctive lyricism the next. I often stopped to highlight the magic of her prose, underlining the effectiveness of her layered sentence style such as “I tell him I love him. I hug him with one arm. My mama has always called me the child of half-truths,” and in the next moment “Answer the question: In fifth grade, when you were asked to identify your race on the test, why did you circle other?” Whether she examines Gillian Flynn’s Gone Girl, her family, life in Texas or Chicago, or the depiction of Black Women in Ice Cube’s The Player’s Club, Allen’s talent is in her combination of tactful self-reflection blended with her pulsating urgent voice that demands your attention.

The Iowa Nonfiction Prize judge Kiese Laymon, author of Heavy and How to Slowly Kill Yourself and Others in America, described her debut as “a remarkable artistic achievement.” And it is. Kendra Allen, read her work. Know her name. 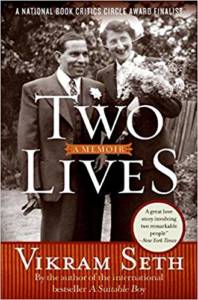 Two Lives: A Memoir by Vikram Seth; recommended by Jennifer Acker (Editor in Chief, The Common)

Shanti Seth and Henny Caro met in Berlin in the 1930s when Shanti arrived in the city from India to study dentistry. He rented a room in the Caro’s home and became close friends with their circle of both Jews and Gentiles. But then the Third Reich’s policies prohibited foreigners from holding jobs and Shanti emigrated once again, this time to England; Henny escaped, too, in 1939, just as the Nazi’s were closing in on Germany’s Jews. The two survived the war, although Shanti, fighting for the British, lost his right arm at the famously brutal battle of Monte Cassimo in Italy.

From this crucible, a close friendship evolved into a fascinating and mutually supportive, if not mutually passionate, marriage. The story of their lives and their partnership–including Henny’s assistance alongside the dental chair–is told by Shanti’s great nephew, Vikram Seth. The couple married too late to have children, and they doted on Vikram, who lived with them in London for both long and short stretches. In this marvelous book, which captivates despite knowing how all the history will turn out, Seth brings us inside an unusual postwar marriage, revealed in scenes as well as detailed letters, in which each has suffered stark and devastating losses and yet soldiered on. Seth pulls back the curtain on their flaws (each is somewhat formidable and domineering, shaded by their respective German and Indian upbringings) and their griefs, which many close to the couple never saw or well understood while they were alive. We learn that their marriage, while imperfect, was the source of their resilience. We see how their tragedies were born through the simple daily acts of living, working, eating, and traveling together in the here and now, even if some of their darkest thoughts remained unspoken. I found these pages stirring and beautiful. 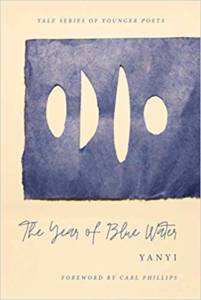 The Year of Blue Water by Yanyi; recommended by Luther Hughes (Executive Editor, The Offing)

When I think of prose poems, I ask, often, how will this poem surprise me or, more likely why is this poem not lineated. Sometimes said poem feels as though it would work better lineated, because it seems the poem is only in prose form to enact some surprise or, quite possibly, the poet couldn’t find the exact form to fit the poem, and therefore is formless. However, when I read The Year of Blue Water by Yanyi, I am embarrassed to even had thought these poems would be that: formless or reaching for surprise. For me, Yanyi creates a book that leans into form and rejects surprise; the book addresses themes such as community, self-reflection, the body, and, well, literature. And for these themes, the prose poem fit quite naturally because each of these themes deal with framework and togetherness; whether that be a collection of sentences working together to create meaning as does a group of people work together to create community, or how the body moves through the world in its frame as the prose poem works inside a frame to create meaning. Even more so, what really surprises me is not that way these poems push the prose form, but it is the quotidian-ness of each poem. The “everyday” language of each poem forces me to think about how I move throughout the world, how I communicate with people, and, even more so, how I push outside multiple frames. And, like the best of poems, I begin to question what it means to be alive. Okay, so what am I saying? I think Yanyi writes it best when he says, “Form gives space for something to exist. You have to dig in yourself to find what you’ll put in it. Places you don’t know appear. Poems are a way to ask for what exists, to invite what wants to be visible.” 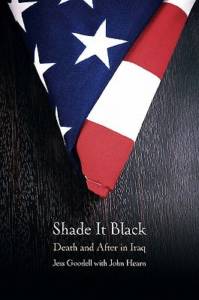 Shade It Black: Death and After in Iraq by Jess Goodell; recommended by Nate Brown (Managing Editor, American Short Fiction)

In an age when women play critical roles in military operations, the overwhelming maleness of writing about Iraq and Afghanistan is telling. Of the dozens of notable fiction and nonfiction titles about our nation’s nearly two decades of war, Jess Goodell’s Shade It Black: Death and After in Iraq is a standout not simply for its stark reportage but for Goodell’s ability to explicate many esoteric elements of military culture as they’re experienced by a young woman. A volunteer for the Marine’s first-ever Mortuary Affairs unit serving outside of Fallujah in 2004, Goodell deftly and movingly defines elements of Marine culture that may be shocking to most of us: the intense focus on excellence and standards, the body-shaming of those perceived to be overweight or unfit; the fear of being raped by fellow service members that’s felt by women deployed to forward operating bases; the endemic belief that women Marines (nearly always denoted as “female Marines”) are lesser than their male counterparts. For so many of us at home, the wars have been defined by what we’ve read in newspapers, witnessed on cable news channels, and discovered in novels and memoirs, but most of those works have been written by white men. This isn’t to say there aren’t powerful works by service members, veterans, journalists, and civilian novelists alike—of course there are. Novels like Ben Fountain’s Billy Lynn’s Long Halftime Walk, Elliot Ackerman’s Green on Blue, Cherry by Nico Walker, The Yellow Birds by Kevin Powers and nonfiction titles like George Packer’s The Assassin’s Gate, Nathaniel Fick’s One Bullet Away, and Evan Wright’s Generation Kill have come to shape our understanding of the wars, but what’s missing here is obvious: the voices and experiences of women and people of color. While Goodell herself is white, her contribution to the body of American-authored war literature is astounding for its honesty and clarity about the particular difficulties faced by service women. Of course, this necessarily raises another question about contemporary writing about Iraq and Afghanistan: the military is diverse, especially in the enlisted ranks, so why aren’t we seeking out and publishing the reporting, the memoirs, and the novels our nation’s non-white service members? 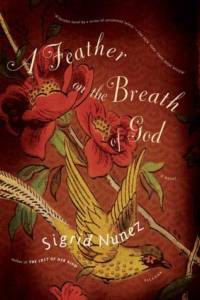 A Feather on the Breath of God by Sigrid Nunez; recommended by Yasmin Adele Majeed (Assistant Editor, The Margins)

Sigrid Nunez’s A Feather on the Breath of God was recommended to me by a friend a few months ago. We were talking about The Friend, Nunez’s National Book Award-winning novel, which I read in one satisfying gulp last winter. It was my first Nunez, and upon finishing the book I knew I had found a writer who I would return to again and again. The even, clear quality of her prose, the carefully stitched together narratives, her women. This is one of my favorite parts of reading: the discovery of new companions. I found it in The Friend, and found it in A Feather on the Breath of God, too.

The first surprise of the novel was how much of my friend’s writing I saw in it. I had read her manuscript earlier this year, and when reading Nunez I recognized how much A Feather was a touchstone for my friend’s work. The spare, matter-of-fact voice, the filtering of parental history through the incomplete memory of the narrator, the tracing of the ruptures of language and immigration, and the telling of immigrant stories as love stories and familial heartbreak. I could hear the echoes of Nunez in my friend’s writing, and conversely, my friend’s work spoke through Nunez as I was reading. And I think this is my other great discovery of Sigrid Nunez, is that when I read her I can always hear women talking—about their love, their funny lessons, and their literature.