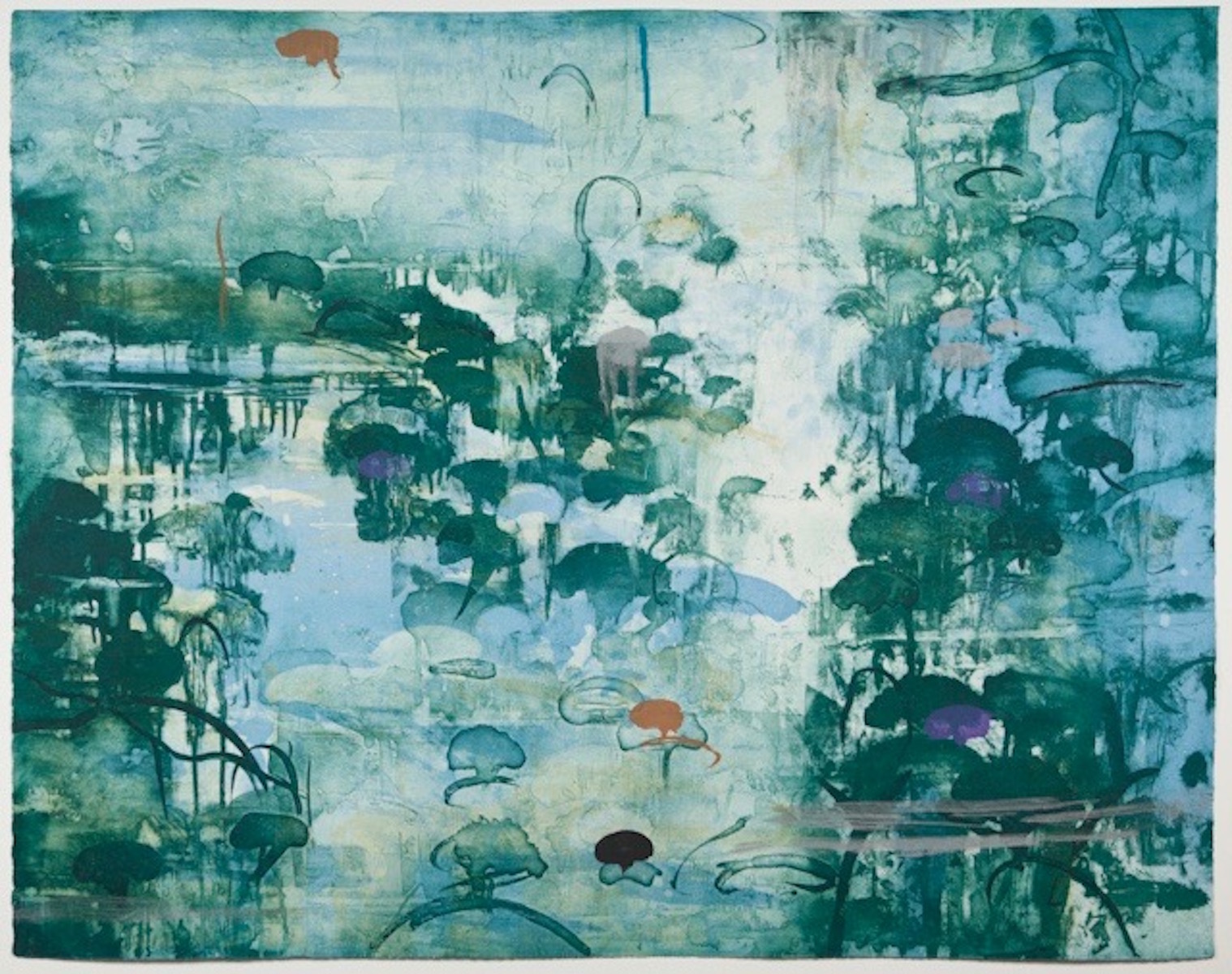 Three weeks ago, I had an intimate and frenzied encounter with a wild bobcat as it was chasing my chickens. We locked eyes for a moment, and I quickly glanced down at its large, impressive paws. Tawny, speckled fur contrasted starkly with razor-sharp black claws. It ran off to the edge of the woods, first stopping to glance back at me before disappearing into the thicket. I began to think of a series of intaglio prints that would capture the essence of this feral fury.

I always work in series. It’s how I develop and investigate ideas: a journey with the departure recognized but the destination unknown. My work begins with observations and research of petroglyphs, natural forms, flora, and fauna. I travel through the woods, deserts, and mountains to view them, including California’s Palomar Mountain and Anza-Borrego Desert State Park and, more locally, the water’s edge at Embden and Machias in Maine. Recently, I’ve been looking at the birchbark pieces of the Passamaquoddy artist Tomah Joseph and the serigraph prints of Maud Morgan and Ray Parker. Often, I’ll have a seed of thought—working with notions of resonance, balance, and continuum—that grows and develops as I move from piece to piece.

I am an intuitive mark-maker. In printmaking, I prefer not to do preliminary studies but instead to work directly on plates and blocks to keep the work fresh and alive. It’s only when I see certain shapes, colors, and lines together that I can start visually problem-solving. Biomorphic forms merge with calligraphic lines; some shapes appear animal-like, while others reference utilitarian tools. In the Hark, Cadence, and Continuum series, space is both flat and dimensional; elements are both imagined and seen, still and moving. The prints are a combination of various techniques, including monotype, cognate, lift-ground aquatint, and pochôir. The colors are layered and often transparent, muted but with accents of vibrancy. I’m frequently asked, “How do you know when a work is finished?” If nothing can be added or taken away and the work has a life that seems unique, I keep it. I push images to the edge of the creative cliff; they have the most power when they hover close to the edge. A quote by T. S. Eliot is on my studio wall: “Genuine poetry can communicate before it is understood.”

I was introduced to Michael Mazur’s work as an undergraduate and was immediately taken by his draftsmanship. Fluid, free, and masterful lines navigate the contours of nude figures and the emotive content of his prints. Mazur’s mentors Baskin, Gabo, and Peterdi resonate in his work, as does the German artist Kathë Kollwitz. At times his mark-making is aggressive and agitated, as in the intaglio prints of the Closed Ward series of the early 1960s. This series of prints and drawings was initially inspired by a “deeply unsettling” incident that took place while Mazur was an Amherst College student and a member of a singing group entertaining residents at the Veterans’ Administration Hospital in Northampton, Massachusetts. Mazur carried the memory of this traumatic experience for years. He then produced an extremely powerful body of work speaking to issues of psychological angst and physical and emotional confinement. This series is as impactful as Goya’s Disasters of War.

In the mid-1980s, Mazur read The Chinese Garden, by Maggie Keswick, and “had an epiphany” that inspired him to make a trip to China in 1987. After a Chinese Scroll was inspired by the 13th-to-14th-century Yuan Dynasty scroll painting by Zhao Meng-fu as well as Mazur’s deep, abiding respect for traditional Chinese gardens and landscapes. This print uses four matrixes—one wood relief and three copper aquatint plates—creating an atmospheric glimpse of the landscape with an expansive spatial depth. The calligraphic linear elements have the “touch” of the brush so often used in Chinese painting. There is a fluidity of movement in the gestural mark-making that references the dynamic strokes in the Closed Ward series, but these images have an element of “air” and sense of “growth.”

Pond Edge II is a portrait of Wakeby Lake, near the Mazur family home on Cape Cod. There is an inner glow to this print resultant from layering four copper intaglio plates while leaving some of the paper uninked. The shift in movement as one’s eye navigates the lakescape is guided by a broad spectrum of tonalities and hues. The two intaglio prints from L’Inferno Dante of The Transformation of Agnello de’Brunelleschi encapsulate Mazur’s inventive combination of elements. In XXVii, the patterned “head” resembles the shapes of lilies in Pond Edge II, and the eye is barely visible. In XXViii, the serpent is completely wrapped around the protruding eye of Agnello, a torturous and insightful interpretation. Is this perhaps a layered reference to one’s “inner eye”?

Michael Mazur’s many bodies of work represent series of ideas explored with undeniable passion and persistent experimentation that pushes the limits of creative self. I relate to his lifelong devotion to printmaking—the scraping, carving, scribing, etching, wiping, and, finally, printing—and I am inspired by knowing that each viewing of his work will reveal something yet unseen.

Betsey Garand is a New Hampshire native who was raised on a small, self-sufficient family farm. She received her BFA in printmaking from the University of New Hampshire and an MFA in printmaking from Tyler School of Art of Temple University. Her work is included in numerous public collections, including the Santa Barbara Museum of Art, the California State University at Long Beach Museum of Art, the UCLA Grunwald Center for the Graphic Arts, Arkansas Arts Center, Tokyo Geijutsu Daigaku, and the Art Museum of Estonia. Awards include a grant from the Pollock-Krasner Foundation and fellowships at the Dorland Mountain Arts Colony and the MacDowell Colony. Garand has been a member of the faculty in the Program in Visual Arts at Princeton University, Chautauqua Institution School of Art, and Queens College, City University of New York. She is presently the senior resident artist at Amherst College in the Department of Art and the History of Art.

Michael Mazur (1935-2009) was a painter and printmaker, as well as a dedicated teacher and arts advocate who held positions at esteemed institutions, including the Rhode Island School of Design, Brandeis University, and Harvard University. His artworks have been acquired by numerous museums including the Art Institute of Chicago, the Harvard Art Museums, the Philadelphia Museum of Art, the Whitney Museum of American Art, the Yale University Art Gallery, and the Mead Art Museum at Amherst College. Mazur’s work is represented by Ryan Lee Gallery in New York and by Barbara Krakow in Boston.