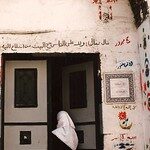 The village had many corners, of which the far western side, leading to the bus terminal, was the bleakest. Om Saber sat on the clean plastic bench installed by the village’s youth committee and waited for the first microbus to take her to the city. With an anxious movement, she reached into her bra to check on the piece of paper she had placed there. Abu Hosny, the old taxi driver, had written down for her all the instructions that she needed to get to her destination: Shatta Prison, where the sweetest part of her now resided, which made distance and time nothing but an illusion. A large cat rubbed its dewy fur on the hem of her black dress. Om Saber smiled and tried to stay still so as not to disturb the cat. She smiled again when she found the paper in its fold.