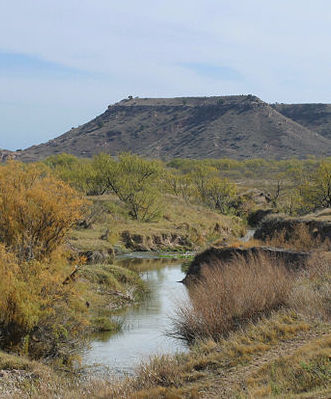 The West Texas winds blew heavy dust that clung to my eyelashes, and a bit of sand got into my eyes. It was a cool day in mid-summer, but Lubbock’s never-ending parking lots gave off residual heat that made me feel like I was baking. Lubbock has too many parking lots. Driving through town, lot after lot passing my window, made me long for the dull-green landscape of the plains only fifteen minutes away. I kept on down Broadway, past the empty lots where houses once stood, past the empty downtown (even though it was only 4:30pm), past the old segregated part of town that always brings out a bone-deep sadness in me, eventually making it past the last highway. I could see the NTS tower in my rearview mirror. Mac Davis’s song was right, I really like seeing Lubbock in my rearview mirror. I could have appreciated it more if it didn’t leave so much dust in my eye.

I reached the last jumbles of corrugated trailer homes, just beyond the little pockets of stucco farmhouses. I was outside of Lubbock city limits. It felt good. I always feel good when I drive. I kept along the road, watching as the sky streaked with hues of purple and lavender. Yellow House Canyon, my destination, lay just beyond the horizon, and the sun now hung a bit lower in the sky.

The Battle of Yellow House Canyon was the last major conflict on the High Plains of Texas between the settlers and the Comanche. The Quahadi Comanche leader, Chief Tu-ukumah (Black Horse), had grown tired of white encroachment. Tu-ukumah rejected the idea of being kept from his home and forced to live sedentarily on an Oklahoma reservation. With his band of Comanche-Apache warriors and their families, Tu-ukumah left the reservation for Texas, willing to fight any who stood in the way of their living a traditional life. Hearing reports of white buffalo hunters being killed, a war party of settlers set out to kill the band. On March 18, 1877, the parties met at Yellow House Canyon where the Comanche band was camped, and a fierce battle ensued. Twenty-one Comanche-Apache were killed by the settlers, ultimately forcing Tu-ukumah and his band to return to Oklahoma. This violence had seeped into the soil around me, and I wanted to cleanse it through ceremony. It seemed right to me to honor these dead, because I was unsure if anyone had.

I kept driving along meandering roads. I liked these roads. I could see the curves of the earth, the road like a black snake. The only snake I’ve ever loved is the road. My air conditioner was broken, and I had my windows down to keep me cool. I listened to the wind whip while I looked out onto the plains- peppered with mesquite trees and knee-high grasses that waved like golden khaki oceans in the wind. The soil turned a deeper red, and I looked at Google Maps to make sure I was still going in the right direction. I could smell the sweetgrass, sage, tobacco, and cedar that lay in my grandmother’s suitcase in the bucket seat next to me. “Medicines,” as my family calls them. I would give these as an offering to the twenty-one dead, burning them to call the good spirits and bless the earth. I’d brought my abalone shell to burn them in.

I turned down a different road every now and again, and I liked slowing down to the empty intersections. It made me feel solitary without feeling lonely. I’d packed my hand drum too, and I could hear the hollow noise of the stick as it swayed when I turned, scraping the stretched hide.

I could see Yellow House Canyon on the map on my phone screen. I don’t know why, but I got nervous as I drew closer. I was worried that I might not give a proper ceremony. I shook the feeling off– I wanted to do this for my relatives. The Indigenous spirits I grew up living next to; their story a part of mine, like family. Long shadows cast by my car cut up the red and orange rays of the setting sun. I slowed my car down. I had arrived. It was beautiful, this land. I wanted to wade in those khaki waves. Dips and hills, with a slight curving canyon wall around what looked like miles of open range. I continued following the road and descended into the canyon, making a slight turn and slowly pressing my brake before being brought to a halt. I turned the engine off and looked over the edge of the cliffside. Bathed in orange-yellow light, those grass-oceans before me beckoned. But before me stood a sign that read, “Private Property; No Trespassing.”

Kabl Wilkerson is Citizen Band Potawatomi, born and raised in Lubbock, Texas in the West Texas Panhandle. Kabl is currently a senior Political Science, History, and Honors Arts & Letters major in the Texas Tech University Honors College, where his on-going research focuses on the nature of Nazism and the built world. He enjoys drinking coffee and driving through the Texas landscape.