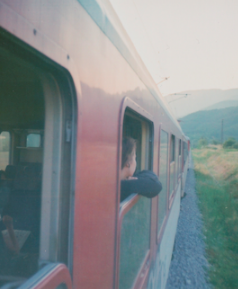 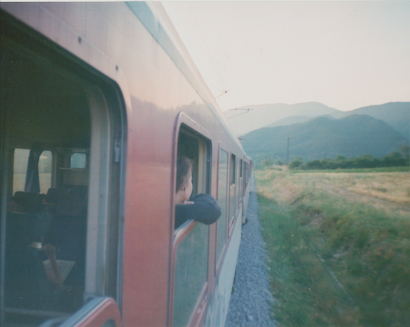 “There’s something doctors won’t acknowledge and won’t treat,” my grandmother says during our afternoon coffee. I’m visiting for the summer. These few months are the longest I’ve been in Bulgaria since my parents and I left for California in the early 90s. My grandmother and I drink our coffee in the living room, where we take our meals as well, facing a wall of cheaply made wooden cabinets, an Eastern European décor trend from the Cold War years. One cupboard has a glass door through which I can see a photograph of my mother from when she was a teenager.

Her eyes are soft. She’s not smiling, but the photo still feels complete.

“Fear,” she says. “Not anxiety or worry—terror.” She tells me about the babichki.

In my grandmother’s village when she was growing up, there were many of these old witches. If a villager experienced something terrifying, they would go to a babichka to layeh korshum, to pour a bullet. I know that the word babichka is an impolite way to refer to a very old woman. The word is an alteration of baba or grandmother. I later learn that the proper word for a folk healer would be znahar. But when my grandmother speaks about these women from her childhood, her eyes look dreamy as she watches her memories become folklore. 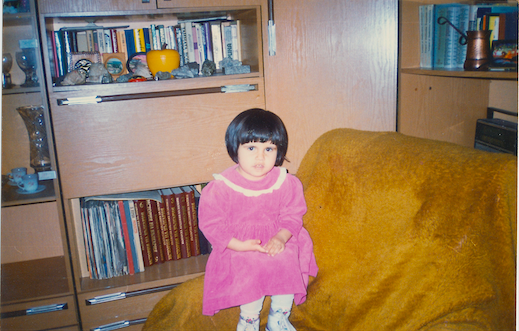 At first I have a hard time understanding my grandmother. She traces the letters “Pb” on the table to denote lead. She traces the fangs of a fire in a fireplace and the long handle of a silver spoon.

A babichka holds the spoon over the fire. On this spoon she places solid lead.

“Lead melts very quickly,” my grandmother says. “It is a liquid almost immediately.”

Once the lead melts, the old woman pours the molten lead into a cup of water.

“Sometimes, if you’re very scared,” my grandmother says, “the lead just forms droplets.” She spreads her hands quickly, mimicking a spray of bullets. The lead can also take the shape of the thing you fear.

With another spoon, the babichka takes the lead out of the water. She prepares the water for you in a bottle. For three days, you sprinkle this water on yourself. You sleep with the leaden shape under your pillow.

“Isn’t it poisonous?” I repeat.

When my grandmother was young, her mother, Saba, noticed electrical wires throwing sparks outside of their house. She was afraid that the house would catch fire. She lost her appetite, couldn’t sleep. Her husband took care of the wires, but her fear didn’t stop until she went to lay a bullet. Then everything was better.

Once, my grandmother didn’t make a bullet in time. She felt a shadow fall across her as she stepped out of the cellar. Over her stood a man with wild hair and a wild beard. She looks away as she tells me the story, clasping her hands to her chest and breathing the way she breathed in that moment. A slow, quiet sigh with wide eyes. The man was hungry and asked her for bread, and she couldn’t remember anything after that, not even if she’d given him bread or not. She thought the fear would go away.

“Now,” she says, “Whenever I walk through a half-lit road at night, I see that man.”

Then it’s my turn for my eyes to widen. “Once,” she looks at me sideways as if afraid I’ll finally scoff at her, “I took you to see a babichka in Karlovo, so that you could make a bullet.” I was only two or three years old.

“We came home from the village with your grandfather. You stood by the mailboxes. You know,” she looks at me over her glasses, “the ones downstairs.”

A neighbor who lived in the building was walking his dog. The dog had a massive body and head. It was not on a leash. The dog charged at me.

“You screamed,” she said. “And your grandfather grabbed the neighbor boy by the collar and growled, ‘If anything had just happened to that child you would already be dead.’” My grandmother grabs my collar and pushes her sweet face up to mine and mimics him.

My bullet was shaped like a four-legged creature. A few years later, in California, a golden retriever bit me. Neither screaming nor crying, I noticed how its teeth had punctured a pretty ruby bracelet on my wrist.

Grandma Saba, my great-grandmother, was one of these healers. She didn’t make bullets, but she did heal headaches. Villagers visited these women for everything from illnesses due to “evil eye” curses—mysterious injuries and sickness—to basic health ailments like colds for which they needed herb-based medicine. Whenever my grandmother came home with a headache, Saba would rub her child’s forehead and bai, telling herself “a secret story” (a spell) to heal my grandmother. 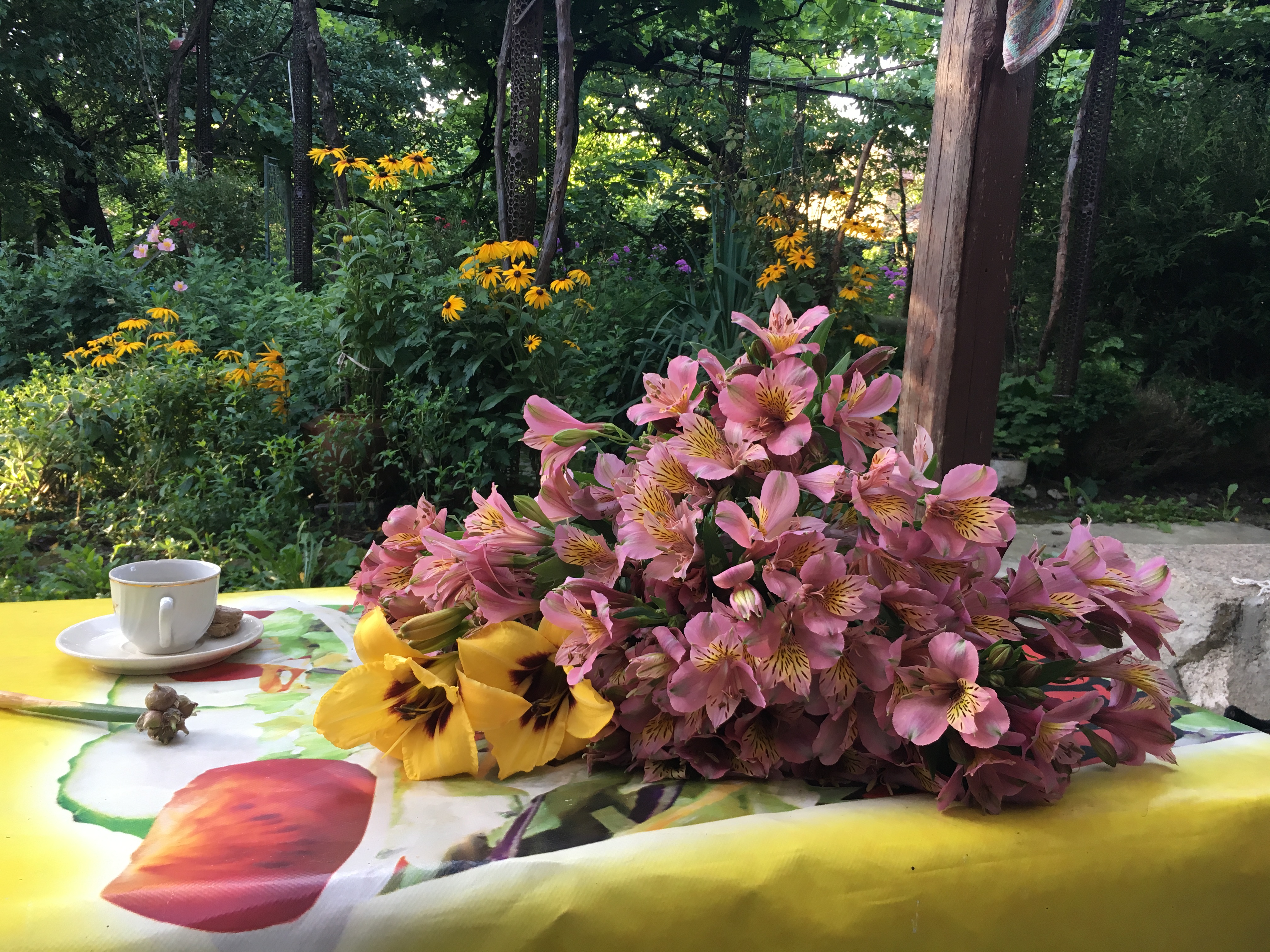 These spells and remedies are handed down every other generation. “Your mother would have received it, but she didn’t even want to hear about it,” my grandmother says. My mother was a Pentecostal Christian until her death by suicide. She had been diagnosed with clinical depression and bipolar disorder. She died six years after we arrived in the U.S. My grandmother’s voice is bitter.

She tells me about another babichka who healed my grandfather’s migraines with a bai and an axe swung around his head. My grandmother asks if I know what a migraine is, and I say yes because my mother, her daughter, got them often after we moved to America. My grandmother looks away and says, “Well, if she had been here, she would have been healed.”

I know my grandmother means this literally. She says my grandfather never had another headache after he went to a village healer. I think about my own Christian upbringing. I think about lead. I wonder if what heals us must always also harm us. Walking back to my room, I realize I live at a crossroads of identity, the product of history on a collision course: regime-sponsored atheism and non-Orthodox Christianity; Bulgaria and America; fear and whatever it is that truly heals us.

Ellie Bozmarova was born in Sofia, Bulgaria. Her work has appeared in phoebe, TIMBER Journal, FlyPaper Magazine, and elsewhere. She holds an MFA in Creative Nonfiction from Goucher College and lives in Oakland, California. Read her work at www.elliebozmarova.com.