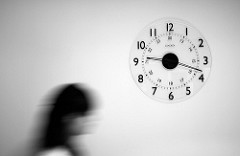 By LAWRENCE RAAB
“Isn’t that just another way to feel compromised?”
Professor Heninger asked. Being freshmen
and mostly women as well, I was sure
we weren’t being invited to disagree.
Then my mind wandered away and when
it came back, Professor Heninger was saying,
“Low expectations are the key to happiness,”
which made sense, however depressing
it was for me, a young person, to take to heart.
Not that I had any evidence that my expectations
should be high, though my parents were paying
a lot of money to believe otherwise.
“What do you see?” our professor hissed.
“What do you feel?” He had no reason
to be angry at me personally, so I decided
this must be part of his performance:
it was time to sound angry, or passionate.
I knew the girl in the second row
he kept addressing his thoughts to, and I figured
she was decoding them in an appropriate way.
“Time means nothing,” he announced, and that
seemed important to him, although I
was of the opinion that time was important.
But for him it must have meant
getting older. And I felt sorry
that he didn’t see that, or didn’t see
that the girl in the second row, who was
in my dorm, knew exactly what was going on.
So much of this makes you think
that bad ideas sound like bad ideas,
which is, if I may say so, an education in itself.
And even if there are less expensive ways
of finding this out, it’s worth keeping
in the back of your mind when anyone starts
lecturing you about time, or the truth,
or what it is you’re supposed to be feeling.

LAWRENCE RAAB is the author of eight collections of poems, including The History of Forgetting, A Cup of Water Turns into a Rose, and Mistaking Each Other for Ghosts, which was longlisted for the National Book Award and named one of the ten Best Poetry Books of 2015 by The New York Times. A collection of his essays, Why Don’t We Say What We Mean?, was published in 2016, and a new collection of poems, The Life Beside This One, will appear in the fall of 2017. He teaches literature and writing at Williams College.