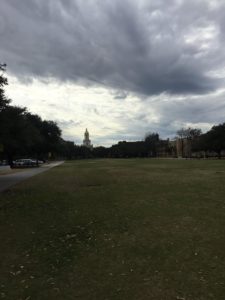 How long have you lived here: Going on three years

Three words to describe the climate: Surface of sun

Best time of year to visit: Winter, or, as it is known here, “winter,” but only if you like rain

Is it cheating to say the sun? The light here is of an intensity I’ve never experienced before; in the summer especially, it boggles the mind, and melts just about everything else. Technically there are two more noticeable physical features: the lake and the Brazos River, which runs through the middle of town, and is spanned by the unexpectedly ornate old bridges that Waco prides itself on.

The largest employer in Waco is Baylor University. I would say there is definitely some “town/gown” animosity floating around, though I think this is more or less natural, given the way the university has rapidly developed, especially recently, while most Wacoans have seen their town suffer, especially economically.

4) Local politics and debates frequently seem to center on. . .

Well, just about everything. Waco is a pretty good staging ground for most controversies within the conservative movement. Some of the experiences I’ve had here politically: passing beneath blown up pictures of aborted fetuses in order to get to work, discussing whether the death of Trayvon Martin was a civil rights matter with a tax collector who doesn’t believe in taxes, watching a female state legislator covertly wear a diaper on the floor of the state senate for her filibuster in protest of the attempted closing of nearly all abortion clinics in the state, reading an article taped to a door at work about the holocaust of African American babies perpetrated by Planned Parenthood, arguing the relative merits of a Kinky Friedman presidential run with anyone willing to talk.

History in Waco is confusing and largely depends on where/how you want to look for it. Waco is sometimes called the “Baptist Vatican” for its record of having the most churches per capita anywhere in the U.S. Religion is a very important part of the history here. On Sundays, if you venture into just about any open space (the YMCA, the public school gyms, vacant storefronts, old bowling alleys, the median underneath the I-35 overpass, the pedestrian walkway over the I-35 overpass), you will stumble into some manner of church meeting. But, as with many developments (fashion, important elements of social progress, gentrification), Waco only progresses in its own reluctant, circular way. Huge, beautiful, intricate churches sit empty while splinter movements find space anywhere they can. Here in the long shadow of David Koresh, one of the most popular restaurants is located just outside of town, in an agrarian compound run by a hermetic religious community. Every November they host a fair, and thousands of people drive out to the site to admire the group’s extremely impressive woodwork, barn raising, and animal husbandry. If you Google the name of this community, your second result will be an exposé from the Texas Observer about the multiple members of the community convicted of sexually assaulting minors; your fourth result will be an article about this same group fromChristianity Today entitled, “Where Community Is No Cliché.” Elsewhere, the “Baylor Bubble” separates Texas’s oldest (highly swank) university from the concentrated swathes that contribute to Waco’s 31% poverty rate, 15th highest in the country among cities of similar size. Just behind the main city park, there is a crumbling mansion district, largely abandoned by developers due to the low income neighborhoods that have subsumed it, even while many thousands watch the HGTV show “Fixer Upper,” where a Wacoan husband and wife team up to redesign middle- to upper-middle-class homes here to spec. This is a town mostly known for, in reverse order of occurrence, 1) the “Waco Shootout Massacre” in which nine men from rival biker gangs were shot to death in the parking lot of a Twin Peaks, maybe 200 yards from a Bed Bath and Beyond, 2) the “Waco Siege” in which 84 people died in a battle between members of a religious cult and the ATF, 3) the 11th deadliest tornado in U.S. History, which killed 114 people, and 4) the “Waco Horror,” which saw, in 1916, 15,000 Wacoans watch as an African American teenager named Jesse Washington was tortured, mutilated, and burned to death, an act not officially condemned by the city until 2006. So I guess history here, and when/where you feel it, kind of depends on who you are. Also, Dr. Pepper was invented in Waco.