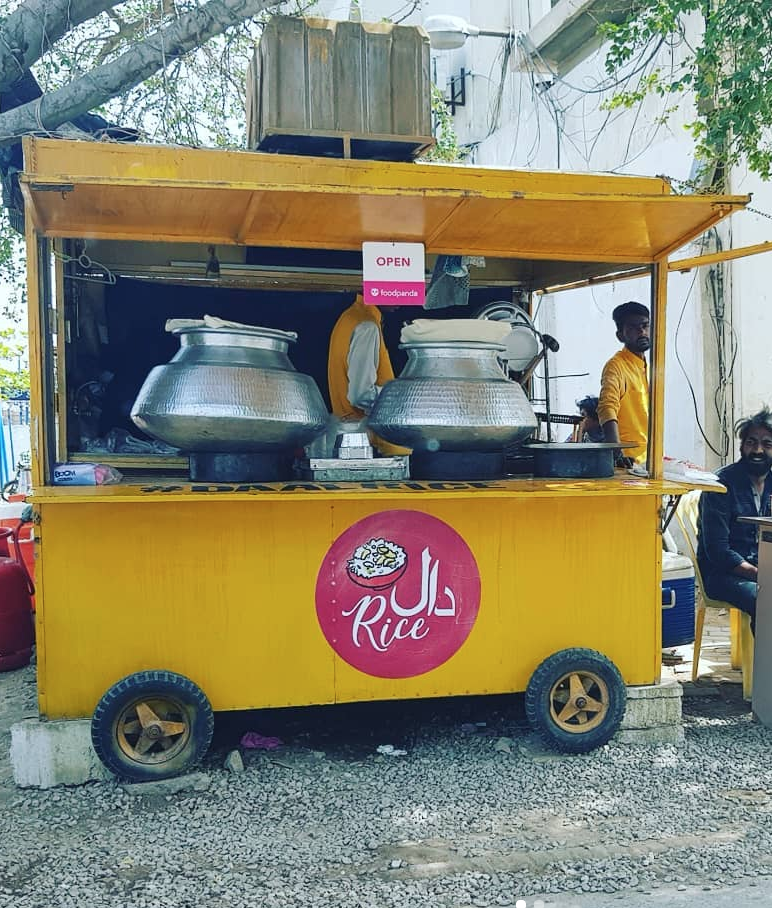 Best time of year to visit? November through March. The weather drops to about 75-80° F and it’s just magnificent.

I’ve heard it said that Karachi is one of the ugliest cities in the world. Its buildings and infrastructure: haphazard, chaotic traffic, peeling paint and overcrowded concrete apartment blocks, broken roads that look like bomb sites, messy construction, garbage and sewage everywhere. The city grows by leaps and bounds; the population seems to double in size every few years. And yet we have unparalleled beauty: the sea and its dramatic, sudden sunsets, bougainvillea growing on every wall, palm trees and neem trees, and then the trees that flower in a blaze of white and yellow, red and pink—plumeria, flame trees, gul mohur and amaltass. On the coast, the mangroves are filled with seabirds, cranes, egrets; sometimes you can see dolphins in the ocean. At night the jasmine known as raat-ki-raani, Queen of the Night, blooms and the air is heavy with its exquisite perfume. The contrasts drive you mad. They also never leave you.

2. The stereotype of the people who live here and what this stereotype misses . . .

People think Karachi is mainly made up of Urdu-speaking people, or refugees, who came to Pakistan during the partition of India in 1947. This isn’t true: there’s immense diversity in Karachi, with Pashtuns from the Northwest, Sindhis who are the native inhabitants of Karachi (made up of dozens and dozens of villages) and who also come from the rural areas of the province. But there are immigrants from everywhere: Chinese-Pakistanis who settled here after the Cultural Revolution in the 1950s, people of Turkish and Central Asian origin, Burmese Rohingya, Bengalis. We have Christians, Parsis, Hindus, and even a few hidden Jews. It’s true, though, that life in Karachi is fast-paced, dynamic and cosmopolitan because of the tremendous mix of people. We’re also probably more business-minded as Karachi is a city of entrepreneurship.

3. Historical context in broad strokes and the moments in which you feel this history . . .

Karachi has changed over the centuries from a sleepy fishing town to a British garrison, and then, from Partition onwards, it was the capital of Pakistan until the government moved to Islamabad in 1967. But every layer of history is embedded in Karachi’s streets, walls, buildings, people. In the morning the fishermen take their boats out onto the sea and cast their nets as they’ve done for centuries. Beautiful colonial-era buildings are everywhere, yellow sandstone bungalows and office buildings which some are desperately trying to preserve as they fall into disrepair and ruin. The modern glass towers and buildings sprang up along I.I. Chundrigar Road, Karachi’s Wall Street, as Pakistan took steps to modernize in the 1970s and become part of the global economy. And everywhere, shacks, huts, shanty-towns and illegal construction as the people on the city’s margins hustle and survive.

4. Common jobs and industries and the effect on the town/city’s personality . . .

The transportation industry in Karachi is probably the one that has most affected the city’s personality. That’s because there is no mass public transit, so people travel in rickshaws, taxis, and privately-owned buses. These buses are almost exclusively owned and managed by Pashtuns, who moved to Karachi from the Northwest and are now one of the largest ethnic groups in the city. They take their plain buses and trucks to “bodymakers” that specialize in creating giant decorative iron frames that fit over the body of the vehicle. Those frames are then decorated with all manner of flowers, curlicues, leaves, painted very bright colors, and adorned with verses of poetry, pithy sayings, and their names. They also paint hoors (beautiful women of Paradise) and buraaqs (the winged horse on which the Prophet Muhammed, peace be upon him, flew to Paradise). Then they drive through the city at breakneck speed, racing with each other, picking up passengers and dumping them in the middle of the road without even slowing down. The conductors hang out the back screaming the names of the bus stops, jump off and load people on, then jump back on again. They’ve caused numerous fatal accidents all over the city, but Karachi would not function without them…

As local politics go everywhere in the world, people talk about how useless the government is at solving their problems. This is particularly true in Karachi, which hasn’t had a properly functioning city government over the last seven years. Hence the crumbling of our infrastructure and non-maintenance of the city, and problems for citizens trying to obtain water, petrol and gas. Electricity is also a problem. This year the government has embarked on a massive anti-encroachment drive, clearing away decades’ worth of slums and settlements from government land, so people are hotly debating whether this is good for the city or whether it tramples on the rights and livelihoods of the already-dispossessed.  Another debate that is a little amusing: the Commissioner of the city decided to put up signboards all over Karachi demarcating the “Downtown,” “Uptown,” and “Old City,” without anyone really knowing what this means. Other signboards have motivational slogans like “Karachi: City of Peace” and “Karachi: An Epitome of Resilience.” People are arguing about why the boards are so badly-designed. I’m upset about the odd grammar, but I guess that’s just me being pedantic.

Bina Shah is a novelist and essayist who lives in Karachi, Pakistan. 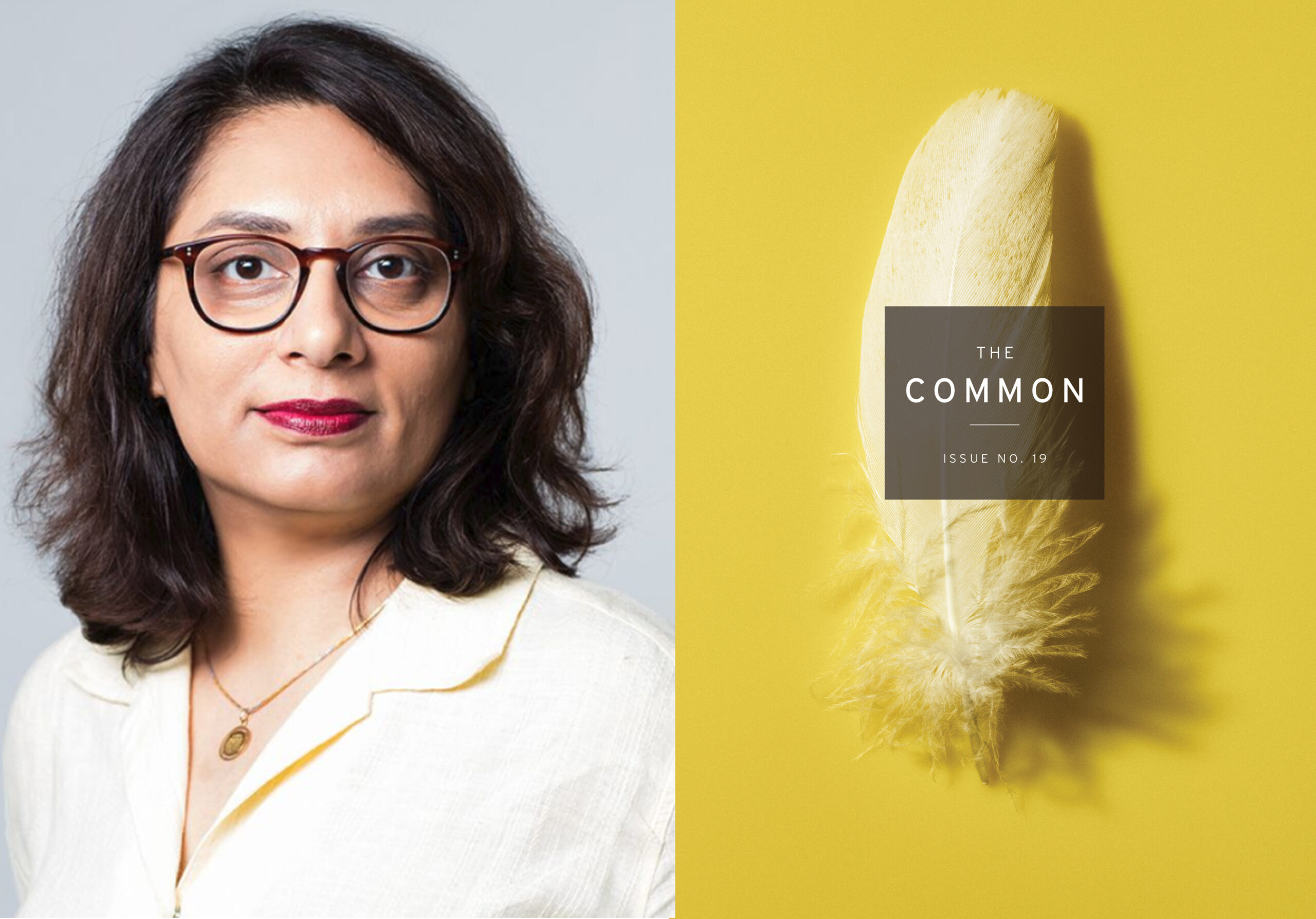 BINA SHAH
Bina Shah speaks to managing editor Emily Everett about her short story “Weeds and Flowers,” which appears in Issue 19 of The Common magazine.