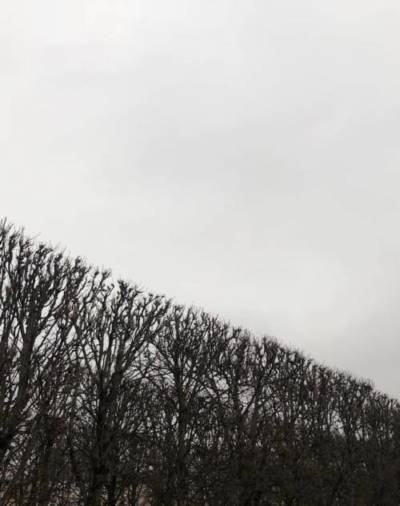 Today the gardens are made of four colors: the white-gray of the sky and the statues, the black of the branches, the green of the grass and chairs and benches, and the tan of the gravel paths.

These should be four distinct colors, yet only the green stands out. The others are just versions of the same color, an ancient neutral, the color of nothing.

Of course, that can happen when walking, too. The pleasantness of time becoming nothing.

There are few people out. The palace, once a home, is a gray trace in a gray landscape.

Not far from the palace, the trees stretch out their branches, reaching for the statues, wanting to touch their stone. But there are also the trees planted in lines along the pathways, and they are different. Their branches are lost in each other and sliced into clean rows, as if they could cut the sky.

The queens’ names are marked on the statues. One looks down at me, reminding me that she is a queen.

I stop to look at a green turtle in the Fontaine de l’Observatoire. He could spit a stream of water from his mouth, but he has been turned off.

Crows perch on the benches. I watch one for a while. He holds a twig or a bone. He tolerates me, just a couple feet away: a city bird, unafraid. But I can’t be interesting to him, just another person who loves his crow-ness, so he flies away.

And there you go, crow. Fine. But why would you want to leave this quiet place? Where will you go from here?

Susan Harlan’s work has appeared in venues including The Guardian US, The Paris Review Daily, Guernica, Roads & Kingdoms, The Morning News, Public Books, Curbed, Nowhere, The Awl, Lit Hub, and Atlas Obscura. Her book Luggage was published with the Bloomsbury series Object Lessons in March 2018, and she teaches English at Wake Forest University.