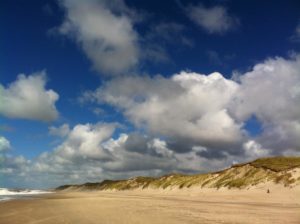 How long have you lived here: A year

People here are said to be reserved and guarded. Farmers! They’re not easy to get close to, people in Copenhagen, our capital, will claim. I was born in this part of Denmark, however, and after living years in Copenhagen, I returned to the west last year. I’ve always thought the prejudice against this place was harsh and wrong. People are NOT like big city folks here (thank God), but they’re kind, their humor is wry and clever, and they are not that reserved. They are strong people, people in touch with nature, and, therefore, survivors.

People have been farmers here for centuries—poor farmers. The soil this close to the North Sea isn’t rich. They have also lived from hunting and fishing, and, all-in-all, made the most of what they could. The village is famous in Denmark because of a poet (and priest) who lived here from 1924–1944. He wrote a lot of critical stuff about the Nazis. So one day in January 1944, the Nazis picked him up at the vicarage, drove him to a forest in the east, and shot him. I think of that every time I drive by the old vicarage. Or pass his grave in the churchyard.

Denmark is such a small country but we still have a lot of dialects. In the 70s, the politicians tried to prevent Jutlandic kids from speaking Jutlandic, so I forgot my dialect, but a lot of people here kept theirs. The interesting thing is that it resembles Scottish quite a bit. It’s said that when fishermen from Aberdeen and this area meet in the North Sea, they understand each other without changing their language. When I’m in Edinburgh, I constantly turn my head to see if it’s someone from back home talking behind me, but of course it’s not. It’s a Scot. The reason for this kind of linguistic magic? Well, Jutlandic Vikings sailed to Scotland during the Viking ages. Burned down villages, raped, slaughtered, made new settlements—and our languages (and gene pools) merged.

5) Local politics and debates frequently seem to center on. . .

There’s a huge cleft between rural Denmark and urban Denmark, and people around here debate that a lot. Communities in the periphery are often neglected, but in Denmark, this neglect is really bad: Jobs are disappearing, people are moving away, houses can’t be sold and are left deserted. But, at the same time, people here have strong belief in the qualities of this place: the beauty of the landscape, the wildness of the sea. As a writer who travels through so many big cities with my work, it’s a blessing returning to this place, its wildness and its silence.