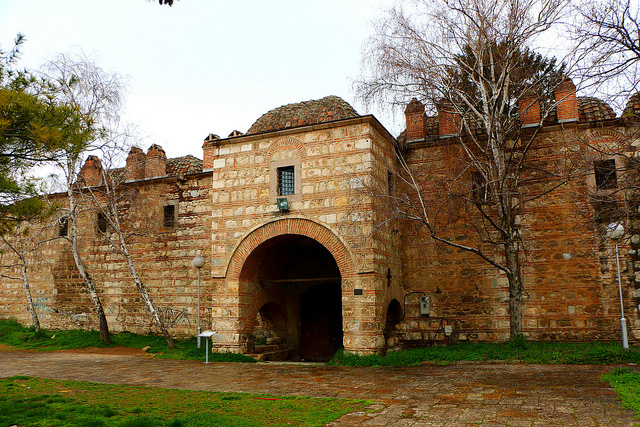 How long have you lived here: Many years

Best time of year to visit? Any time

1) The most striking physical features of this city/town are:

From each point of the city is seen the mountain Vodno, that begins at the southwest part of the city, with the beautiful flora and fauna, a little paradise where citizens can escape when they need nature and beauty. There, in the twelfth century, was built the small but fascinating church, Saint Panteleimon, with a magnificent fresco Pieta, that, according to the British art historian Andrew Graham-Dixon, is one of the first signs of the coming of the Renaissance.

2) The stereotype of the people who live here and what this stereotype misses:

Skopje is a city that changes so much, and so often, that it is reflected in the stereotypes of its citizens too: these stereotypes change so fast that it is not so easy to grasp them. I have my own stereotype: that we forgot the past, that we care so little about the tradition, that sometimes politicians misuse this negative attitude and try to falsify history.

3) Historical context in broad strokes and the moments in which you feel this history:

The remains of the past can still be found: the archeological site Scupi, which was a Roman city founded BC, and with remains of a theatre built in 2nd century AD. Then, century-old churches in the nearby area of the city. The Stone Bridge, built in the Byzanthine period. The Old Bazaar and hammams built in the Ottoman time. The remains of the old train station, that was half preserved and half ruined during the earthquake in 1963.

4) Common jobs and industries and the effect on the city’s personality:

The common jobs do influence the city’s life always, on any continent. Skopje is the capital of Macedonia, and the unemployment rate in Macedonia is almost 30%. It influences the city’s personality a lot, in so many ways that it cannot be explained in an answer but in a book.

Skopje is a mix of Slavic and Oriental culture, as we were part of Ottoman empire for five centuries, and there are so many delicious sweets that remained from that period: baklava, tulumba, lokum, ekler, and my favorites—kadaif and kunefe.

6) Local politics and debates frequently seem to center on:

The project called Skopje 2014, that was organized by the government for building bridges and  making hundreds of monuments (sometimes of historical figures with dark reputations) was set without legal procedures, and it is said that its aim is to erase some parts of the Macedonian history and to “create” new. There are discussions if this is a money laundering project of the government, as it costs by now about one billion dollars (note that by world standards Macedonia is considered a poor country, and in a country with a highly developed economy this amount would be dozens of billions of dollars). The city, just in a few years, was re-mapped, re-modeled, some of the old buildings got new, kitschy facades made of plaster cast, we got triumphal arcs, and the new-built monuments and architectural interventions look grotesque. Most of the parts of the city that I remember since my childhood simply vanished, but they are so vivid in my memory.

Goce Smilevski has written several novels, including Freud’s Sister, translated into over 30 languages, and published in English by Penguin.