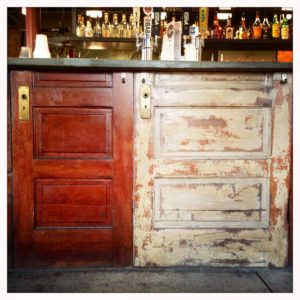 How long have you lived here: August 2015 will mark my two-year anniversary here.

Three words to describe the climate: all four seasons

Best time of year to visit? Ogden is quite majestic all year round, believe it or not. I have a friend who posts daily pictures of his hikes with his border collies along the Bonneville Shoreline Trail (which marks the shoreline of the ancient Lake Bonneville) and under every picture is his tongue-in-cheek caption: “Utah sucks.”

The only months I’d recommend anyone not visit would be during Inversion—during the months of January and February when pollution and the cold, wintry air become trapped under a shroud of warm air. The air in those months makes breathing difficult. It makes for nosebleeds, bronchitis, and brownish horizons. Most days, in fact, I can see the Great Salt Lake from my office on the fourth floor of the English department, but when Inversion lays its ghostly body down, I can’t see anything at all. I can definitely smell the air, though, and it smells like dry dog food in those months.

(Of course, if you’re someone who enjoys winter sports and would like to ski/snowboard “The Greatest Snow On Earth,” you should know that doing so would put you right above all that mucky air. Plummeting downhill on a slick board is still not something I’ve learned to appreciate.)

Hands down: the Wasatch Range. After previously living in Brooklyn for three years and in Houston for five, this immense mountain range is a sight for my city eyes!

I currently live three blocks west of a trail that takes me right up to the Bonneville Shoreline. To the north, I can see Ben Lomond, the peak rumored to be the model for the Paramount Pictures logo. During sunset (because our mountains here, again, are to the east and north), all of Ogden is colored coral from the alpenglow.

Quite famous here is the Utah scone, which is not a scone, but rather a Frisbee of fried dough, served with honey, powdered sugar, butter, and/or berries.

3) Common jobs and industries and the effect on the city’s personality. . .

Our largest employer is the IRS, which might make an outsider think that Ogden is a gray, Kafkaesque sort of place. We are home, however, to great outdoor recreation, agricultural abundance, and the new Ogden Twilight summer concert series. More, we are one of three cities that hosts screenings for the Sundance Film Festival.

4) Historical context in broad strokes and the moments in which you feel this history. . .

Ogden’s downtown leads directly into Union Station, a railway museum and hub that formerly joined the Union Pacific and Central Pacific Railroads. Ogden was, in many ways, a gateway to the West. This junction created quite a boom in 1869 and made our Historic 25th St. a notorious place of brothels and scandals. Believe it or not, Ogden, Utah was once a place for prostitutes, gamblers, and outlaws. Walking downtown now you’d never believe that history, but when you enter Alleged, a rooftop bar located at the center of 25th St., you can see relics from that time. The building was home to Ogden’s famous brothel, Rose Rooms, and the owners repurposed the brothel’s old doors as the bar’s tabletops. Some of the cocktails (made “as strong as the state will allow”) served there are even named after the madams.

5) The stereotype of the people who live here and what this stereotype misses. . .

The stereotypical Utahan is a member of the LDS church, which, because of how they are represented (read: South Park and Big Love) means Mormons are often seen as polygamist, homophobic, cultist missionaries who don’t drink coffee. Not only does this stereotype fail to address the tolerance and diversity within the Mormon population, it also fails to account for the nearly 60% of Utahans who are not Mormon or active in the LDS church, and don’t fall into any stereotype whatsoever. I’ve seen, for example, my fair share of tattoos, skiers, competitive weightlifters, drag shows, rock climbers, head banging, seed swapping, happy hour coffee, and shirtless, addled individuals furiously pedaling undersized bicycles—uphill!—from one side of town to the other.

Janine Joseph is the author of Driving Without a License (Alice James Books, 2016),winner of the 2014 Kundiman Poetry Prize.