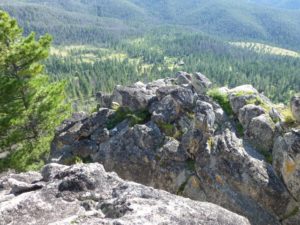 How long have you lived here? I live four miles up a dirt road from Jefferson City, a stage stop that has seen better days, hence the unlikely name Jefferson City. It consists of a post office, a bar that closes and reopens depending on the fortunes of a nearby gold mine, and a hall for the volunteer fire department, wherein we vote. I have lived in this particular canyon for 25 years, and in the shade of these particular mountains, on and off, for 40.

Three words to describe the climate: determined by light

Best time of year to visit: Winter, though I have had only one person do so who didn’t already live in Montana. Winter is when one can really see what living in Montana is like: not the national parks and the summer fields of wildflowers but the silences: the long hours of twilight, the drifting of snow, what deeply below zero feels like, the immense depth the sound of chopping wood falls into. Sometimes, especially after I have visited the cities of the East, I return and feel I live in a foreign country.

Like most places, our roads follow the waterways. Prickly Pear Creek, which drains into the Missouri River 20 or so miles away, runs by my house. Three quarters of the year my window is open to it. Because it comes down from the mountains, it is cold and always quick. The sound is of almost constant arrival, sometimes under ice, lavish in summer when I can hear it all night dislodging stones. Everything gathers to it: willows, sunlight, animals. But perhaps that is my small truth in the larger truth that is the mountains, which is what the state is named for. The mountains mark our horizons. They determine that, once one starts out, every journey will involve climbing. They slow us down. They all have names. They mirror, as writer Robert Pogue Harrison says, our interior folds and thus call forth interiority from us.

2) Common jobs and industries and the effect on the town?

In the years I have lived in Montana I have worked as a baker, a professor, a professional house painter, a roofer, a tree planter, and an aide in an institution. Most people I know accept low wages and the lack of a stable “career” in exchange for the absolute luck of living surrounded by such beauty. Montana is a comparatively poor, mostly rural state. Industries are extractive ones: logging, mining, cattle and sheep ranching, and now oil drilling. Because many of these industries depend on federal regulations and subsidies, there is always blame, rarely praise, being leveled at the federal government. Then, there are all the service jobs that spring up out of the tourist industry. Montana’s scenery and wilderness areas bring millions of people to its parks and national forests each year, land that all Americans own in trust. The difference between environmental concerns and corporate concerns often create tensions, such as recent misplaced efforts to return control of federal lands to the state. Yet I am seeing increasing collaboration and cooperation. Younger people, especially, are seeing that the old binaries—the health of the environment vs. jobs—don’t help.

3) The stereotype of the people who live here and what this stereotype misses. . .

The stereotype is one of reactionary white people: gun rights extremists, survivalists, anti-government vigilantes, and Christian Right antagonists. We certainly have our fair share of those—witness our legislature, which meets, fortunately, only every two years. What the stereotype misses are the American Indian people who live here. Montana has seven Indian reservations: the Flathead (Salish-Kootenai), Northern Cheyenne, Rocky Boys (Cree and Chippewa), Fort Peck (Sioux and Assiniboine), Crow, Fort Belknap (Assiniboine and Gros Ventre), and Blackfeet. The people who live on them, as well as urban Indians in the cities, are a huge political, environmental, and cultural force for the good. Our Superintendent of Schools is the first native woman in the nation to hold a position in high state government. Montana also can boast of an Indian Education for All Program that is a role model for other states, wherein Montana students learn about indigenous history, contemporary affairs, and native rights.

4) Local politics and debates frequently seem to center on. . .

Local politics center on gun rights: who is going to take your guns away. Where you will or won’t be able to carry them: college campuses, grade schools, bars, supermarkets. We share this craziness with the inland west states of Idaho and Wyoming. This year in our legislature, Republicans introduced over a dozen gun rights bills, including one that would allow virtually anyone to carry a concealed gun without a permit and one that would prohibit state and local officials from enforcing any federal gun bans. This position is not really a matter of “debate,” since even calling it “craziness” is cause for a brawl in some places. Politicians’ NRA ratings are in the front lines of any election and, unfortunately, take the place of any kind of measured concern about gun violence.

People have inhabited the plains for thousands of years, some, whom archeologists call Clovis, traveled from Asia and Siberia over the land bridge of the Bering Strait 13,000 years ago, following what is called the Old North Trail through Canada and down into Montana where I live. That trail is still visible in places, dry and fragile and isolated as the prairie is, lodge stones and travois marks sunk deep in the long ago mud. Not far from where I live, in another small town along the freeway called Montana City—really a patchwork of subdivisions spread across the foothills—Clovis points were found. In “The Imaginal Book of Cave Paintings,” which appears in my recent book of essays, Earth Recitals: Essays on Image and Vision, I address this history: “‘To have gathered from the air a live tradition,’ Ezra Pound wrote in hisCantos, yet he was writing in Europe where the traditions were still alive in the languages spoken around him, in the ruins and cathedrals, cities and roads, rather than something caught on the twigs of aspen, buried under the stones of the creek. Uncannily, though, most people who have lived long in the West can testify to an ancient human presence felt in even the most suburbanized areas, especially so in those places which are, to use a word telling in its connotations, undeveloped. It is an apperception of something long absent and yet continuing, a presence murmuring under the surface that we hear in the rustle of cottonwood leaves or the emptiness of the prairie.” It is an apperception of a land ceremonialized, honored, made sacred.

Melissa Kwasny is the author of six books of poetry, including Pictograph, The Nine Senses, Reading Novalis in Montana, and Earth Recitals: Essays on Image and Vision.
She is also the editor of Toward the Open Field: Poets on the Art of Poetry 1800-1950.