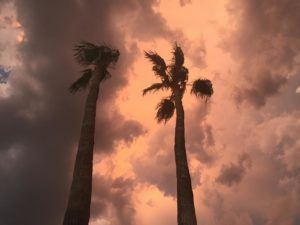 How long have you lived here: One year in Phoenix proper, but in the Valley since 1999 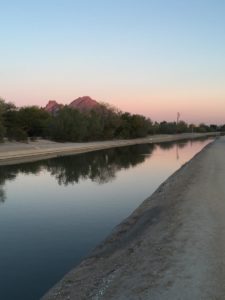 1) The most striking physical features of this city/town are:

Bald exposure: from anywhere, you can get your bearings; also, if the aliens come, there are very few places to hide.

2) Historical context in broad strokes and the moments in which you feel this history:

Phoenix was a frontier town: in the first elections here, in 1871, two of the three candidates for sheriff got into a gunfight over whether or not they had ever agreed to work together no matter who won.… (Sound familiar?) Gus Chenowth went out to the ranch of his opponent—Whispering Jim Favorite!—to dispute Favorite’s claims about their planned cooperation. In the heat of the argument, Favorite fired his double-barreled shotgun at Chenowth, and then, having missed (and presumably not having time to reload), he ran into his own corral, where Chenowth shot and killed him through the fence. There has to be a lesson here, right? Neither man took office.

3) Common jobs and industries and the effect on the town/city’s personality:

Real estate is a big sector, and much language of the commodified “home” infiltrates daily speech. Accent pieces and amenities. Tuscan or contemporary? (that’s an Italianate villa-style, not the misspelling of the city to our south…). Upgrades, on-trend flooring, I live in a ________ community. It can be disconcerting, pride in the actual brand name of a neighborhood. And all while there are so many homeless people here: this is a place where lots of voters would rather keep taxes low and pay for gated neighborhoods; where way too many people have no shelter and endure drastic (sometimes 40-degree) temperature shifts in a 24-hour period… Brutal sun until late afternoon and then the deep chill of the desert at night.

—Also, and while it doesn’t count as a common industry, exactly, there is one public-spirited thing that we do beautifully and well: libraries—all across the region. And everyone uses them. Burton Barr in downtown Phoenix is the crown jewel, but Scottsdale has built gorgeous libraries that are always busy and full (Arabian,Appaloosa…). It’s a huge civic loveliness to see and spend time in them. (And they all still have books….)

We are a hybrid of so many places, and we are pretty stratified, but Phoenix differs from much of the rest of the Valley in that there are a good (and growing) number of independent restaurants and businesses. You can go somewhere one-of-a kind: to Lux on Central or Ingo’s or White Cup or First Draft Book Bar or Flower Street Urban Gardens or or or…. The whole region is probably more welcoming of independent businesses than when I moved here in the late 90s, and in the kind of sprawl that we definitely do occupy, it’s exciting to see so many originals thrive. The newest coffee shop near where I live is Sip, a converted Jiffy Lube-ish establishment (the drive through is in an old auto bay): they have all the meals, live music, seating inside and outside…. It’s clever and cool and feels very Phoenixy (the light rail is expanding, but we are still a city of cars, even if, apparently, we are one lube shop fewer than we used to need to be—)

5) The stereotype of the people who live here and what this stereotype misses:

We have a lot of stereotypes! Cowboys and Snowbirds, political conservatism in the libertarian strain; a lot of elective plastic surgery. There’s the sheriff who puts prisoners in pink underwear in order to embarrass them, and the way reelecting him year after year lets the whole country know my county supports policing by stereotype…. The sheriff’s famous posse: the New West as an old Western, open carry and those Gun Club Christmas cards where whole families pose with rifles in their arms… Plus golf courses and swimming pools in the haboob-prone droughty desert: we look like people who could care less about the climate and the reservoir.

What these stereotypes miss: We kind of like strong women, whether they are Supreme Court Justices, finger-shakers at the president (seriously, we’ve had a lot of women governors….), philanthropists, entrepreneurs, etc. Also, there are a lot of people here working hard to make Phoenix sustainable, with water policy, architecture, urban planning, even agriculture. We rank 40th out of the 100 largest US cities for overallcommitment to environmental sustainability, which is pretty high given who and where we are: 1.5 million people in a landscape of cacti andeight inches of rain per year. 2015 marked the 30th anniversary of the first Central Arizona Project water delivery, and the 35th of Arizona’s groundwater management act. (California began to regulate groundwater only in 2014.) So, we are on it, and it’s part of the zeitgeist, to think strategically about the future. ASU, where I teach, has a Futurist-in-Residence and in fact a new academic unit called the School for the Future of Innovation in Society, whose mission is to focus on “the set of plausible futures that humanity has… planning now for the kinds of futures that we will want to inhabit.” You can major in that. In so many ways, across so many areas, Phoenix itself asks the question, “Should Phoenix Exist?” In public! With real concern. I like living in a city where I know so many people are working toward a safe, livable, valuable future, with water, and hummingbirds, and bright orange flowers on the prickly pears.

Sally Ball is the author of two collections of poems, Wreck Me and Annus Mirabilis; she teaches at Arizona State University.