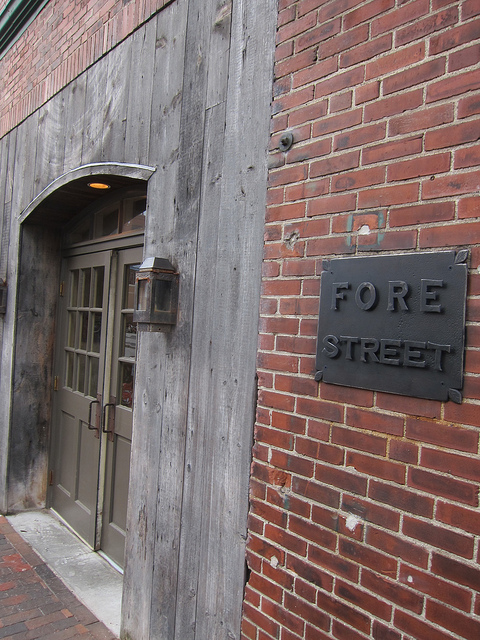 Portland was vibrant, despite its mistiness; always threatening to rain, but never truly downpouring. G. and I walked up and down Fore Street, looking for the restaurant by the same name, trying not to look too much like lost tourists. We had escaped to Portland in search of good food, which was always a comfort to us and which we needed now more than ever. Finishing our undergraduate degrees a few weeks earlier had left us feeling more somber and empty than excited. After days of enduring many heartfelt goodbyes from friends we knew we’d never see again and lengthy advice from proud, overbearing relatives, we were aching to get away from it all; to distract ourselves from the constant reminders that a chapter in our lives was closing forever.

The search for Fore Street was a welcome distraction. But now we really were lost. A half hour went by before someone finally told us we had passed it several times already. A metal sign reading Fore Street (which we had mistaken as a street sign) hung plainly on the facade of an old brick building, next to two austere, gray doors. Surprised by the understated entrance, we pulled open the heavy doors and found ourselves in a tiny foyer, where an elderly couple—very clearly tourists—were sitting on a bench with their necks craned, silently reading a menu hanging on the wall behind them. We sped past them, through another set of doors, and found ourselves in the main hall of the restaurant, low-lit, with a sleek, granite bar curving round to our left, its stools still stacked on the counter, and a stern-looking hostess with a phone pressed to her ear, informing yet another caller that there were simply no reservations available for tonight. She promptly hung up and informed us that they would start taking names for walk-ins when the bar opened up at 5. That was an hour away. She warned us that a line had already started and pointed to the couple we had just passed.

We turned back to the foyer and sat down on a bench opposite the couple, who were now staring quietly at the floor. They did not look up. Feeling a wave of awkwardness overcome us, G. and I pulled out the tourist map we had picked up earlier and feigned interest in its cartoon-like renderings of Portland. G. pointed to Fore Street on the map, mumbling that we were only a block away from the shore.

I folded the map and slipped it back into my bag, G. panicking slightly and reaching for his phone before I gently stopped him. “Is this your first time in Portland?” I asked.

They looked up at us. The woman confirmed that it was. And they were only here for a day. “We’re on a cruise going up the East Coast. We leave tomorrow morning, but the hotel said we had to try this place first.” She spoke in a confident, Southern accent, a warm smile breaking out as I confessed that we were really only here for the food. The man laughed and nodded. Their names were Jim and Caroline, they said. They owned a ranch in Texas, and had many grandchildren, whom they missed dearly. They began talking about how long they had lived there, how many cattle they raised. Then they began asking us voraciously about our own lives—where had we grown up? What did we study? Where did we want to go?

After a while, an enormous crowd had formed behind us, the line stretching down the street and around a corner. But we hardly noticed. Jim and Caroline told us about all the places they had been. The food they had tasted. The four children they’d watched grow up on their ranch. The tiredness I had sensed before dissolved as they excitedly recounted their lives to us, sharing stories about their everyday adventures, as if remembering them for the first time in years; as if just now realizing how happy their lives were, how lucky they were to have had things happen the way they did. They had been married for 40 years, they said. G. wrapped his hand around mine. Suddenly our four years together seemed so short.

Finally, the hostess came through the doors to announce that the bar was open. Jim insisted that she take our names down first, even though we had arrived after them. It would be a few minutes before they would seat us, the hostess explained. “Shall we check out the bar then?” Caroline said, and winked at me. I smiled as she took my arm and ushered me inside.

A couple drinks later, the hostess finally called our names. G. and I shook Jim and Caroline’s hands and wished them safe travels as they continued their cruise. Then we disappeared through the crowd and were led to a small table for two in a back room—the “walk-ins” room, we guessed. Yet it was surprisingly lovely, flooded with natural light that blinded us briefly as we entered from the dim lighting of the bar. Windows covered two of its walls almost completely, and a seagull darted past, reminding us of how close we were to the ocean. We could see clouds beginning to collect near the shore, bringing evening sooner than anticipated.

As soon as the waitress took our orders, we fell silent. G. looked concernedly at the table, his brows furrowed. “I’m going to miss them,” he said after a minute. It sounded strange to admit such a thing about people we had just met, but I nodded slowly. I stuffed a bread roll into my mouth, trying to figure out why I would miss them so much, too.

The meal was spectacular—an enormous step up from the repetitive dining hall food we’d been eating for years—but it brought none of the comfort we had expected until, in fact, we had finished it, and Caroline suddenly appeared, scuttling up to our table as we were receiving the check. “I just wanted to say how lovely it was to meet you two,” she said. I was shocked to see tears forming in her eyes. I clumsily stood up to shake her hand again, but no sooner had I risen from my seat than she pulled me into a hug for what felt like a long while, as if we had known each other all our lives. And then they were gone.

We felt an odd sensation of appreciation and loss come over us. As we left Fore Street, the evening smelled of rain and sea salt, and we wandered onto the docks, where another boat was coming in to shore.

Diana Babineau is the Managing Editor for The Common.