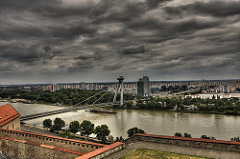 So I’m still alive and now I’m in Bratislava.
That’s funny. I hadn’t expected to be alive.

A sign in italics nudges us at the station:
Have an amazing time in Bratislava!

That’s funny: a straight-faced wish, offered in English
and then Slovakian, posted above the trash can

that stands like the only monument in town.
We’ve heard there’s a castle, though. We need a tram.

We take one, and it heads in the wrong direction.
A pretty girl, cheerful and blonde, straightens us out,

and we get on and off a bus at the proper stops.
That’s funny. Already a right place and a wrong one

to be in Bratislava, and I am among
the people who sort of get this, at least at the moment

I happen to occupy, within a vacation
in Vienna with a day trip to Bratislava.

That’s funny. I had thought my travel companion
through life would be my husband, even if

I’d gone to Bratislava, which I hadn’t thought of
long enough to think I would or wouldn’t.

The spanking white castle, standing high on a hill
we climb on foot, swigging our bottles of Coke,

dates to the year 800 or so, but burned
down to the ground, which tends, as we know, to happen,

and was reconceived in one of the worst times of all,
the 1950’s, under Soviet rule.

That’s funny. Atop embarrassing pillars, knights
in plaster armor gaze up at the sky

triumphantly, although what for is forgotten,
and the sunlight they eclipse in silhouette

is all the sillier on those phallic cannons
between their legs, with three or four cannon balls.

More cannon balls per man. That’s human history
in a nutshell. Bullies unsated with all they’ve got

and below, the blindsided masses. That’s what it is.
And yet I’m happy, now, with my companion—

he likes me, I like him. He has his own back story
of bleak encampments, battles lost, and sorrows

best not spoken of in Bratislava
lest we spoil our day, which so far is duly amazing.

I admire his dignity. Dignity is funny.
Everything’s funny now, which we hadn’t expected

to happen, either of us, after what happened.
We’re still alive and now we’re in Bratislava.
Mary Jo Salter’s eighth book of poems, The Surveyors, will be published by Knopf in 2017.  She is Krieger-Eisenhower Professor in The Writing Seminars at Johns Hopkins University, and lives in Baltimore.