Speaking of Southern Illinois and fishing and smoking cigars and praying when you don’t believe in anything, I got a call last week from my neighbor Larry who was having a porn barbecue. “Every year is a gift,” he told me, when he turned thirty-four. That was forty years ago. He was always convinced he’d die young, or die middle-aged, or die a few weeks after he retired. He’d more or less been planning on it forever. In the past five years he’d sold his books. He’d sold his collection of toy figures. He’d burned most of his poems. “Nothing I can do about the published ones,” he’d said. “That’s my own little punishment from God.”

I was happy to see that religion hadn’t cleaned up his shaggy face. His nervous, ashen hypoallergenic Labradoodle watched us move around the first floor from his oversized kennel at the front door. Larry put it there because no one ever came to visit him. “Who’d want to knock on death’s door and get high with me?” he said. “My lungs are shot anyway. I have to boil the leaves and make tea out of it.”

Larry wasn’t sure he could make the trip upstairs more than once a day. “Ankles, you know.” It was a reference to the night he broke one of them tripping over the concrete lawn Buddha when we’d gone out to let the booze settle. Now he had thrown almost everything out—all of his notebooks, and his many letters from Snodgrass. There had been a few secrets between those old friends, not to mention stories about Cal. “I hate so much what I’ve written,” he said. “I loved it once but now I see it for what it truly is: sad and bitter and disgusting with self-absorption.” He asked me if I’d heard the news about his mouth cancer. I had. The lump was benign. “God-damned CAT scan.”

I first wrote Larry’s obituary in 1976, updating it every five years or so. “Anything to add?” I said. “A new chapbook?” 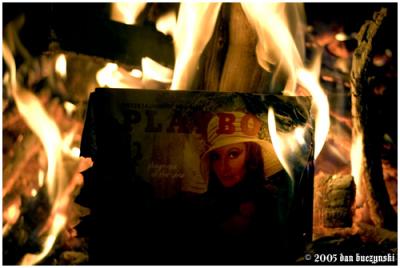 “Before we look at these photographs let me show you my drawings,” Larry said. He worked in crayon, and after he’d colored a scene—the Garden of Eden, or fishing, or an Illinois camp cabin he remembered—he Xeroxed the drawings to pass them out at church. Years ago he’d been known as Mr. Electric for the psychedelic palette in his poems, and the Italian acid that he dropped to smirk up the way he saw things. He got treatment and was clean but now had to have weed again for the ankles, or the back, or the bad shoulder. The crayon colors were like the words he used to sweat over, the ones he’d thrown out because they made him feel not ready to die.

Although he didn’t suffer from any one, fatal, thing, Larry felt sure that his death was imminent. It would probably happen in his sleep because he slept about seventeen hours a day, dulled by painkillers and slack circulation. So positive he was about dying that Larry was sorriest about not outliving his mother. She was ninety-eight. Still living in the same home in the same small Illinois town where a dark-haired woman had once taken Larry aside and said, Hey cowboy, show me your horse.  “This happened before I’d mastered figurative language. It’s a problem I still have. If I didn’t live it I can’t write about it. It’s because I have no imagination.” That night Larry drove her to his uncle’s farm and they climbed over a fence and sallied across the clover to see his horse. “I wrote three poems about her, and if the bus ride east had been thirty-seven hours instead of twenty-seven I’d have written five. That was a blaze to remember.”

We were thumbing the bare-breasted stacks. Occasionally I’d pause, and Larry would be hopeful. He wanted to know if there was anything I wanted to take before he burned it all. It was that feeling of knowing something in your life mattered and was worth passing along to someone. That someone else wanted it. Or maybe it was the irony of a confessional poet who gave part of his heart away in every stanza until the big rock in his chest was just the size of a pea. Burn piles were all he had left to give, and he regretted not asking me over before he got rid of the toy figures. “Some of those,” he said. “First generation plastic. The good kind.”

There were a few pinups which caught my eye. I asked him if he had any Betty Page. “I have a copy of her first job application,” he said. “She was trying to be a school teacher in Dade County. It’s here somewhere, mixed in.” We found it while we were boxing up the stash. I wondered if she arched her back and looked over her rounded shoulder when teaching the times tables. The job application was old, and back from when they asked you where you were born and what color your parents were. “Not the worst thing to come out of Tennessee,” I said.

Larry had a hibachi set up in his backyard. The near constant burning kept it from rusting. He threw a match. He said, “If that grill could write, what pathetic little horrors it would conjure.”