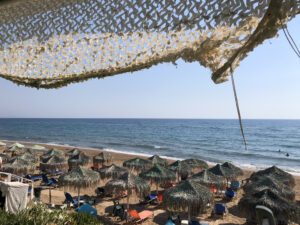 1. This is the story

of cigarette butts and discarded straws.
Of beach, and sea, and all that mythology
rolled into one bright ball where my child plays

among lounge chairs, voices, thatch umbrellas.
Wave after wave of clustered consonants
and open vowels swell and crest over us—

chords of her father’s mother-tongue, and hers.
So many syllables to name this smooth
crescent of coast. So many words for blue. 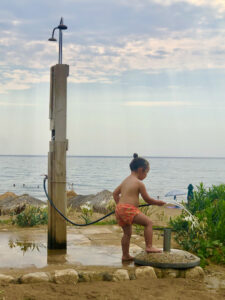 where I can touch the shadow of my hand
on the sand of the sea floor, and tilt my face
to find the day moon half-cupped in shade, in sky

fluid as sea. Sea of sunken epics.
Sea of fraught songs. Sea whose depths we question,
whose surface disassembles reflection.

Sea village, mountain village, one thin road
between them threading olive groves and up
to stone-clotted pastures the goat herds roam. 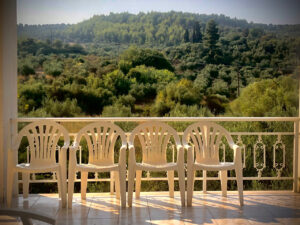 dangles and spins in its plastic hammock.
The afternoon unwinds. Shall we gather
wind-scattered trash at dusk to the music

of cicadas? Can we accept the gifts
of puzzlement? Months later, in the grips
of busy-ness, ask where the summer went. 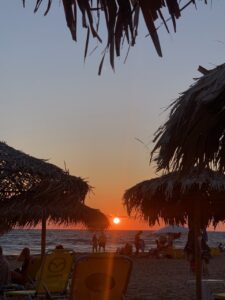 Poet and recovering engineer Lisa Rosenberg is the author of A Different Physics (Red Mountain Press). The recipient of a Djerassi Residency and Wallace Stegner Fellowship, she served as Poet Laureate of San Mateo County, California, and is a frequent speaker on the confluence of arts and sciences. Her poems and essays appear in venues such as POETRY, The Threepenny Review, Amsterdam Quarterly, Ruminate, and California Fire & Water: A Climate Crisis Anthology.