I was raised Up South in the 1960s, and I heard grown folk talk about “country” as one of the worst things you could be:

Why you gotta act so country?
Girl, that is some sho ‘nuff Geechee backwoods mess.
Look at her country ass, thinking she cute in that mammy-made dress! 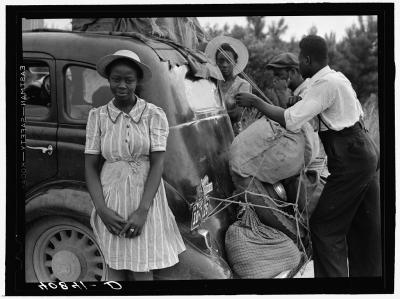 So it is with great ambivalence that I watch black people now embracing rural and agricultural experience. Young horticulturists, middle-aged backyard gardeners, even the student interns in my office tell me how much they love southern farm land. They confide to me their wishes to return to it, to sink their hands into it. They whisper dreams of a rural existence populated with wise ancestors and recovered history. They long for the more “authentic” values they think it will bring.

I want to suck my teeth and say I am having none of it. My people worked hard to leave country behind, shedding swept dirt yards and accents thick as Alaga syrup. Me, I honor their struggle.

This cynical voice is my own learned contempt for the places my grandparents escaped. They fled southern country, and made sure their passage was marked “Door of No Return” for my parents. Their memory of country was of dirt poor, dirt floor, worm-infected children and the low down dirty truth of Jim Crow. To them, country meant making do and never having enough. Country meant it didn’t matter that you lived on a washed out dirt track road, because nobody was ever going to come.  Country, where the Good Book was the only book most folk would ever own, King James’ Version memorized verse by verse on Sundays and recited on every possible occasion if it had been read. Country meant finally arriving in the city in your best suit and Sunday manners only to be laughed at as fifteen years out of date and shamefully shiny, with Vaselined legs and hair plastered in place with Dixie Peach. Where I grew up, to call somebody country signified the speaker’s grateful escape from brutal and hungry and hard, everything limited, unworldly, and necessarily made by hand.

To be sure, there is some part of me that is grateful for the restoration of Southern country memory: naming the eye of Guinée stitched by hand into Gee’s Bend quilts, and the bodies of Senegambia shouting Knee Bone Bend in a ring in the Georgia swamps. I am thankful for the small joys country has preserved in my lineage: cousins with ancestral names like Gizzy and Mariah; these two hands that can still put up my great-grandmother’s chowchow relish; the memory of my mama laughing, teaching these same flying hands and skinny-girl legs how to pat juba — hammin’ in the hambone, hammin’ in the shoulder, Misty take a pretty gal and show you how to hold her...

But I never forget that I am descended from narrow escapes and lonesome places of defeat, places with names like Warrior Creek Stand and Lookout Mountain. I come from country bodies marked with burns from falling woodstove pipes, half-blind from sewing in the light of coal oil lamps. I take after my grandmother Gussie, who had a compact OED on the lectern in her parlor in the space where most Kentucky-born folk would have had a Bible. I think of her when I listen to friends who want country to mean embodied virtue, like milk straight from the cow. I say a prayer for the ghosts of dead waterhead babies every time I pour myself a glass of pasteurized milk. Listeriosis, my grandmother’s dictionary replies.

I am descended from people who made narrow escapes. I once asked an elder in Wilcox County, Alabama, what it took for a man to get out of a small town in the Black Belt back in 1920, the way my grandfather did.

She smoothed her last hairs up toward the pinned-on bun that trembled on the crown of her palsied head.

Well, child, time were hard back then. They didn’t have all kinds of things like we do today. You’d have put on your good suit, cuz you was going to take the train when you got there. But your shoes, you would take your shoe and tie a knot in them. Tie a knot in the laces, so you could wear ‘em round your neck, you wouldn’t want to mess up your good shoes walking.And you would walk up toward the train and maybe somebody would be going your way. There might be somebody come along with a cart and mule going that way.

Pecans rained down on the corrugated roof where we sat. It was fourteen miles from the town where my grandfather was born to the nearest whistlestop for the north-bound train.

We didn’t have no trucks and tractors and things like that back then. But maybe somebody going that way would see you and maybe give you a ride.

When I go digging in my history for a relationship to rural land, I turn up this spade-full of inconvenient memories. Country life has surely changed for black folks in the fifty years since I was born; still, I am grateful for the freedom to read and to write and to tell you this story. I am narrowly escaped from growing up country, I have no longings for a black pastoral romance. And I do not apologize.

Mistinguette Smith is a poet, playwright and director of The Black/Land Project, a national organization that uses narratives to understand the nature of race, land and place.

“Group of Florida Migrants.” Photo by Jack Delano, provided by Library of Congress.