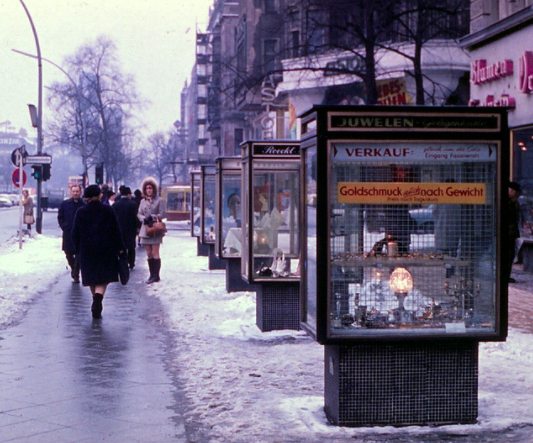 There’s a big church conference in West Berlin and the streets are amazingly crowded, but many shops are closed. It’s the perfect day, we decide, to visit East Berlin, the land of Godless communism, as my husband Bob calls it. We hope to find bookstores selling cheap editions of classic books (Marx, Goethe). Also, because we are traveling on a tight budget, as always, we hope for some inexpensive but substantial meals. The Wall has been down for about seven months, but East and West are not yet unified, and they still have separate currencies.

“Let’s not bother with breakfast,” I say, though we are both hungry. “Everything will cost less on the other side and the lines will get longer the later we go.”

We set off a little light-headed. Bob’s passport pouch, which he wears tucked under his shirt, is stuffed with East German marks purchased the day before on the street outside the Zoo Station, one of the busiest squares in West Berlin. Currency hawkers stand at six-foot intervals along the sidewalks there, offering three Ostmarks for one (West German) deutsche Mark.

In East Berlin, the exchange rate is one to one. East Germany’s money is worthless outside the country, and it is illegal to bring it into East Berlin as we are doing, but currency unification is less than three weeks away. We hesitate to buy currency on the street, but our West Berlin friends assure us that we would be silly to pass up the favorable exchange.

“Should I hide the money in my shoe?” Bob asks.

“Don’t bother!” our friends advise. “No one cares anymore.”

We get off the S-Bahn at Friedrichstrasse and join the line to cross into the East. Most people are carrying boxes or pulling carts filled with the goods unavailable on the other side of the Wall before November 1989—television sets, kitchen appliances, boom boxes. They are Ossis who have crossed over to shop, or Wessis taking gifts to friends or relatives they have not seen in decades.

The line moves quickly. If anything, the Volkspolizei seem bored. They hardly glance at the passports. Sometimes one surveys the boxes in a heavily laden cart, but most people are waved through with little delay. I wonder how close the nearest breakfast spot is and what we will be able to get. I love German breakfasts of dark rye bread with sweet butter, tart jam, and thinly sliced sharp cheese. Bob speculates about the multi-volume sets of books he’ll be able to pick up.

Finally, we are at the front of the line. I show my passport. Bob, behind me, takes his from his pouch. Suddenly a police officer pulls him out of line. Confused, I step out of line as well, but Bob has already been taken to an area eight or ten feet away. When I try to join him, another officer stops me. I can’t hear what the VoPo is saying to Bob in the noisy tunnel, and then the officer takes him behind a curtain.

Enough time passes for me to think about the fact that we have entered a country that is technically a totalitarian dictatorship, despite the rapidly shifting political situation. Full unification is still four months away. Behind me, people flip open passports and continue into East Berlin. No one seems to notice the American woman surrounded by a cluster of East German police. I wonder what is behind the curtain. Are there doors and hallways that lead to other rooms—or cells?

I speak German, but in my fright I can form only the simplest of sentences. “Wo ist mein Mann?” I ask one of the uniformed men again and again, but he does not answer. I wonder whether it is better to wait or go back to West Berlin to find the American Consulate.

After what seems like twenty minutes, but is probably only about ten, Bob emerges from behind the curtain, along with his keeper. Bob looks chastened. His Ostmarks—worth about $50—have been confiscated, and he has signed a confession admitting his guilt.

We exit the Friedrichstrasse station, feeling out of step with the bustle around us. Above ground, we find ourselves in a broad gray square, nearly empty of traffic, but ringed by huge cafes. I still have some East German money tucked away, and we eagerly enter the closest restaurant. Here we find another line—this time for a table. This line moves more slowly than the border control. When we are finally seated, we order what is breakfast for us, though it is lunchtime for everyone else. The food is unappetizing. Canned fruit, processed cheese, cheap bread. When the Rechnung comes, I try to pay with what we thought was still the local currency, but the server waves it away and says they accept only deutsche Marks.

After breakfast, we go out to look for bookstores, but every shop we find is closed due to the same church event being held in the West! “So much for state atheism,” Bob mutters. Our trip behind the rapidly crumbling Iron Curtain is more edifying than we expected. We’ve lost our money, our dreams of food and books have been shattered, and our foray into the black market has been smartly smashed by the remains of the police state. The only people profiting from this historic transition are the money hawkers outside Zoo Station who convince tourists like us to hand over solid deutsche Marks for worthless Ostmarks nobody wants anymore.