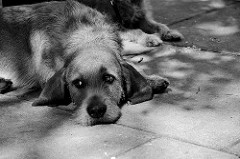 I walk along the sidewalk, my little dog tugging at her leash. The snow has begun to melt; water gathers in puddles and darkens the leather of my boots. The sun breaks over the roofs of houses across the street and the wet tree branches gleam. A sun too hot for January, but beautiful. The neighborhood is quiet and empty. I sniff the air.

You sip your coffee in a coffee shop three hundred and eighty-eight miles away.

Last night, I dreamt we were dogs—

A sun too hot for January, but beautiful. The damp warmth of the early thaw crackled in the dead leaves, and the earth turned to mud beneath my paws.

You were there, beside me. Nosing under the old snow. Your face like mine but sweeter, with less white around the eyes. Our mother’s eyes.

We circled the churchyard, cataloguing the trees in all their variety. Tart, ambrosial, sweet. We sniffed at the roots of a great oak, dead with a hollow trunk. Other creatures had come and gone; we could smell their ghosts in a curve of brush, leaves pressed by the weight of a small body. We searched for them.

We moved alongside each other, then separated; our tracks crossed and diverged, like rivers from the same ocean. We were each a reflection of the other, a likeness glimpsed in a wavering pool.

A train rushed past two blocks away; clipped images between the houses. Rust, diesel, metal. We listened until it became wind.

A woman’s voice called to us from a porch. The sounds were like an old song, familiar but also not. They had no scent; they were pennies tossed into a pond. We ran after them, forgetting everything: the fruit trees, the snow, the train.

The house smelled like home, like apples and bars of soap. We lay on the kitchen floor in patches of sunlight. Our soft, furred bellies heaved with the rhythm of collective sleep. We dreamed. I woke and you were there, beside me.

Kelsey Leach is a writer based in Salem, MA. She received her MFA from Chatham University in Pittsburgh, where she was the recipient of the Margaret Lehr Whitford Fellowship from 2015-2016. Her creative work has recently appeared in aptliterary magazine. When she isn’t writing, she waits tables, practices yoga, makes bagels, and takes long walks in the park.