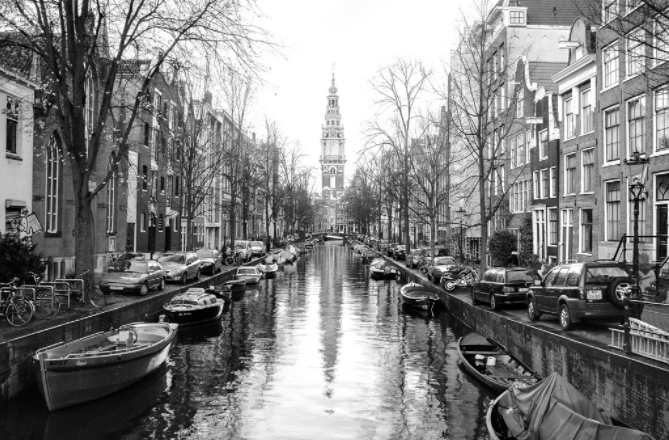 My 39th birthday was spent in the airport, but walking down Herengracht I thought, “Happy Birthday.” Not too excited being here. Looks like just another New York City to me. Of course, it’s dark. We’ll see what daylight brings.

Daylight brought gray sky and Graziella. Graziella said that a famous Italian or French writer said: “Sometimes the sky is so close that we have to forgive it.” She said a French poet once wrote: “The sun was as blue as an orange.” And she told a joke: “Two fish in a bowl. One says, It’s Wednesday.”

Seeing Amsterdam as cold, dreary, smoggy, wet and unbeautiful. The smog alone says no. And so I fly tomorrow to the Land of Fire. For 526 guilders, the flight attendants, or at least the food, had better be special.

It’s not that it’s not freezing cold with gale-force winds. It’s that, even colder than Hell’s anti-matter gate, Ireland beats all. Individuals are awake, alive, forthcoming and reasonably – I would even say considerably – happy. There is a sense of calm here, as if things are as they should be. It’s not about the land, the green green grass, or the sea, though these are beautiful. It is the invisible structure of cultural values that makes me feel I can call Ireland home.

If you see “The Matchmaker,” you’ll get a glimpse of the Aran Islands. I’m going to plant a tree there, behind a hillock of piled stones. Saw three Romanian gypsy children on the famous Grafton St. about to play their gypsy music. I went over immediately and they crowded around me and I asked them about their lives. They spoke little English, so I asked in French when they had come to Ireland. “Tomorrow.”  “You came to Ireland tomorrow?” They were wonderful. Doing research on gypsies for the second act of The Eden Game. Lots of gypsies here in Ireland.

The land of the Irish was a tad too wet, cold, and windy for me. In a word, the song in my heart was drenched. Flew back to Amsterdam and immediately missed my train to Spain. Took the word of an Amsterdonian, Nathalie, who had in turn taken the word of her previous train’s conductor. While Nathalie and I sat talking on Platform 12, our train came and went – from Platform 7. We discovered that there wasn’t another train until morning. Or a bus. Or a van. Or a V of geese. We pooled our money, got a hotel room in a reasonably clean and quite ancient hotel. We drank a beer in the hotel bar, got to know each other before going up to the one bed we knew we would both sleep in. And there we lay, ridiculous American, cool European. After an appropriate interlude, I touched her firm 27-year-old Amsterdonian leg. After some time she said: “Jock?”  “Yes?”  “I like it when you touch me, but I don’t want to have sex.”  “That’s reasonable,” I said.  “No, it isn’t,” she retorted.  I will never know what she meant, but it is certain that my heart was pounding like a jackhammer to be out of America and into the wilds of the world.

Jock Doubleday has written plays, screenplays, country and rock songs, science-fiction and children’s stories, a manuscript of poetry, and a book on the relative safety of childbirth locales. He is presently writing a play titled Their Town, a screenplay titled Zero Hour, and a science-fiction novel titled The Songs of Nowhere. He has published other excerpts from The Ridiculous American in The Common Online.