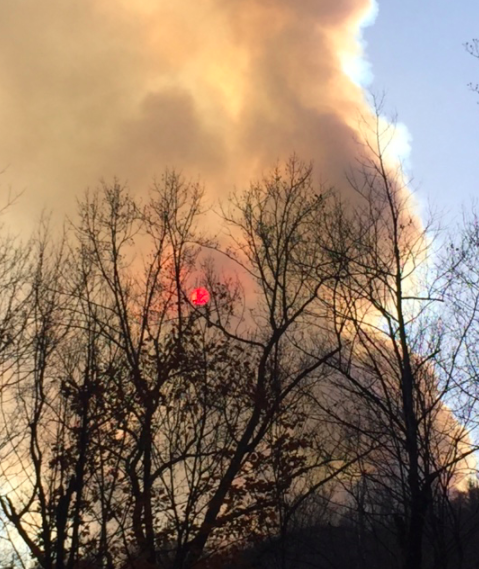 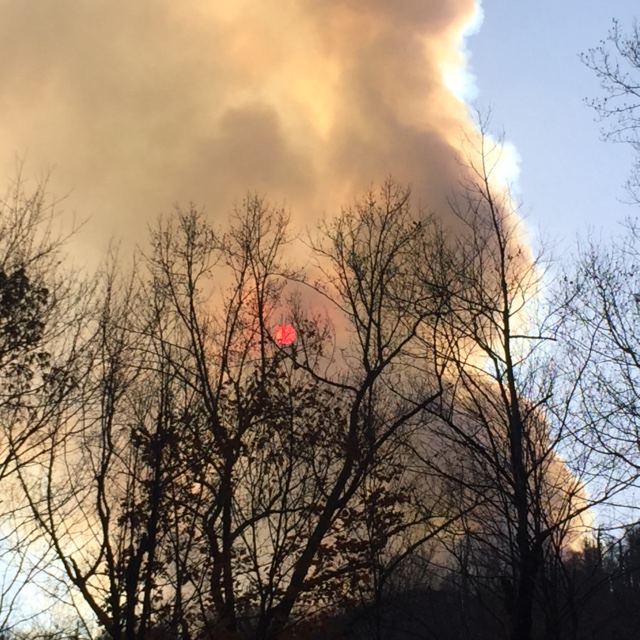 Today was on fire. I drove under a mountain on fire, the sun red in winter trees.

The cars on the two-lane highway stopped to watch the sun and smoke. In Great Smoky Mountains National Park, the traffic usually just stops for bears, which you might see far off, a black rustle in leaves or branches, or not at all.

But everyone saw the sun and stood in the cool air and took pictures and videos on their phones and didn’t say much. Smoke blocked the sky, and it was no time of day at all.

And then the cars set off again, honking their horns through a tunnel. The air stank of a paper plant, and up on the mountainside, green-gray trees stood like pipe cleaners.

The sun was sun and moon together, turning orange as I drove miles away, and then to nothing. The smoke stayed in my eyes and throat and headlights from Gatlinburg to Cherokee, the mile markers marking smoke, the air washing white.

In Cherokee, the Smokey the Bear FIRE DANGER TODAY sign was empty. In the hole where the words high or low or very high might hang, there was a void that meant fire.

I pulled over at a gas station and put a Band-Aid on my finger. I had bitten the nail until it bled like the sun.

Susan Harlan’s work has appeared in The Guardian US, Roads & Kingdoms, The Morning News, Public Books, Curbed, The Toast, Nowhere, The Awl, Avidly, and Atlas Obscura.