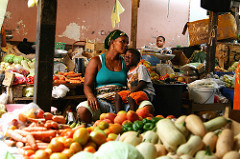 1. Lava that has a rough, jagged, spiny, and generally clinkery surface.

2. How to gloss this sharp language, its reflective surfaces, its chinks?

3. The scripted, theatrical crying at funerals: ah-ah, ah-ah, rising and falling, in clefts and gullies. O nha mae, the women groan, Oh my mother, even if it is not their mother who has died.

4. How do you cry in America? Lila asked me once. Lila was fifteen. I was twenty-three, living in Cape Verde with my husband as a Peace Corps volunteer. Lila and I sat on the stone wall, the Atlantic Ocean a mile below. Beneath us, the earth was hard and glistening in places, in others soft brown dust.

5. Like this, I said, hiding my face in my hands. Lila shook her head sadly, as though to say, Koitadu. Poor Americans. No margins to contain grief’s hot and obdurate lava.

1. A volcano that is erupting.

3. The shadow that hung over our days: dark, pointed, insurmountable. She changed with the weather: sunset painting the slope an unlikely shade of pink. Later, we would climb her clinkery pitch. Twice I would think my death was imminent:

4. Once on the ascent, clinging to thin branches, trying to find my footing on loose gravel.

5. Once at the top, when we sat to unwrap our sandwiches and found her still smoking, the air sulfur-smelling, the ground hot beneath the soles of our shoes.

6. Also, a volcano that is not presently erupting but that has erupted within historical time and is considered likely to do so in the future.

7. We didn’t fight, but anger hissed and simmered, sulfur-thick. He wanted to go to the party in Lomba, or play cards at the little bar. I wanted to disappear into the book I was reading—Anna Karenina, or Middlemarch. I wanted to pretend that the parched hillside out the window could be a Russian steppe. That, if I concentrated hard enough, the inevitable tragedy wouldn’t be there at the end.

8. We didn’t fight. Instead we walked down to the edge of town at sunset and watched the light disappear. Instead I bought hard candies from the women who sold them on the street, and held them on my tongue till they disappeared.

9. (There is no distinction between “active” and “dormant” in this sense.)

10. Sometimes the peak was blurred by dust.

1. We slept in a tent, its translucent dome like some arcane geologic formation: created instantaneously by the violent interaction between hot lava and seawater.

2. It was so cold. The beach kept disappearing.

3. Nothing between us and where we’d come from but 3,569 miles and, below the surface, the Mid-Atlantic Ridge.

4. Every few months, a dump truck would unload its tons of sand, and every few months, the ocean would take it back. Sharks swam right up to the edge. Sometimes, it was said, they shimmied up onto the sand to grab their prey.

5. Even curled into the lee of his body, I could not stop shivering.

1. When the bread was ready, the whole island smelled like yeast,

2. as though it would float, buoyed by such immoderate hope.

3. Lila carried a little shoe brush in her bag, which she pulled out when we reached the school. We took turns brushing the dust off our shoes.

4. The outermost layer of rock.

5. By evening the bread had hardened into a stony weight on the kitchen counter. I nibbled at its planetary density. I turned down the earthy stews, the rice and beans and sweet goat’s milk. I preferred the angular, the rigid, the self-contained.

6. The way fear creeps in, filling the spaces for breath.

2. It hovered there, invisible, above the highest ridge. Against the crater’s curved arm, a village of blue-eyed, dust-skinned children. They gather rocks to sell to tourists. They grow grapes, which they crush into a dark, sour wine.

3. I was comforted to know there was always someplace more remote,

5. The collapse of the mouth

1. An active volcano that is in repose.

2. In the capital, along that island’s arched backbone, I could forget the fumaroles, the sulfur-churned dreams. Here, the dangers felt different, more remote. I woke early, jogged up the hill to Achada Grande, stepping carefully on the uneven cobblestones. At the top, I paused, breathing hard, on the edge of the cliff overlooking the city.

4. Morning bright as a knifed mango. Below, the city’s main market swarmed with people and flies. Thick-haunched women sat on their barrels with tin plates of katchupa. The stray dogs—the one with no fur, the one with half an ear, the one that’s always pregnant, dragging her nipples along the ground—began their rounds.

5. Until the small airplane returned me, shaking, to the island where we lived.

6. We expected her to erupt, in the future.

1. On the island whose name means “salt,” we traversed an ancient crater, the shallow beds edged with sharp crystals. By this time I had shrunk to a smaller version of myself. He examined the strange landscape with such delicate attention. When he wasn’t looking, I ran my tongue furtively across the back of my hand. It tasted briny, slightly bitter. Did he notice?

2. The enormous apparatus of the mines cast its shadow on the empty bowl of earth.

3. Not expected to erupt again.

1. Even I learned to move slowly, up the steep cobbled streets, the sun’s bright anvil swinging,

2. I who have always been so punctual.

3. Cambrian, Carboniferous. The time of widespread seas. The time of the first seed-bearing plants. On such a scale, what’s an hour? In Creole it is the same word for “now” and “soon” and “already”: dja. And this word is almost indistinguishable from the word for “island,” “homeland”—djar or djad or dja, depending on the dialect.

4. I learned to swim through air as though moving through bright strata:

6. Past and present and future lay down together beneath our feet. History wrote itself in the drought-etched hills, in the revisions of skin tone that ranged from ink to sepia, in the antiquated Portuguese expressions and the African verb tenses overlaid with current American slang.

7. All the layers visible at once.glacier outburst flood

1. I gazed at the manioc and sweet potato fields below our house. The air sharp and dizzy in my lungs:

2. A sudden release of meltwater from a glacier or glacier-dammed lake

3. Rainy season could be brief as a single hour. We stepped out into the downpour, its small relief still enough to turn the entire hillside green.

4. sometimes resulting in a catastrophic flood.

1. Cesária on stage, imposing and regal in a maroon velvet dress and no shoes. She’d packed theaters in Paris and New York. But in Cape Verde, where she was from, half the seats were empty. A hundred escudos—almost five dollars—for a ticket. Who could afford that? Still, her voice lit the side of the volcano:

2. A continuous release of seismic energy.

4. She paused between songs to smoke a cigarette. Was she thinking of her father, who’d died when she was seven? The years she spent living in an orphanage, singing on the street for spare change? Her glass of whiskey trembled, the sort of ripple

5. typically associated with the underground movement of magma.

7. Not the sudden release and rapid decrease of seismic energy associated with the more common type of earthquake

8. (the amphitheater open to the night sky)

9. caused by slippage along a fault.

1. From Monte Preto, we could see the other side of the island: the little lights of Mosteiros and Fajãzinha.

2. Also the unused train bridge the Germans built into the side of a mountain years before, now crumbling.

4. Nothing to stand on. Below my feet, the uneven ground gave way.

5. There were never any trains to begin with.

1. Teresinha singing morna in a cloud of dust.

2. The region of the earth’s interior.

3. Rocky island where I turned twenty-three, where I learned to speak a language that could not be written down, where I pared myself to bone and sinew; lost and found, transported

4. between the crust and the core.

5. Maria Alice in her bright shawl of song, untranslatable melody

1. By heat, pressure, or other natural agencies

1. Rock, bare or awash. At Salinas, we watched the tide go out, leaving the outcroppings wet and shiny, indecipherable.

3. Later, at a party, someone put on Gil, the song that goes, “We are what we are.” I clung to him, our bodies pressed together, feet following a preordained pattern across the floor.

1. The state of being thick, sticky, and semifluid in consistency

2. How slowly things seemed to move. The old couple strolling impossibly slowly around the square, holding hands. The sun sinking into the Atlantic. His arm around me heavy, hesitant—

3. due to internal friction.

4. We would leave that island, both of us, sooner or later, moving toward one thing and away from something else

5. in which parallel layers unit distance apart have unit speed relative to one another

6. but I could not hold him there

Eleanor Stanford is the author of História, História: Two Years in the Cape Verde Islands and The Book of Sleep. Her work has appeared in Ploughshares, The Iowa Review, The Harvard Review, and other journals. She lived on the island of Fogo, Cape Verde, as a Peace Corps volunteer from 1998 to 2000, and currently resides int he Philadelphia area.