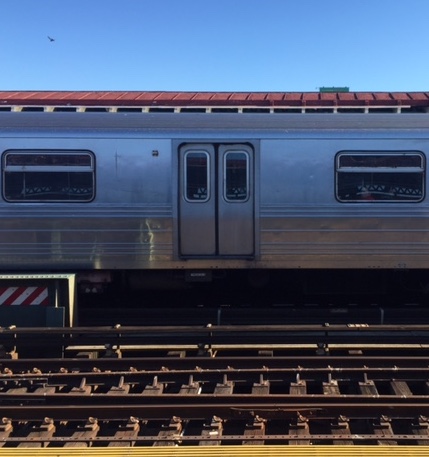 When I’m back in the city and on the subway, I tend to look at my book or at my feet and the feet of other people. I note the different kinds of shoes, their colors and states of wear.

Today is December 23, so there are shopping bags by all the shoes, held fast between lower legs and sometimes kicked out of the way of people coming and going. Bags filled with brown boxes and shoe boxes and stacks of folded clothes.

I’m sitting down, and a man stands above me with his back to me. Under his left arm is a cardboard box that says 6H on the side in thick permanent marker. He never turns around, and I never see him, but I know that he lives in 6H.

Alvin and the Chipmunks’ “Christmas Don’t Be Late” is playing on someone’s phone – grating beyond belief – and I’m not used to all this closeness anymore, but I still like it. At home, I’m always in my car, alone.

During the night, in my friend’s apartment, I can just hear the train. It reminds me where I am when I wake up and, for a moment, forget.

I figure I’ll go out and have a drink. It has rained all day, so the dog shit on the sidewalk is runny, and I have to weave a path around it.

Down the street is a house that looks like the house in Psycho. It is next to a nail salon. I go into to a church that has candles set in sand.

I walk past plastic nativity scenes in front yards and Christmas lights in windows.

The bar is decorated with red tinsel, and there’s a Jackalope on the wall. The bartender is the only other person here. He says that his mom got the Jackalope somewhere in the South, and I don’t say that’s where I live, but I say that I have always wanted one.

He dims the lights when the sun goes down, and we don’t really talk anymore.

My phone is in my bag, but I don’t check it to see what other people are doing. It is nice to be alone with the red tinsel and a stranger, in that quiet way.

Susan Harlan’s work has appeared in venues including The Guardian US, The Paris Review Daily, Guernica, Roads & Kingdoms, The Morning News, Public Books, Curbed, Nowhere, The Awl, Lit Hub, and Atlas Obscura. Her book Luggage was published with the Bloomsbury series Object Lessons in March 2018, and she teaches English at Wake Forest University.