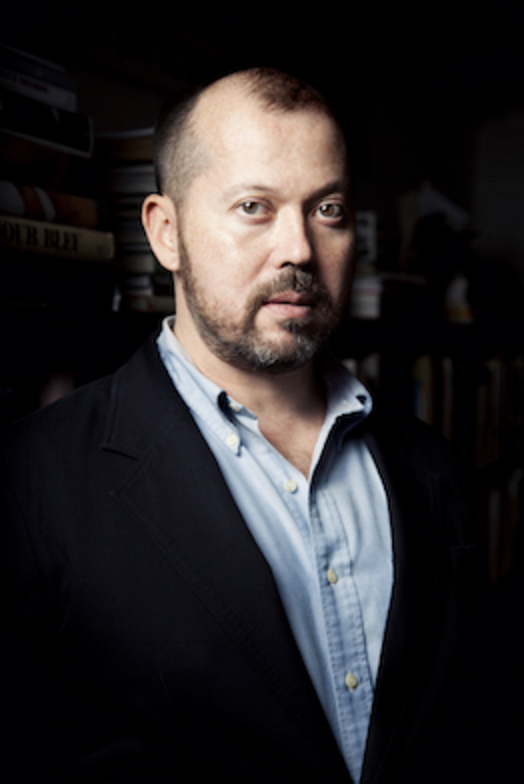 Alexander Chee’s new novel The Queen of the Night, set almost entirely in France under the Second Empire (1866–1872), is the first-person narrative of a silver-voiced American orphan who maneuvers her way to acclaim as an opera singer, via the circus, can-can dancing, prostitution, and service as the Empress’s maid. Three desires drive Lilliet: to free herself from the tenor who literally owns her (having bought her from a whore house), to become a singer, and to reunite with the man she loves. Chee’s novel sumptuously recreates the intertwined worlds of les grandes horizontales or courtesans, the opera, and the court of Emperor Louis-Napoléon and Empress Eugénie with its spies and secret police.

This winter in Manhattan, New York, The Common’s Book Reviews Editor Julia Lichtblau talked at length with Alexander Chee about his forthcoming novel.

Julia Lichtblau (JL): The Queen of the Night is imbued with a depth of knowledge about 19th century France, the music world, the literary world, and the slave-like status of prostitutes. Where in your history and interests does this book come from? Time spent in France? Musical education? Secret desire to be an opera singer? Trapeze training?

Alexander Chee (AC): After I left college, I went out to San Francisco, where I met a good number of sex workers who became very good friends of mine. At one point, I did makeup for gay pornography films for extra cash. I was also a go-go boy. So you could say I was a citizen of the San Francisco demi-monde. If I hadn’t had literary ambitions that were larger than the literary culture of San Francisco at the time, in terms of wanting to work in publishing and magazines, I probably would have stayed. It was the kind of freedom you can have when you agree to not even try to be the thing that the culture wants from you.

I was also a political activist then in Queer Nation and ACT UP San Francisco. At one point, there was this whole question of who in the group was a police plant because of a series of arrests that happened very quickly after an action began. They happened almost too soon, as if someone had tipped the police off. That’s where I became interested in the life of spies, as well as the life of activists.

JL: You mention in the book’s Historical Notes that the germ of the story was an anecdote [the late humorist and essayist] David Rakoff told you about Jenny Lind, the Swedish Nightingale.

AC: Jenny Lind, according to David’s story, was the first American music celebrity. When PT Barnum heard she was retiring, he asked if she would do a farewell tour of the U.S. She requested a half-million-dollar advance, which at the time was a stunning amount of money. He had to put up half before she would even consider getting on the boat. She toured for several years. They both became very rich and, as a part of this, she licensed all these products, like the Jenny Lind crib. You can still get it. Because PT Barnum was involved, I thought there was a circus, and I liked that idea about the opera singer traveling with the circus. When I found out that there was no circus, I was disappointed for about a minute, and then I thought, “Oh, that’s the novel. You leave Jenny Lind behind.” Initially, I was interested in 1850–52, the time of the tour, but it would be awkward [to invent a singer], because there was an actual opera singer. And Jenny is someone that no one has ever heard but people feel protective about. You could say she still has a claque.

JL: Which French novels influenced you?

AC: I dove deeply into the works of Colette. Gigi, Cheri, and The Last of Cheri. Emile Zola’s Nana. Nana was based partly on Cora Pearl.

More than any particular novel, there are letters. Letters of Turgenev, Lily Moulton—an American singer living in Paris. Many of the details of the social life at the Emperor’s court at Compiègne come from that. She wrote to her mother and aunt back in the U.S. describing her life in France as the wife to this British Lord. From her, I was able to get the incredible scale of the parties and the balls and the costumes. I had written a party scene, and after reading her letters, I realized it was way below what it needed to be.

JL: Do you think of Lilliet as an activist or, more aptly, as a feminist? The French 19th-century writer George Sand appears in the novel and she was an avowed feminist. And there’s Pauline Viardot-Garcia, Lilliet’s voice teacher, who’s radical in many ways, including living with two men and being a musical authority. But she’s not overtly critical of the patron-courtesan relationship.

AC: Feminism obviously informs the book. It was a time when the women who were able to be free had to create these larger-than-life personae and whatever freedoms they won came from those personae. Celebrities were allowed freedoms that ordinary people weren’t.

George Sand and Pauline are not there by accident. Sure, I was trying to think of who would be the perfect voice teacher as a character. Then, I discovered the friendship she’d had with Sand and discovered Sand’s writing about the “New Woman” and read Pauline’s letters, which are wonderful. Pauline did write about how disappointed she was that so many opera singers were courtesans, and I thought that was interesting in terms of her taking Lilliet on as a student.

I would say Lilliet’s feminism is a survivor’s feminism. She wants to believe that she could have this other life. In some ways, the novel is the story of Lilliet going from powerful woman to powerful woman, trying to get them to teach her to be the person she wants to be.

I nearly ended up writing a novel about Pauline. She’s such an incredible woman.

JL: Do you have musical training?

AC: I studied clarinet and voice. As a boy, I sang in a couple of opera choruses—“Tosca” and “Carmen”—in Portland, Maine. The Portland Symphony did Carmen as a concert. It was completely thrilling.

JL: In the notes, you say that Mozart’s “The Magic Flute” undergirds the story? Can you explain?

AC: I originally had the idea that it would be a reinvention of “The Magic Flute” as a novel. I got the libretto, and I read it, and I thought this makes no sense. The hero isn’t a hero. The magic flute isn’t used to any purpose. It doesn’t solve any problems or cause any problems. All these women are propping up this man, Tamino, so he looks like a hero even though he isn’t a hero. And Pamina [the daughter of the Queen of the Night] is told to wait for this guy to save her even though she’s able to save herself, and as soon as he shows up, she betrays her mission and agrees to follow him off into his strange pact with the wizard.

I put the libretto away, and I kept writing the novel. About three years later, I was moving, and I found the libretto and reread it, and I was really shocked at how the themes of the opera had entered into the novel as if it were written from the point of view of Pamina. The Comtesse de Castiglione is the Queen of the Night, the emperor is the magician, and the tenor is the demon who falls in love with her.

It’s all about the way that women sell themselves out to men all the time. I thought what could be more perfect for the framework for this book.

JL: Speaking of women selling themselves, I keep coming back to this notion that the courtesan structure was a form of slavery where women were literally bound by contract to men.

AC: It was very much a fantasy for women to have their contracts with their maisons closes [brothels] bought out by their customers. It almost always turned out badly. It almost never ended up in marriage, and it was lonelier than before.

One inspiration was Celeste Mogador, who was a kind of cancan queen, a courtesan, also a hippodrome rider. She worked in a maison close and was seduced into a life of prostitution by a prostitute who was kind to her when her mother and her boyfriend abandoned her as a child. By having contact with this prostitute, she ended up being registered. Mogador informed the book a lot, in the ways women could be bought and sold. Police would return a woman to her husband, who would force her to sit in the windows of his shop and display herself [while he made] deals for sex with her. It seemed so insane for this to coexist with domestic life.

JL: Can you elaborate?

AC: Celeste Mogador was Bizet’s neighbor, and he would sneak out of his country house and use her piano. He was writing Carmen over there. She had been a courtesan, and she married her most wealthy lover. His family disowned him—that was common. The court ordered her to write her memoirs to pay off her debt, and as soon as they were published, they were banned for being obscene. They’re available in translation from Counterpoint Press, The Memoirs of a Courtesan. They’re great. They’re not particularly obscene. There’s not really any sex in them. She wasn’t interested in the sex she had. But she described a lot of other things, including the treatment of women, which was obscene, and maybe that’s what the court objected to the most. The interior of the women’s prison [in my novel], the mistreatment by the guards—all those details were made possible by that memoir. And she became a novelist in Australia! There was a gold rush in Australia, and her husband went out there. She went with him, and he went bankrupt, so she started writing novels to support him. It’s hilarious.

JL: The tenor is a fascinating character. He’s someone who cannot fundamentally grasp the wrongness of his expectations that Lilliet will love him despite the fact that he owns her.

AC: There’s always a guy who frequents prostitutes who ends up believing the dream that he bought is real and wanting to live inside it. And [guys like this get] angry when it’s not true—as if the prostitute was insincere when the prostitute was simply doing the job. It’s a strange thing to point out to someone that they’ve fallen for their own fantasy. Almost impossible.

JL: The plot is so complicated. How did it evolve?

JL: As a writer you probably struggled with wanting to make the composer the romantic hero, the good guy, yet in the end he’s a disappointment.

AC: Yes, he’s Tamino, for sure. It’s tricky to make romantic love the center of a novel. I didn’t want it to be this romantic fantasy fulfillment.

Alexander Chee’s novel The Queen of the Night will be released by Houghton Mifflin Harcourt February 3, 2016.

Julia Lichtblau is the Book Reviews Editor for The Common. Her work is forthcoming in Blackbird and has appeared in The Drum, Superstition Review, American Fiction 13, Narrative, and The Florida Review, among other publications. She was one of two finalists for the 2015 Kore Press Short Fiction Contest.

Photo credits: Headshot—M. Sharkey; Image of the Queen of the Night stage set by Karl Friedrich Schinkel (1781–1841) for an 1815 production—Public Domain.

The Value of an English Garden in Brooklyn

JULIA LICHTBLAU
When the pandemic hit last spring, I felt like Marie Antoinette playing shepherdess. There is no sacrifice or bravery in growing or writing about flowers. Now I think: So what? The garden needed us, and we needed it. We weed, plant, prune, mow, fertilize Fridays and Sunday.

Willie Perdomo To Join Editorial Staff of The Common