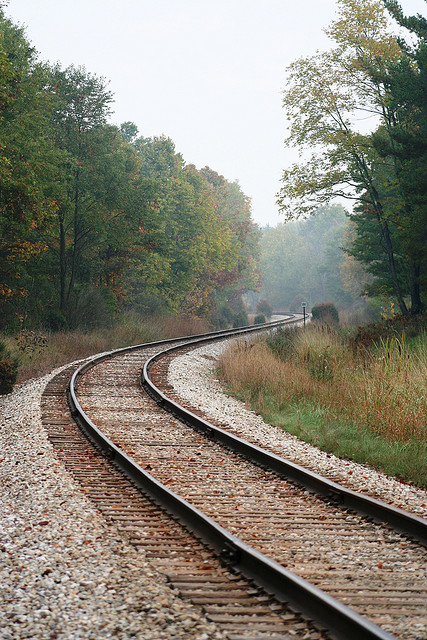 The railroad track that ran behind my childhood home–one of several cheaply built ranch houses set on the edge of a small town, pre-approved for FHA loans–seemed a link to everything in the world, the same as every river or creek I passed over on bridges or waded in while fishing, led to bigger water: the Ohio, the Mississippi, the Gulf. Rails led on to other towns, led to St. Louis, which, according to elementary school textbooks, led everywhere west, connected everywhere east.  And I wanted to be close to them.

When the train passed, trailing a hundred or more coal cars just loaded from the mine a few miles away, the thin panes of our windows rattled in their frames.  A small field lay behind the house planted with corn or milo in the summer, fallow in winter, a narrow stand of trees at its far edge, and beyond those, the railroad. There, I would sit and whittle sticks with a Barlow pocket knife, listening to birds and the wind, watching bugs crawl across arroyos of treebark, until I felt approaching diesels in my chest.

Once, I heard voices and the sound of metal on rails, but no engines, and slid down the wooded bank to hide amongst honeysuckle.  There I saw a crew of men, all black, standing on a maintenance of way car as it moved along the tracks. Signs posted at the entrances of surrounding towns warning people of color “don’t let the sun go down on you” had been taken down only a decade earlier. The car slowed, and the men threw metal drums onto the gravel siding, then turned, picked up another with ease, muscles deeply cut, their voices conversational, joking, the talk of men at work. After the car passed, I walked onto the tracks where the cargo lay discarded along the heavy pale rock, the smell of the creosote covered ties sweet and heavy.  A lid had been bent enough to reveal steel spikes packed inside.  I put my boys’ hands around the edges, pushed with everything.  Nothing.  Like trying to move a traincar, and I pictured again the workmen, how easily they’d tossed these barrels aside and wished someday I could be that strong.

The more I visited the tracks the further I’d walk along them, counting the number of steps I could stay balanced on a rail.  I often visited the old tobacco mill, which was the subject of the brass historical marker next to the main road, site of my first field trip as a kindergartener.  In the 19th century it had been the largest processor of tobacco shipped north across the Ohio from Kentucky.  Now it served as a storage garage for the farmer whose pastures lay across the tracks.

Just past the mill was a small pond where turtles by the dozens poked slender heads above the solid green mass of algae that covered the surface.  And a little further still, there was a small trestle running fifteen feet above a creek, where I scrambled down the railbed to the cool damp shade beneath the bridge. I followed the creek on a cow path under oak and maple, the occasional catalpa, leaves loaded with its namesake worm.  Sun and shadow moved across the ground in time with the leaves above, and then, there at my feet, lay a perfect animal skeleton, bones bleached and picked clean.  A ring of auburn hair framed it, and my first thought was of some vapor ray from an alien spacecraft, but even at ten, that explanation only held up for a few seconds.  I studied this mosaic for a while, then looked up to see cattle standing in the tall grass beyond the trees.  A calf, I thought.  Must’ve wandered off from his mama and died here.

I walked on and came to an old concrete dam spanning the creek, an abandoned remnant of rural prosperity.  There were three upright pylons–one on each bank, one in the center–and I climbed the nearest.  Two steel I-beams went across to the middle, and I tested one’s stability, inched out onto it with hands and knees, then a little further, looking down the whole time at the rocks lining the bottom of the reservoir pool, at the logjam pushed up against the rusted and bent bulkhead gate from when storms flooded the bottomland.  I kept inching along until finally I reached the next pylon, where I sat, legs dangling over the edge, believing I was the only person who’d known this place since the time the builders had blocked this stream, and now they were gone, and the water had pushed through.

All the rest of that summer, I went there, sometimes with a friend, sometimes alone.  Each time there was a feeling of enchantment, as if this place lay along a different plane, and that one day, I would return and none of it would be there.  I fear this even still.