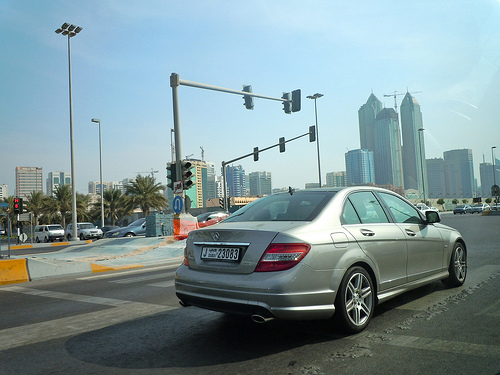 Before I moved to the United Arab Emirates, I sold the one car I’d ever owned—a four-door Honda, emerald green, white scratches webbed along the doors from the previous owners. I would be gone for just ten months, but the car had an old engine and a dashboard of permanently lit warnings lights, and, every month or so it seemed, a different part broke and needed repairs.

At a used car dealership in Jacksonville, a man gave me a check for a thousand dollars, and I left for a year of highways and rental cars, clovers of glimmering asphalt curling through the desert. I tried not to feel as though losing this thing I had owned meant something, but I had an embarrassed inkling that I would return and stay carless. This had less to do with the practicalities of money and time or the stagnant used-car market in a smallish city and much more to do with my own capacity for stubbornness and retreat. I knew myself to be a person who could tolerate the margins of any place for a very long time.

For most of my twenties, I lived in driving cities but moved slowly myself, by foot or bicycle, and, for a year in New York, by train. It is true enough that I wanted to save money to write and to travel, but it’s also true that the logistics of owning a car made me tired. Driving, too, overwhelmed me. It required an alertness to a fluctuating system of people in machines, the presence of mind to avoid accidents and address mechanical failures. Driving demanded a person of focus, a person in charge, and when I biked home at night in the dark with the rush of wind against my skin, the light on my handlebars a small flash on the shoulder of the road, my muscles moving fast, my whole body floating—this was a feeling I could burrow into, unhurried and invisible like a secret. To be a pedestrian in a driving city is to move without collaboration and follow only the simple politics of avoidance: watching for cars doors, stopping at intersections and driveways, learning what can crush and how to stay away.

My bicycle life was lived south of Phoenix, mostly in Tempe, Arizona, a sprawling city of flat roads and waving lines of heat, railroad tracks and homeless veterans weathered by a sun that seemed closer and brighter than it did in the rest of the country. In the neighborhoods where I lived, families grilled meat in the backyards on weeknights, and radios sang out Mexican polkas. Some of the front yards had real grass watered by pools of flood irrigation and dotted with fat inky crows, and the rest were covered in pink gravel or sand decorated with saguaros and agave. There were citrus trees—grapefruits, oranges, lemons—and in the spring, the Bartlett pear trees sent a heavy sweetness into the air, as private and personal as sweat. At night, teenagers played pick-up basketball, shirtless, in the parks, and college students poured themselves into cocktail dresses and muscle cars and drove north to the bars and strip clubs of Scottsdale. On the perimeter of the city, blue-gray mountains rose through the dust, and all day long the planes hung close, lowering and rising. My last year in Arizona, I left for work each day at 6:30 AM, biking to the newly built light rail that connected me to a bus so I could teach in another suburb by 8:00. Always, I was tired, but when I reached the train tracks each morning and its network of metal cables, the sun would be low in the sky, the light pink and pale yellow, the air outside still cold enough to shiver. At a certain pace, coasting into the station, I could see everything.

At twenty-nine, I left Arizona for graduate school in Florida, and a couple months later, I purchased a car for the first time. I had moved to Florida with a woman, a Ph.D. student willing to finish her dissertation from a distance, and I bought a car in large part because of this woman and how I thought it should go between us. We were in love, real love, and I wanted us to live together like adults, which was hard by foot in a rainy place of slow buses and infrequent sidewalks. She had owned a car once but had wrecked it, driving too fast in the desert.

Love was new for me. Another person, a wild force that broke me open. This is the way for everyone, I know, but I was almost thirty and had spent many years alone. I had not imagined myself enjoying love. I have said already how I felt about traffic and navigation, traveling through an assemblage of linked, moving parts.

This woman, the first woman, was afraid of flying. She would say it out loud, like it was something another person could know about you without also seeing your whole interior landscape. When we flew together, she would squeeze my hand, and I would relax into the seat while the wheels lifted. My own fears, at that time, lacked the codes of phobias and were instead the obvious, unspoken kind that required no interpretation. I was in love, finally, violently almost, and I wanted to keep that feeling close to me and constant, with this one person, forever. I did not know, then, that everyone’s fear is inelegant. I did not know that fear ulcerates and darkens when, glimpsing its shadow, you turn.

I have been back from the UAE and back in Florida for nearly two months, and each day, walking through my neighborhood to the university where I teach, I memorize the slopes of parked cars, their glossy paint shining in the sun, and I weigh the thrill of fast and new against the comfort of frugality and restraint. In a driving city like Tallahassee, where the sidewalks disappear into traffic and the intersections that should be squared have been softened into domed shoulders, where buses travel indirectly and sometimes unmarked, not to drive is to live unattached: a small life made smaller, contained.

In seven months, I will no longer be a graduate student with a graduate student’s salary. My new life, where it will happen, is a mystery. I might live in a big city and not need a car; I might live on the other side of the country, farther than a  cheap used car can travel. Regardless, during my last months here, I will stay cloistered, working. I can wait a little longer for greater mobility. Moving slowly can be a practical inconvenience and not the siren call of an old life, wooing me back into solitude. My slow-moving Tallahassee rituals are new rituals, even if the trip each week to the grocery store feels like an old memory: walking past quiet streets of shuttered houses and flower boxes, past live oaks wreathed with Spanish moss, and the last pocket of stillness before the service road rises up a hill and runs flush with the highway. Here, in a valley of asphalt and culverts, cars swish past on the other side of the embankment above me, and I can stand in the shadows, protected, lower than the place where anyone driving past and looking down can see.