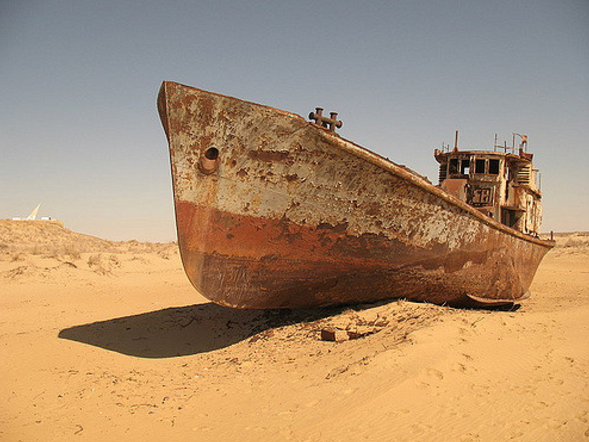 Fifty years ago the white-crested waves of the Aral Sea broke over the top of the bluff I am standing on. Today there is not a single drop of water here. This place is called the graveyard of ships, where skeletal vessels marooned on sand dunes wait for a sea that will never return. The rusting hulks of twelve ships covered in chalk graffiti are the remains of what was once a thriving maritime and fishing industry in the now-defunct port of Moynaq, which lies in the northwestern corner of Uzbekistan. I climb down from the bluff to examine the ship corpses. The air is heavy and stultified; I feel so light-headed that I lean against the sun-baked metal for support. Looking up at the wall several meters above me, I imagine the weight of the water-that-was pressing down upon me.

The Aral Sea once had a surface area of around 67,500 square kilometers – about twice the size of Belgium – and was the world’s fourth largest inland body of water after the Caspian Sea in Asia, Lake Superior in North America, and Lake Victoria in Africa. Its cobalt expanse straddled Uzbekistan to the south and Kazakhstan to the north, and was fed by the majestic Amu Darya and Syr Darya rivers. But in the 1960s, after the Soviet state built a sprawling network of irrigation canals siphoning water from the rivers into the region’s ever-thirsty cotton fields, the sea began to shrink and retreat from its shores.

I walk along the town’s one road, a dusty and seemingly infinite stretch of tarmac. The ship cemetery lies at one end and a dilapidated fish cannery at the other, bookending the town’s decline. This factory used to send 22 million cans of pike, perch and other fish all over the Soviet Union every year. Now, its buildings are carcasses split open to the elements, rotting in the unrelenting heat. The cloudless sky glimmers azure through gashes in the bricks, and children scrabble for treasure among discarded bits of cardboard and plastic.

At the gates, a tall, gaunt man with deep lines on his face offers to show me around. He tells me he worked here for 30 years, tending the furnaces where the fish were cooked, until the factory was shut down in 1991. He points out where the refrigeration unit stood, the building where the fish were skinned and de-boned, and the canteen where the workers ate together.

But to see the Aral I must leave the dried-up port of Moynaq and head due north, towards Uzbekistan’s border with Kazakhstan.

Driving towards Moynaq earlier that day, along a raised strip of land and over a bridge, I could see how the port once sat on an isthmus. In bold red letters a sign declared MOYNAQ, and two undulating lines – white above blue – described the regular waves of a child’s drawing beneath the port’s name. Now, almost three hours away from Moynaq, the GPS clipped to the dashboard of our jeep shows a splotch of cornflower blue at the top of its screen. My driver says we’re getting close, but all I’ve seen are electricity pylons and sparse clumps of spiky green bush poking through the cracked earth. Occasionally a sudden gust of wind picks up fistfuls of sand, salt, and dust and flings them at the windshield, engulfing us in a murky cloud.

The off-white of the sky melds with the off-white of the salt-encrusted land, blurring the line where earth leaves off and air begins, until a huge grey landmass – the Ustyurt Plateau – looms ahead of us. We snake up its sheer side along a rutted track, leaning sharply into the road’s narrow turns. As we round the final bend and drive on to the flat top of the plateau, the Aral Sea suddenly appears – an intense slick of cerulean brush-stroked across the horizon. From here it looks static and unreal, almost too vivid. And stretching before the sea is a lumpy, lunar landscape, where dunes that once dwelled below the waves have been left naked and exposed.

The beach is deserted. Just the rusty bed of a large ship lies stranded at the edge of the water, where the sand, salt and crushed shells give way to thick, black mud. I wade into the waves, each step an effort to extract myself from the sucking, sliminess underfoot. But once the tepid water reaches mid-thigh, I lie back and watch my mud-spattered feet emerge in front of me, the sea’s now-elevated salt content effortlessly keeping me afloat. There are no fish, plants or any other living things visible in the water.

Later that evening, after we set up camp on an area of high ground overlooking the sea, my driver and I share a meal of demleme – a stew of carrots, potatoes and lettuce – and down a few vodkas. “It’s medicinal,” he tells me. “For clearing the dust from your lungs.” The sun sinks languidly below the horizon, tingeing the Aral pink around the edges, and then in its place, a full orange moon appears, trailing a chain of reflected moons across the flat, inky water. We raise our glasses: “Long live the Aral!”