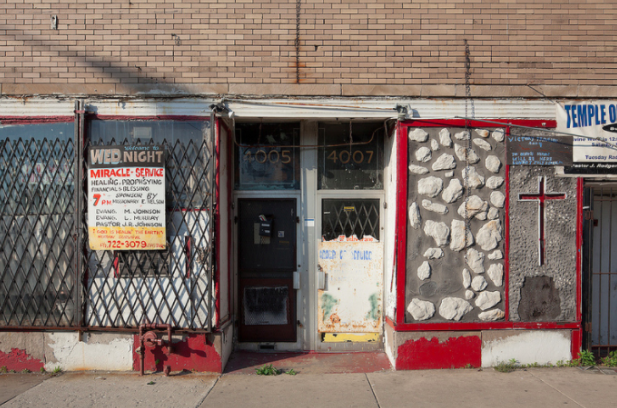 Those are traffic lights. They help stop people from
driving into each other. That’s a crescent moon and star
on top of that building. It means the people inside are part
of The Nation. That’s a gas station. That’s a McDonald’s.
That’s a Burger King. That’s a fried fish and chicken joint.
This blue thing is a mailbox. It’s for letters. You use it when
you have someone to write to who left. You’re right, that’s
an old car. The window broke so they use a trash bag to keep
the heat in or keep the cold out. This looks like a paper cut,
son. That’s a drop of blood. It’s warm because you’re warm
inside. That’s an ambulance for taking people to the hospital
when they’re hurt or losing blood. Not like you did, but a lot
more than that. That’s a police officer. That’s a gun on his hip.
Those are dangerous. That’s a fire truck and those people riding
on the side of it are firefighters. That’s really a church, they just
put it inside an old store. Yes, that’s a painting of Jesus. His skin
is different colors in different people’s houses sometimes. That’s
a bad school. Those metal bars keep bad people out. That’s where
grown-ups get their alcohol. Yes, kids can get candy there. This is
money and this is money, too. Not everyone has that. Don’t pick that
up. No, I’m not quite sure what that is. That’s a tree, son. No, I’ve never
climbed one or wanted to. Those are probably pigeons. C’mon, you know
that’s a belt. No, belts aren’t only for when kids are bad. This is a good school.
This is why you’re here. This is your uniform, a blue shirt and black pants. Yes,
that’s a picture of Jesus hanging over there. Remember what I told you about that.