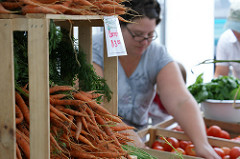 from The Ridiculous American

Julie stands alone looking at a cornucopia of flowers. She is quite a bit shorter than one would imagine, and younger looking too, very fit, with dark brown bangs, tastefully blonde-streaked, fringing her sunglasses. She wears old green cotton pants (cargo pants?) and looks nothing like a movie star.

Jock: Are you Julie?
(She doesn’t turn. Should I leave this person who might not be Julie alone-— and who also may be Julie and is not turning around because she just wants to look at flowers? Probably. But I did bike all the way into town to talk to her. A few moments of courage-gathering. A trifle louder.)

Jock: Are you Julie?
(She turns and looks straight at me, says nothing. A moment.)

Jock: No. I think that I’ve met you only in my imagination.

Julie (laughs.): You have such a familiar face.

Julie: You live here in Ojai?

Jock: You were looking for me?

Jock: I wrote a play a number of years ago . . . (Unzipping backpack.) That is, if you’re still up for acting.

Julie: Not plays. Too many lines to memorize.

Jock: Oh. Well, we’re making it into a movie . . . Of course, everybody’s making everything into a movie, these days.

Jock: Vaclav Havel, his incarceration in the late ‘70s and his subsequent rise to the presidency. It’s called “The Eden Game.”

Jock: I’m not much of a marketeer. I just love the guy, so I wrote about him.

Jock: Yes, yes.
(Friends of hers walk by. She talks with them for a few moments.
They walk on.)

Julie: I won’t be able to read it for a while. Your address is on it?

Julie: What else are you writing?

Jock: Do you have children?

Jock: I often wish I had been a woman so that I could give birth.

Julie: Well, it’s too bad I’m not a man and you’re not a woman. I always thought it would be better to be a man. We could change places.

Jock: I think there is a movie about that. Steve Martin . . .

Julie: Yes, but that’s a comedy.

Julie: Yes. All right, then. Maybe I’ll see you again at the market.

Julie sent me a long hand-written letter a few months later with her thoughts on the play and other things.

I want to give you a respectful, i.e., non-intrusive (non National Enquirer) summary of Julie’s hand-written response to my play “The Eden Game” (her letter dated April 12, 2004). But I’m not sure how.

Julie’s writing is so dense with political references and personal philosophy, and so gracefully crafted with humor and kindness, that no summary could do it justice.

I will tell you, though, that her letter warmed every cockle of my jaded heart, starting with her first sentence: “It’s Julie.”

I will also tell you that she wrote the letter on two sides of one piece of unlined paper, of a color that one might call “recycled” if such a color existed, and that her occasionally florid and ever-so-slightly-hurried script never strayed from the lines that were not there.

It is nice to have time to sit down and write you a letter. The days have been somewhat full: I moved to Poland six weeks ago.

“Why in God’s name would someone move to Poland?” is a question that may be on your lips. It is indeed a question on many lips here in a land famous for coal—or at most mineral water.

Well, I met a Pole in Ojai, and she seemed so grounded—quite unlike my American friends, or even me. I was impressed. I went on the internet and found an English language school in Bielsko-Biala in southern Poland. The school is associated with something called the European Project. I am now a pedagogical cog in a great machine, whose aim is to churn out English-speaking nurses by the hundreds.

It is not bad to spend six hours a day in a room full of Polish nurses. Of course, my fantasy had been a room full of single Polish nurses . . . The reality is quite different. About 99% of them are married and well past dating age. The rest, the young ones, have boyfriends.

In my class in Zywiec (zhee’ vee ets) there is a nun who wears her habit to class. When it came her turn to answer the question, “Do you prefer Polish men or Italian men?” she answered, “I prefer Jesus.”

To keep things lively, I created a rather risqué document that I call the Underwear Key, which is a sheet of paper with drawings of men and women’s undergarments and the English words attached to them. The nurses love this. The nun held it up for the class to look at without a trace of hesitation or irony.
I live in a modest home with beautiful grounds, quite close to what the Poles call “mountains” but which are barely foothills to the well-traveled. If I walk out my door, I can be in these mountains in fifteen minutes.

The first volume of my book, Spontaneous Creation: 101 Reasons Not to Have Your Baby in a Hospital is finally finished, so I have time to work on my plays and screenplays. I have so many things I want to write, and by the time you get to be my age (45) you realize that life is triage . . .

Jock Doubleday has written plays, screenplays, country and rock songs, science-fiction and children’s stories, a manuscript of poetry, and a book on the relative safety of childbirth locales.