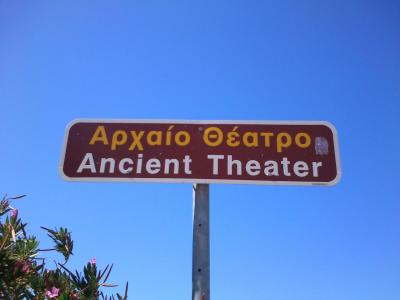 EXODOS. I deciphered the Greek letters, extrapolating from the Cyrillic alphabet learned in college Russian. Exodus! A hairy Charlton Heston parting the Red Sea in The Ten Commandments popped into my mind. A domestic Moses, my husband spurred our lagging, quarreling kids on to baggage claim and immigration.

No one wore bed sheets or laurel wreaths in the Athens airport. Exodos means exit in the cradle of Western Civ. Seeing the familiar word was a little like being greeted by a long-lost relative holding up a Welcome Home sign. Greece is so deeply embedded in our Western brains, we hardly realize it. Quick: What does a bank or museum or stock exchange or court look like? The Parthenon, of course.

I grew up on the Greek myths, but never seriously studied the classics. Truth be told, my husband David and I avoided Greece for years. He had memories of ancient sites overrun by package tours, a brush with corrupt officials, dreary modern architecture, and mediocre food. I’d never been there. We’d seen lovely Greek temples in Agrigento and Turkey. The Acropolis had probably gotten a bit over-rated after 2,500 years.

This year, after an assertive campaign from our daughter, Zoë, a student at an arts high school, abetted by our 12-year-old son, Gabriel, who was obsessed with Spartan warrior garb, we caved.

Maybe we needed a face-saving excuse to get over ourselves. Kids are useful that way.

When we got to our rental apartment, I cracked the vocabulary section of our guidebook and made a rushed effort to memorize a few letters before dinner. It was harder than it looked. My memorization skills were rusty. Cyrillic proved a misleading Rosetta Stone for lower-case and script. The letter that looks kind of like the Russian “ts” is a lower-case mu or m in Greek. In Athens, fortunately, road signs and the names of historic sites are transliterated into the Roman alphabet.

We stayed near the Olympic stadium, not far from the Acropolis. The neighboring buildings were charmless, boxy, mid- to late-20th century construction. Dogshit and feral cats abounded. But Athenians were warm, the food tasty, and the euro crisis kept the tour crowds down. Strike those objections. We poked around the streets, looking for take-out coffee, breakfast food, Greek SIM cards for our mobile phones to avoid international roaming charges. My sign-reading skill improved slightly. 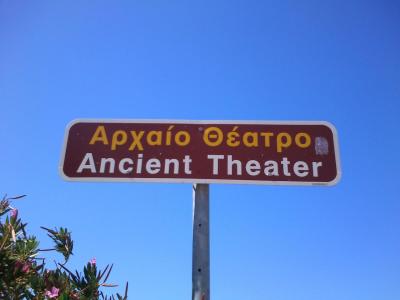 In English and Romance languages, pretentious words have Greek and Latin roots. Humble words come from the Anglo-Saxons and other hairy Nordic tribes. So we’re told. Who knew so many humble words have Greek roots? Kleidí—a sign under a picture of a key read. Clé, llave, chiave! A locksmith! The bakery signs read Fournos. Four, horno. Furnace. Oven! A waitress trying to serve us the right size cappucino held up one little cup, then two: “Monó? Dupló?”

The kindly owner of a restaurant near the National Archaeological Museum spoke no English. We couldn’t even thank him in Greek. Embarrassed, we flipped through our guide. Evcharistó. As in Eucharist? Transubstantion in a plate of moussaka? There’s no etymological tie to the Body of Christ, except perhaps via the notion of grace. Both mean “to offer graciously,” according to my Concise Oxford Dictionary.

From Athens, we drove south into the Peloponnese, the Myths and Heroes belt. Corinth, Mycenae, Olympia, Sparta. Arcadia, Achaia, Lakonia. We expected centaur-crossing signs after a day or so. We’d brought Robert Graves’ The Greek Myths Vols. I and II. By the end of the trip, the covers had fallen off.

On Day Four, we stopped in Napflio, a tourist town on the east coast of the Peloponnese and site of the first Greek government in 1821, where we promised our son a visit to the War Museum. After wandering in circles in staggering heat, we arrived too late. The Polemiko Museio is closed, a soldier told us. The Polemic Museum! How charming. Make polemic, not war.

Sometimes, we felt as though we’d walked into an Astérix comic book transported to Greece. Bank is trápeza, national, ethnikí. The National Bank of Greece is Ethnic Trapeze! Given the precarious state of the economy, that had a poetic ring. Riddle: How is a bank like a trapeze? Trapezium is a quadrilateral with at least one pair of parallel sides, a bar between two ropes. Bank comes from the Frenchbanc, a bench where transactions took place. Trápeza, says Oxford, is Late Greek for table. Cash on the table. Elementary, my dear Oedipus.

After a long, hot drive through Arcadia, which contrary to Western literary convention is not gently verdant, but mountainous and barren, we arrived low on gas and cash at a small town that had many gas stations and even more ATMs. David was determined to pay by credit card, but each station’s attendant regretted a “problem” with the credit card machine. David dug in his heels, persevering until he found the one station that took cards. He didn’t want to pay foreign transaction fees. Cash is a tax dodge. (See “euro crisis.”)

Our destination was Kardamili, a seaside town in the thumb-shaped Mani peninsula, historically and geographically Greece’s wildest region, where inhabitants feuded for decades from fortified towers that still dot the region. The Maniots were the last of the Greeks to abandon the ancient pagan religion, in the 9th century, six centuries after Constantine, wrote Patrick Leigh Fermor, the British travel writer and Hellenophile, in his 1958 classic, Mani: Travels in the Southern Peloponnese — our other literary companion. Maniots, he wrote, combined Orthodox funeral rites with the belief that Charon rows the dead across the River Styx to Hades and a style of improvised rhymed dirges that probably pre-dated the Seige of Troy. As tourists, we lacked an inside track to Maniot funerals. But the taciturn boatman who rowed us through the subterranean river of the vast Diros cave could have passed for Charon. His only phrase as we glided past stalactites and stalacmites was “Kip head down!”

Hyper-Agora! The supermarket in Stoupa (outside Kardamili) had no columns or capitals or acanthus growing between stones. You put a euro in the slot to release a cart, like in France. You get it back when you return the cart. No interest, but you recoup your capital, at least.

Zoë (whose name means life in Greek) began saying, “Opa!” whenever I announced my linguistic epiphanies.

Epiphany originally meant the appearance of a god to a mortal, according to a sign in the Acropolis Museum. On the Acropolis, in ancient Corinth, at Mycenae, and Olympia, we looked at stones, broken and whole, columns, capitals, architraves, pediments, entablatures, heads, hands, unidentifiable fragments. The foundations of Western culture. Right here. No gods appeared, no oracles spoke. I didn’t expect to be so moved. 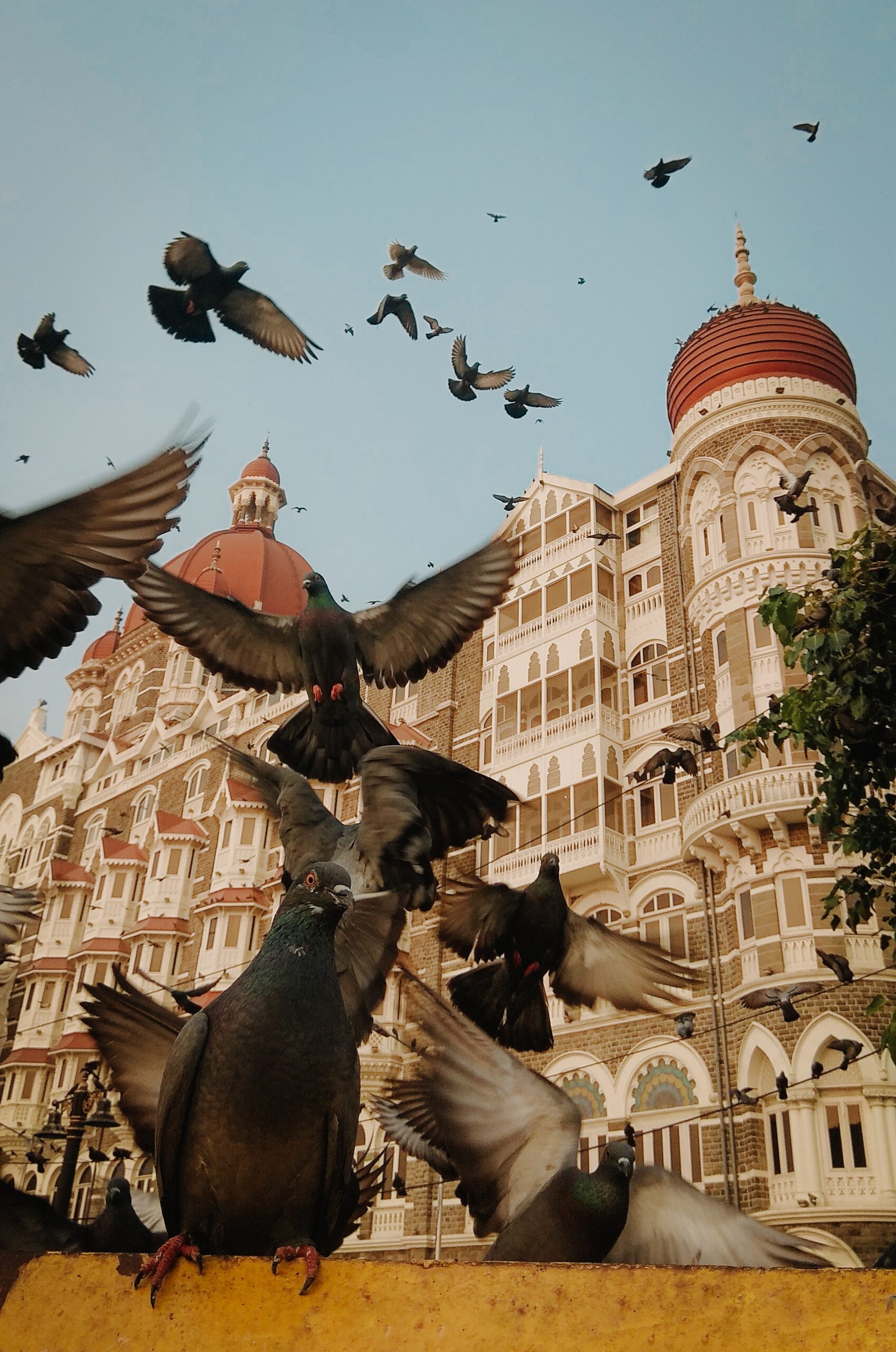