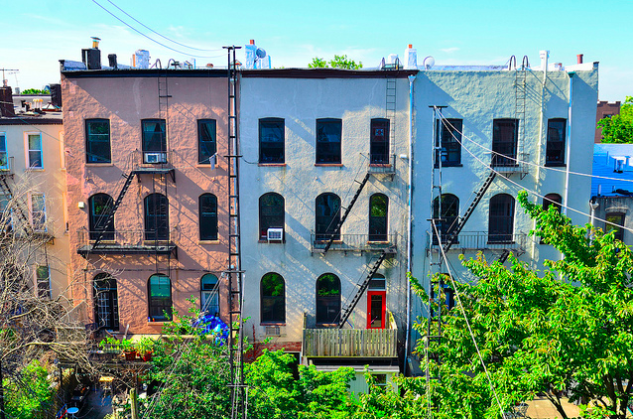 My friend Alison and I have had a running joke that we’re cousins. When we met several years ago, she said, “I bet we’re related. My great-grandmother’s maiden name was Lichtblau.” Her father, like mine, left Vienna in 1938, but she didn’t know much more. Still, we called each other “chère cousine” for fun. Her father, like mine, left Vienna in 1938, and her great-grandmother had the same last name as I do, Lichtblau. Now I’m very fond of Alison, but never seriously believed we were related. The name’s not as rare in Austria as it is here, and I have a family tree going back to my great-great-grandfather—which gets us to 1811, amazingly. (My grandfather, born in 1877, was forty-three when my father came along in 1920, which partly accounts for the long generational leaps.) Alison didn’t know her great-grandmother’s given name, but her married name wasn’t on my tree and had never come up in family reminiscences. Reminiscence is to us Lichtblaus what watching sports on TV is to other families. It’s what we do when we get together. We sit in my aunt and uncle’s Upper West Side apartment on furniture that somehow made it over in 1938 despite looming disaster, and within five minutes, we’re talking about Grandma’s lover. So, I was pretty confident that I’d have heard of Alisons’s great-grandmother if she was one of us.

Vienna has been a reference point all my life. Not an entirely comfortable one, for obvious reasons. Our large Jewish family was scattered, decimated, despoiled. I once asked my father, who died in 2004, whether he would have stayed if the war hadn’t happened. He looked at me like I was nuts. I totally get it. Descriptions of sclerotic World War I-era Austrian society in Stefan Zweig’s The Post Office Girl or Joseph Roth’s The Radetzky March make me feel as though I’m running out of air.

I’ve been to Vienna maybe six times. In my memory, each feels like one tiny piece of a 1,000-piece jigsaw puzzle with the most important sections missing. The first time, in 1964, we visited my grandmother’s only surviving sister. I never saw her again, but after we left, she secretly opened a savings account for me, which held $15,000 when she died in 1981. Apparently, she thought I was being neglected. In the 1990s, I returned several times as a reporter covering OPEC meetings. Once, I paused my chase of oil ministers and had coffee with my uncle, Hans, an oil economist who also attended the meetings, and his cousins, Heinz and Rudi, who’d returned at some point to Vienna from Australia. In 1993, we had a first-ever and only family reunion there on the occasion of an exhibit of my Aunt Lotte’s paintings. We hit the hot spots—the family house in the suburb of Hietzing, my father and uncle’s gymnasium, the family smoking accessories factory (now a nursing home), and the Jewish Museum, where coincidentally there was a lecture on an architect-cousin, Ernst Lichtblau, whose Wiener-Werkstätte-era furniture is scattered around family dwellings. His couch is in my living room.

Recently, Alison invited me to a garden party at her house in Brooklyn. “You can meet my father,” she said. When I arrived, she flourished her arm toward a man in his seventies sitting at another table. He was short, stocky, tan, had pale blue eyes, graying sandy-brown hair, a prominent nose, and drooping eyelids. “What do you think? Does he look like a Lichtblau?” she asked, laughing.

It’s hard to avoid clichés here. He looked so much like my father that I truly cried out in amazement. He could easily have been his brother, a first cousin. “Everything stopped,” Alison said later of the moment.

We shook hands. He apologized for not knowing much about his relatives. He was only five when he left, and his parents didn’t reminisce. But, he remembered something about a smoking-accessories factory. And did the names Heinz and Rudi mean anything? Mimi Knöpfelmacher? Had I heard of her? Yes, she was the daughter of my grandfather’s sister, Juli, my namesake.

After a while, we ran out of lore. Too many pieces were missing. We got tangled up in the generations. My grandfather’s late marriage meant that first cousins could be twenty years apart in age. It was all very confusing. Later at home, I couldn’t place him on my chart. I think his grandmother was a cousin of my grandfather. Only an anthropologist could figure out what the kinship term is for our relationship. But the connection is real. Alison and I are indeed “cousins,” which is delightful. We have blue eyes and something about the jaw. At one point in the party, I watched her father walk up the steps and enter the house. The stoop of his shoulders, the side-to-side movement when he walked were so like my father’s. And he was short, like him. Touched, I asked: “How tall are you?” His daughter burst out laughing.

He said: “Six three.” I’d touched a sore spot already in my long-lost relative. In this, he was unlike my father, who wasn’t sensitive about his height.

So at a garden party in Brooklyn (what’s more Wiener than a garden party?), a piece of the puzzle appeared out of nowhere seemingly, the way lost puzzle pieces do. “Where did this come from?” we say when they turn up. “I’ve been looking for it everywhere.”