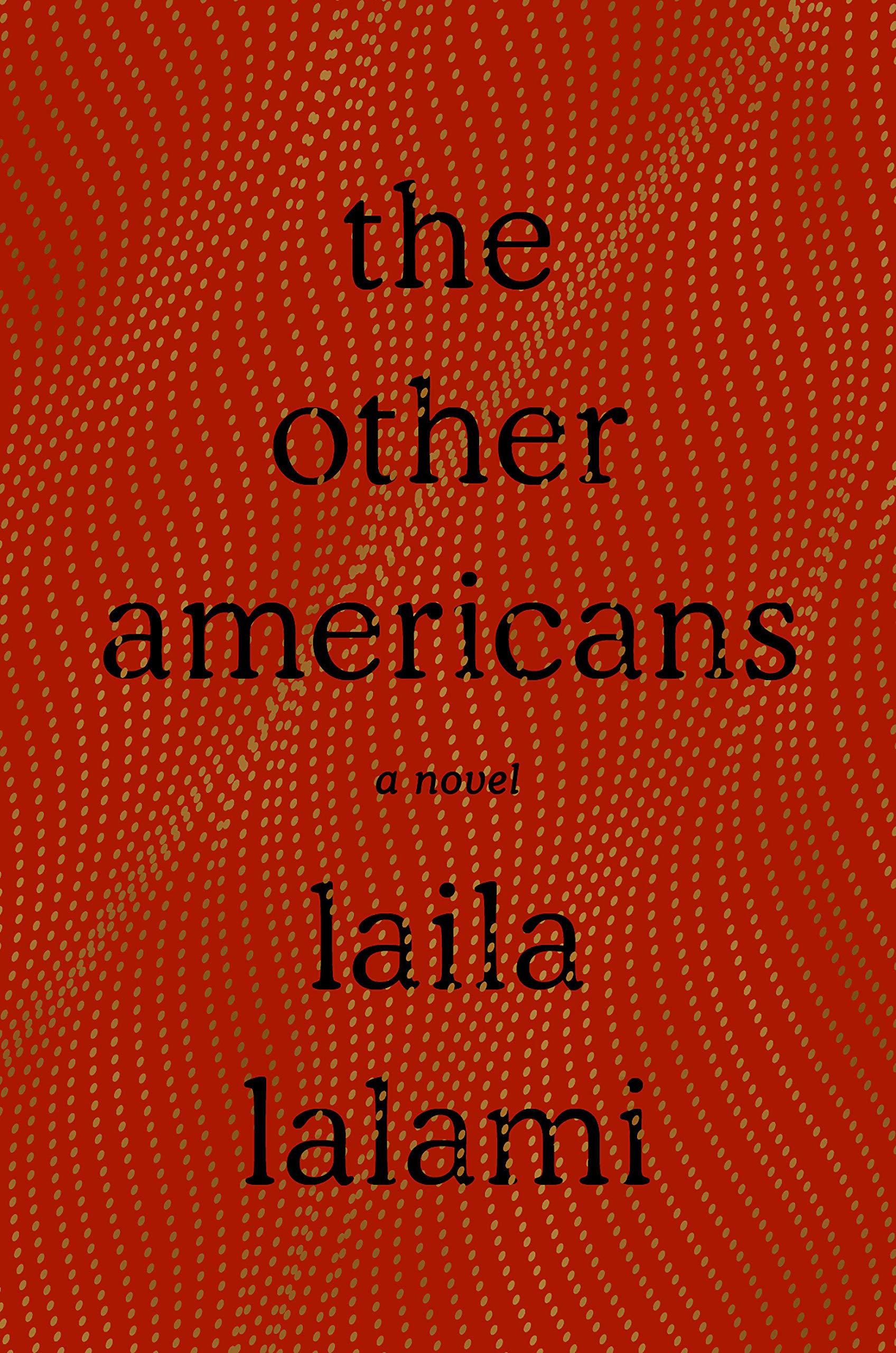 An excerpt from The Other Americans by LAILA LALAMI

My father was killed on a spring night four years ago, while I sat in the corner booth of a new bistro in Oakland. Whenever I think about that moment, these two contradictory images come to me: my father struggling for breath on the cracked asphalt, and me drinking champagne with my roommate, Margo. We were celebrating because Margo had received a grant from the Jerome Foundation to work on a new chamber piece, her second big commission that year. We’d ordered steamed mussels and shared an entrée and lingered late into the night. The waiter was trying to convince us to get the chocolate mousse for dessert when my phone rang.

I have no clear memory of what happened next. I must have told Margo the news. We must have paid the bill, put on our coats, walked the five blocks back to our apartment. A bag was packed, somehow. But I do remember driving home on the 5 freeway, in the foggy darkness that cloaked almond groves and orange orchards, all the while dreaming up alternate explanations: perhaps the sheriff’s department had misidentified the body, or the hospital had swapped my father’s records with someone else’s. These possibilities were far-fetched, I knew, and yet I clung to them as I drove. Under my headlights, I could see only twenty feet ahead. But the fog lifted at dawn, and by the time I reached the Mojave, the sun was out and the sky a brazen blue.

All I could hear when I stepped into my parents’ house were my heels on the travertine floor. There was a copy of Reader’s Digest on the console, a set of keys on a yellow wrist coil, and a pair of sunglasses with a missing lens. One of the framed photos on the hallway wall was askew. In the living room, my mother sat on the sofa, staring at the cordless phone in her hand as though she couldn’t remember how to use it. “Mom,” I called, but she didn’t look up. It was as if she couldn’t hear me. She was still in the white shirt and black gi from her karate class the night before. Across the ottoman, the jacket of her uniform lay in a heap, the dragon appliquéd on its back a startling red.

It seemed to me then that my father was still with us—in the half- empty packet of Marlboros on the windowsill, the frayed slippers under the coffee table, the tooth marks on the pencil that stuck out from the book of crossword puzzles. Any moment now, he would walk in, smelling of coffee and hamburgers, saying, You won’t believe what a customer told me this morning, and then, seeing me standing by the armchair, call out, Nora! When did you get here? His eyes would gleam with delight, he would kiss me on the cheeks, the stubble on his chin would tickle me, and I would say, Now. I just got here now.

But the doorway remained empty, and pain kicked me in the stomach. “I don’t understand,” I said, though what I meant was that I didn’t believe. Disbelief had been the only constant since I’d heard the news. “I just talked to him yesterday.”

My mother stirred, finally. She turned to me, and I saw that her eyes were rimmed with red and her lips cracked. “You talked to him?” she said, not without surprise. “What did he say?”

From the hallway came the rattle of the mailbox slot and the thump of the mail as it hit the floor. In its wicker basket, the cat raised its head, then went back to sleep.

“What did he say?” she asked again.

“Nothing. He said he wanted to chat with me for a bit, but I had to go teach and I wanted to get a cup of coffee in the few minutes I had left on my break. I told him I’d call him back later.” My hand flew to my mouth. I could have talked to him one more time, heard the care in his voice, and yet I had squandered the chance. And all for some bitter coffee in a paper cup, hastily consumed before confronting a class of bored prep-school kids making their way through The Odyssey.

A motorcycle roared up the street and the windows shuddered. Nervously I undid the folding clasp on my watch and clicked it back in place. Then a grim silence fell on the room again. “What was Dad doing at the restaurant so late?” I asked. “Doesn’t Marty usually close up?”

“He wanted to install new lights he bought, so he told Marty to go home.”

And then what? He must have locked up the restaurant and walked out. Maybe he was jiggling his keys in his hands, the way he always did when he was lost in thought, or maybe he was distracted by a text on his cell phone. Either way, he didn’t hear or see the car barreling down on him until it was too late. Had he suffered? Had he called out for help? How long had he lain on the asphalt before his breath ran out? Unbidden, a memory came to me of a summer party at the neighbors’ house when I was four years old. They’d recently remodeled their backyard, and were showing off their new barbecue pit and seating nook to my parents. My sister ditched me; she was ten and wanted to play with the older kids. I started chasing after a pair of dragonflies, but just as my fingers closed around one of them, I fell into the pool. The water was icy and tasted like almonds. It drew me to the bottom with such force that I felt I would never draw another breath again. I was in the pool for only an instant before my father dove in after me, but in that instant my limbs froze, my chest burned, my heart nearly stopped. That pain came back to me now. “Something doesn’t seem right,” I said after a moment. “The one time Dad stays for close, he gets run over and killed?”

I realized too late that I had said the wrong thing, or used the wrong word. My mother began to weep. Loud, unguarded sobs that made her face flush and her shoulders heave. I crossed the living room, moved the rolled-up prayer mat out of the way, and sat beside her, holding her so close that I could feel her tremors. Everything about this moment felt strange to me—being in this house on a weekday in spring, wearing my shoes indoors, even comforting my mother as she cried. In my family, my father was the consoler. It was to him I came first whenever something bad happened to me, whether it was scraping my knee on the monkey bars when I was eight, or losing another composer competition just a month earlier.

My mother wiped her nose with a crumpled tissue. “I knew something was wrong when I came back from your sister’s house. I went there to drop off karate patches for the children, and she asked me to stay for dinner. Then I came home, and he wasn’t here.”

Yet the armchair where my father usually sat still bore the imprint of his body. It was as if he were only in the next room.

“No. The detective just asked a lot of questions. Did he have money troubles, did he use drugs, did he gamble, did he have enemies. Like that. I said no.”

I remember being puzzled by these questions, which were so different from those that swirled around in my head: who was driving the car and how did they hit him and why did they flee the scene? Then my gaze was drawn to the window. Outside, two blackbirds landed one after the other on the electric wire. The neighbor across the street was deflating the giant Easter bunny that had sat for weeks in his front yard, gathering dust. It stared back with grotesque eyes as its white ears collapsed under his shoes. The wind whipped the flag on the pole, and the sun beat down without mercy.

From THE OTHER AMERICANS by Laila Lalami. Copyright © 2019 by Laila Lalami. Reprinted by permission of Pantheon Books, an imprint of the Knopf Doubleday Publishing Group, a division of Penguin Random House LLC.

Laila Lalami was born in Rabat and educated in Morocco, Great Britain and the United States. She is author of the novels Hope and Other Dangerous Pursuits, which was a finalist for the Oregon Book Award; Secret Son, which was on the Orange Prize longlist; and The Moor’s Account, which won the American Book Award, Arab American Book Award and Hurston/Wright Legacy Award, was on the Man Booker Prize longlist and was a finalist for the Pulitzer Prize.

Her essays and opinion pieces have appeared in Harper’s, The Guardian, The New York Times and elsewhere. A recipient of British Council, Fulbright and Guggenheim Fellowships, she teaches creative writing at the University of California, Riverside. Her most recent novel, The Other Americans, was a Los Angeles Times best-seller, a best-of-2019 selection from NPR and Time and a finalist for the National Book Award in Fiction.