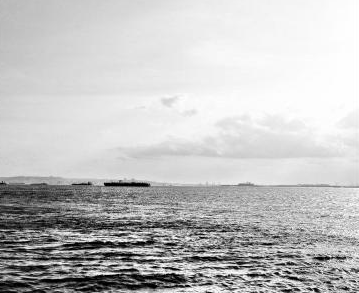 I live a few blocks from a cruise ship terminal. When ships dock there, they tower above the nearby buildings, which top out at four or five stories high. At night, their decks and windows glitter in neat rows, like high-rise apartment buildings, as if downtown Manhattan has suddenly been pulled close. When the ships finally depart, their horns boom dramatically, out of place in my quiet, unassuming neighborhood of Red Hook, Brooklyn.

New York is a city that forgets it is a port. Then a storm like Sandy comes along and we are reminded of the ocean and rivers that form its borders. A few hours before the storm hit, my husband and I gazed out at the New York Bay. We were standing in the kitchen of our upstairs neighbors’ third-floor apartment, trying to decide whether or not to obey the Mayor’s evacuation order. I held our two-and-a-half month old baby in my arms — an obvious reason to leave, our families thought. But when Irene hit last year, we stayed, and ended up faring a lot better than Brooklyn neighborhoods on higher ground, never once losing power.

On the news they were predicting an 11-foot storm surge. As we stared out the window, we tried to wrap our minds around what that would mean, what it would look like. It was unusually windy outside by now, but from a distance the ocean looked calm, blue, unruffled. 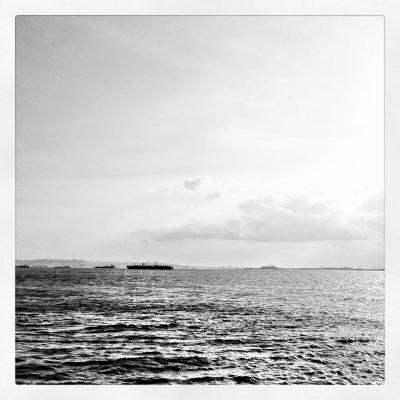 “At least we’ll be able to see it coming,” our neighbor said. “Of course, by then it will be too late to do anything about it.”

We laughed, nervously. I thought of the first line of a poem by Glyn Maxwell: The sea comes in like nothing but the sea. I tried to imagine the bay waters rising and rushing forward across the cruise ship docks; across the enormous parking lot where the tourists arrived, dragging their rolling suitcases; across the cobblestone alley behind our building, where I take my baby for stroller rides; and finally, across the street where I lived. It seemed movie-absurd. But the line echoed in my mind. Nothing but the sea.

A half hour later, my husband and I had packed our bags and strapped the baby into his car seat. It was raining when we left, but there were people out on Van Brunt Street, Red Hook’s main drag. Some were preparing their apartments for the storm by taping their windows and covering basement doors with sandbags. Others were drinking at the bar. I wanted to stay. “If it were just the two of us…” I said to my husband. He nodded without saying anything.

We went to my sister’s apartment, where we followed the storm on TV and on Twitter. By early evening it was clear that the damage was going to be worse than anything we had guessed. For one nail-biting hour, as we waited for high tide, we were even worried that our second-floor apartment would be flooded. “Thank god you left,” my sister said. I nodded, thinking of all the people who had stayed in Red Hook because they had no choice. It would be so terrifying to sit in the dark hearing the waters rise.

The next morning, my husband drove down to check on our apartment and came back with several dozen photos. You could see the waterlines on the buildings — five or six feet above street level in some places. Cars were parked randomly and crookedly in the streets, having floated several yards from their original spots. For me, one of the saddest photos was of a fallen willow tree a few blocks from our apartment. Red Hook doesn’t have a lot of trees and this willow was one of the older, bigger specimens. In the summer, its trailing branches form a vale of green, transforming an empty fenced-in lot into something beautiful.

Later that day, I got to see the damage first hand. By then, the clean-up had begun, with a crew chopping the willow tree into manageable pieces for hauling. The sidewalks were busy with residents and business owners in the process of moving their soaked belongings and merchandise into cars and vans. Generators hummed, pumping water out of basements and spewing it into the gutters. The whole neighborhood reeked of gasoline and the sidewalks shone with oil rainbows.

One of the charms of Red Hook is that it rarely feels busy, but on the day after Sandy it was swarming with reporters and photographers. It was those visitors, more than anything, that made me realize how bad things were — like when you go to visit someone in the hospital and the doctors keep coming in and out, bringing in residents and medical students.

I walked down to the edge of the bay, where you can see the Statue of Liberty. The water was gray and the wind gusting off it was cold. It almost felt like snow. I remembered how Irene, which hit in late August, had blown away what was left of summer and ushered in fall. This year, it seemed, Sandy had brought winter.

In the car, on the way back to my sister’s, where we would stay before moving on to the apartments of other friends and relatives (we’re still not back home), we listened to the radio. The Mayor said that New York would “come back” from disaster. Maybe so, I thought, but the sea would come back too.

Hannah Gersen is the Dispatches Editor for The Common.

Fire of Love: A Review

HANNAH GERSEN
You don’t expect a documentary about volcanos to begin in freezing temperatures, but in the first scenes of Sara Dosa’s enthralling new feature, Fire of Love, married volcanologists Katia and Maurice Krafft struggle to free a jeep mired in icy slush. Farther down the road is a fiery pool of molten lava.