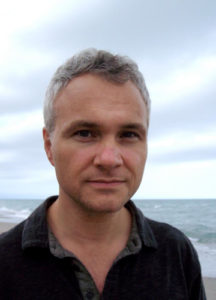 Joshua Mehigan, whose poems “How Strange, How Sweet” and “Believe It” appear in Issue 06 of The Common, was born and raised in upstate New York. His poems have been published in a variety of journals and magazines, including Poetry Magazine, Ploughshares, The New Republic, Parnassus: Poetry in Review, and The New York Times. His most recent book, The Optimist, was published in 2004 by the Ohio University Press and was a finalist for the Los Angeles Times Book Prive. His second book, Accepting the Disaster, is forthcoming in July 2014 from Farrar, Straus and Giroux.  He currently lives in Brooklyn, New York. The exchange below took place over email while Winter Storm Janus snarled the streets of New York City. 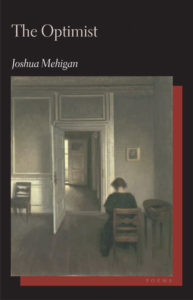 S. Tremaine Nelson (SN): Is there anything that poetry “must” do? If so, what?

Joshua Mehigan (JM): I could say I probably want what most people want from poetry. I want a consequential experience with meaningfully arranged language. But I also have many idiosyncratic personal “musts” that even I don’t understand completely. And I like different things. One poem I love, probably by Thomas Wyatt, goes:

I think this is consequential. But so are “The Day Lady Died” and The Odyssey, for instance, or “’Tis not the Dying hurts us so—,” or “Whitey on the Moon.” The poems that matter to me rattle me emotionally or imaginatively, or amplify an idea I value, or do just the opposite and mess with my worldview. I want mind-altering experiences with poetry, so my favorite poems tend to stop me dead.

“Arranged language” isn’t code for meter and rhyme, as someone might infer from my poems. Meter and rhyme are indispensable to me, but poets use lots of compositional methods in ways that prove their necessity: versification, rhetoric and phrasing, metaphor, alliteration, typography, etc. None precludes the others. They’ve all helped poets like Wyatt, O’Hara, and the rest get the kinds of compression that define the art.

SN: Your poem “Believe It” is only eight lines, is devastating, and appears in Issue No. 06 of The Common. Is it about death?

JM: Thank you. Yes, it is about death. In fact, I was thinking about an actual death, of someone unhappy, greedy, and nasty his whole life, who was supposed to die. He got better—this time. I have no wish for anyone to die, but some people can’t appreciate the opportunity that imminent death has given them for serious introspection. In cases like that, you have to be introspective for them.

SN: How do you find a balance between the visual and sonic elements of poetry? Should a good poem please both the ear and eye?

JM: I like poems that take care with both. Various combinations can work, but I like some moderation. One of the first poems I loved was “Oranges,” by Gary Soto, which is plainspoken but visually vivid. I like plainspoken, vivid poems: Clare, Borges, Justice. I prefer that to abstraction in vivid language. But I don’t like poems to flatten out or strain too much anyway, at least not artlessly. The Modernists were sick of Swinburne, et al., and I sympathize. But artists are extreme, and before long The Image was an idée fixe, and the writing became plainer and plainer, then flat. When I started, the recipe was Lavish Metaphor + Nondescript Language. That got me curious about sound, and also about the wisdom of burdening every other line with an image meant to catapult the reader into the empyrean. But it’s not either-or. Poets with a factional turn of mind could learn something from watching Trading Spouses, where each week two new aggressively immoderate families learn an important lesson—the lesson of the middle way.

SN: Does poetry still have the power to change the way people think?

JM: Last week I went to an event for Liu Xia, a poet under house arrest in Beijing. Her husband is the Nobel laureate Liu Xiaobo, who’s serving 11 years in prison. Both are detained precisely because poetry still changes people’s thinking. That event also said something to me about poetry in the US. Liu Xia’s friend broke down onstage while reading the poet’s work. I last saw sobbing at a reading in 1993, and that was a poet moved by her own break-up poem. But even in the US, where people are more often tyrannized by their own appetites, poetry can at least change the thinking of those who read it, and that’s hundreds of thousands, or hundreds of millions, depending on definitions. The questions are really: What are poets saying? And how much influence do they have, relative to One Direction or Grand Theft Auto V, or to whatever pacifies people where poetry gets you jail time? These examples come from the social sphere, but obviously poetry changes thinking in other ways, too.

SN: Could you tell us a little about your favorite dead writers from previous centuries?

JM: I keep the poetry books that mean the most to me on a shelf by my desk: Wyatt, Shakespeare, Wordsworth, Clare, Tennyson, Dickinson, Stevens, Muir, Borges, Auden, Gwendolyn Brooks, Larkin, Edgar Bowers. Also, lots of my favorite poems are by other poets. A parallel bunch of prose writers would include Orwell, Twain, Dreiser, Stephen Crane, Dickens, Melville, Chandler, Dostoevsky, Betty Smith, Yates,Valéry, Faulkner, Hardy, Flannery O’Connor, and Santayana for his novel, The Last Puritan.

SN: Your Wikipedia page describes a previous job title of yours as “communications professional.” Could you elaborate on this?

JM: I worked in communications jobs for 15 years, producing publications for marketing, development, and publicity departments. It seemed like a natural line of work for a writer, but it wasn’t natural for me. 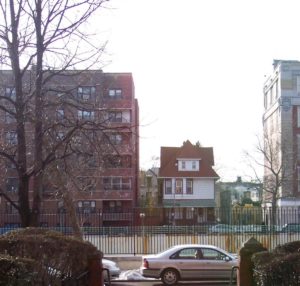 SN: How has New York City influenced your art?

JM: It provides lots of material. (See “How Strange, How Sweet,” in The Common 06.) Many of my poems happen in a sort of emblematic American town. I first moved to New York City in 1992, soon after I started writing seriously, but never knew how to write about it. My poems often start with some personal trouble over my environment. I grew up in a small town—which has been a bottomless resource. It took time to feel that way about the city, which represented escape. I still love it tremendously. But there’s inexhaustible trouble here, and after two decades I feel less like a tourist.

There’s also a lot here for poets to do. There’s a poetry scene, but much more important are the thousand places that are of special interest to writers. Some are obvious, like the 92nd Street Y, PEN, or the libraries, and some less so, like St. Mark’s Bookshop, or Community Bookstore and Book Court in Brooklyn. Of course there’s a lot of literary history, and also living writers reading onstage. I also love the Met, Film Forum, and Central Park, where I got married.

SN: Are your best friends also writers and poets, or do you find it better to socialize “outside” your artistic circle?

JM: Many of my friends are writers, but some aren’t, especially my oldest friends. I’m still friends with my best childhood friend, and he doesn’t care anything about poetry. But he’s very decent to ask about what I’ve published lately. It’s obviously important to have friends who can talk about poetry, but it’s also good not to have a literary perspective on everything.

JM: I love seeing my poems translated. It’s also unnerving. Christophe Fricker, who translates my poems into German, is brilliant, accomplished, and uses analogous lines and rhyme. I receive the German periodicals in which his versions appear, and then I unwrap them and stare at them, not knowing what else I should do. But, that whole business aside, I’m absolutely certain I couldn’t ask for a better translator. I’m lucky. There are good translations being made, but a lot of current translations into English worry me. Some are too hard to assess, some are flat or overdone in English, and some are obviously really irresponsible. But I do try out a fair number, and I try to learn something about them first.

SN: How must young poets respond to “mash ups” and other newly evolving art forms? What is your own relationship to these forms?

JM: I’m all for new things, if they’re not done only because they’re new. But then mash-ups would seem to have been around for a long time. I was inordinately happy, in 1991, to find out that you could sing many Emily Dickinson poems to “The Battle Hymn of the Republic” or “The Ballad of Gilligan’s Isle.” People have been writing centos for millennia. In my first book, I have a poem made of dumb news headlines that happened to be iambic pentameters, only I didn’t know it could be called a mash-up when I wrote it. I guess the Internet makes it easier to propagate this stuff. There is probably more badness to drive out the good, but anything is good when it’s good.

Joshua Mehigan‘s poems “How Strange, How Sweet” and “Believe It” appear in Issue 06 of The Common.

ShareTweetEmailPrint
2014 Interviews Joshua Mehigan S. Tremaine Nelson
On Balancing the Visual and the Sonic: An Interview with Joshua Mehigan02.04.2014