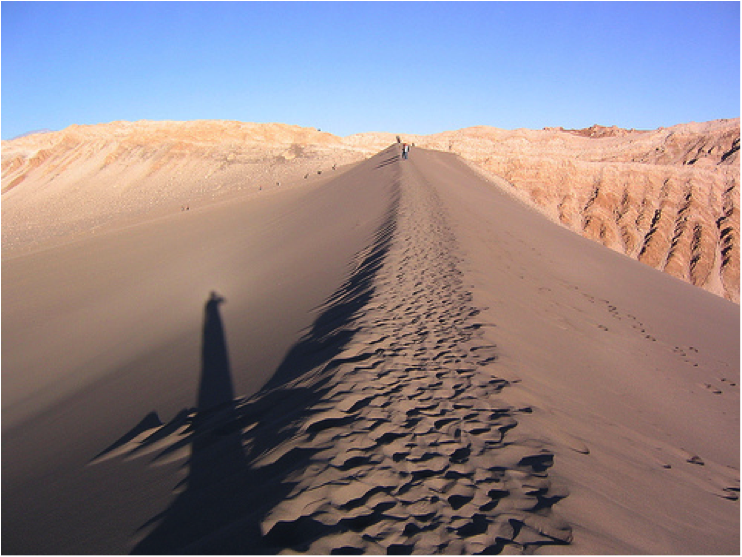 Six months ago, Paul Salopek walked out of Herto Bouri, Ethiopia, heading northwest across the parched expanse of the Great Rift Valley.  He will be walking for the next seven years.

Salopek, a Pulitzer Prize winning journalist, is tracing the pathway of human migration, from our species’ birthplace in Africa to the gale-swept tip of South America. His Out of Eden Walk magnifies more than the sheer geographical scope of our planet—it breaks with 21st century travel’s grand promise: speed.

Salopek’s walk marks a return to what he calls “slow journalism,” or the art of traveling at the pace of human footsteps. But his journey also embraces the other defining facet of modern travel: the compulsive communication. Salopek will, after all, be live tweeting during his walk around the world.

“At least the moon remains familiar. It rose like an amber pendant above the ivory plain. The thornscrub throws hard shadows.”

In 140 characters, Salopek reminds us that even in the far reaches of our planet there are familiar fragments; what better way to express oneself than in modern travel writing’s version of poetry.

With “Last Morning in Al Hamra,” the first winner of the Shiva Naipaul Memorial Prize, Hilary Mantel overturns the standard travel narrative about a privileged cultural interaction. She writes as an expat living in Saudi Arabia, where a woman’s education is an ornament to be hanged in the kitchen, where there is no crime, the newspapers say, nor corruption. In this unlikely place Mantel found irreconcilable cultural differences that as a world traveler she thought she could overcome. She writes:

“When I travelled at first I used to ask what I could get out of it, and what I could give back. What could I teach, and what could I learn? I saw the world as some sort of exchange scheme for my ideals, but the world deserves better than this. When you come across an alien culture you must not automatically respect it. You must sometimes pay it the complement of hating it.”

Fortunately, for Christopher Soloman, there’s a solution to the  “trampling hordes” he so dislikes that often swarm today’s popular tourist destinations. In his New York Times essay “A Case For Getting Far, Far Away,” Soloman describes his affinity for the white spaces on a map.

After tramping through places like Aniakchak National Monument Reserve, a sliver of Alaskan wilderness where just 19 people visited last year, Soloman has devised his own travel maxim. A trip, he writes, “is memorable in inverse proportion to the number of bars of coverage on your cellphone.”

For Soloman, travel to America’s remaining forgotten corners, from Freezeout Ridge to Burnt Boot Creek, is proof that even on a crowded planet it’s still startlingly easy to vanish—if you know where to go. It’s a reminder too that although the distances between people and places have shrunk, much of the planet remains unknown.

Standing on a patch of the Arabian Desert, as Salopek writes in this National Geographic article, he is reminded that the world’s first travelers had no maps. Get lost, he says, because “the people who discovered the world were going nowhere.”

The New Yorker, “The Grand Tour: Europe on fifteen yuan a day,” by Evan Osnos

A. NATASHA JOUKOVSKY
There is something post-decadent about Versailles in winter. The fountains are off; there are not many tourists. Everything is still fiercely geometric and over-the-top, but in this gray, expired kind of way, at least most of the day; the crisp chill of nighttime being an exception.

As I Live and Breathe

ELIZA BREWER
It was mid August when my mom and I made the trek into South Central Houston to visit Sidney. We wound through the dense medical district towards the massive complex of 5 buildings making up MD Anderson Cancer Center where Sidney was being treated.

JEFF PARKER
Times like these set one to worry. Far down the list of immediate worries, well beyond concerns about mask filters and how far exactly is six feet and decapitated tomatoes and crooked fences, lurks that ever-present concern, Does literature matter?