We lived in a half-built villa by the sea. It was terrifically gaudy, and the most breathtaking place any of us had ever lived. The two long walls of the rectangular main room rose only to knee height and from there became screen-less windows, which could be closed by winding down shutters. We left them open day and night. To the west we could see the vast cobalt blue of the Indian Ocean all the way to the heat-white horizon, and to the east, Reunion Island rising in boxy pastel-colored buildings and palms to its foggy volcanoes and peaks. 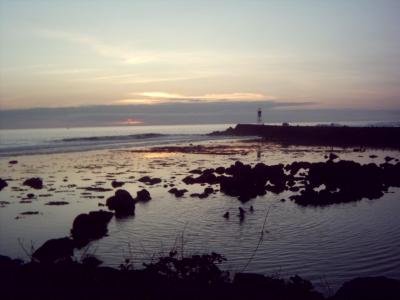 On the walls of this main room were frescoes of white-skinned belles with oozing breasts and hips, dresses slipping off their shoulders, bathing or frolicking, in a wood dotted with Roman ruins and columns. The bedroom frescoes featured gallant parties beside streams; balloons; women in frilly pastel summer dresses on blankets, holding parasols. All of this was conceived by the egomaniacal mind of Jean-Jacques, a Frenchman with a Réunionnais wife and a ten-year-old daughter for whom Villa Morgane was named. Jean-Jacques was writing the history of the world in the villa behind ours. Once, he yelled at Drew for leaving a pair of jeans drying on the balcony. “You have no class!” he shouted, while below him, beside the pool, stone figures intertwined in Kama Sutra poses and fat Cambodian Buddhas graced fake waterfalls. Morgane, her face a burnished jewel, once warned Elizabeth and me of the dangers of too much Chantilly: French cream whipped with vanilla and sugar, from the eponymous city that also gave its name to lace. Morgane and her mother both had slim, tanned bodies; large blue eyes; and a hardness, pragmatic and cool, which understood that a woman’s role was first and foremost aesthetic. They seemed immune to their own beauty, saw it strictly in terms of la ligne: a French concept referring to the line of a woman’s body, a singular and rigorous geometry that demanded sacrifice. We—Elizabeth and I—understood the rigors of maintaining la ligne, but were not so indurate to the power of our bodies, to the pull of our surroundings. We indulged in Chantilly, a frilly white swirl on bright fruit. Bought at the charmless Géant supermarket, it did not inherently possess any more grace or magic than a can of Reddi Whip, but in that open room on that island, suspended between stages of our lives, a bowl of mango with Chantilly engraved itself into memory as a moment consciously lived.

I paid 100 Euros less than Drew and Elizabeth to live behind two rickety bamboo walls in the main room, the couch as my bed. I slept each night under a heavy wet sky—the ocean murmuring just beyond the window like a visiting friend in a nearby bed—listening to the Creole men break bottles on the corner. Zoreilles, they called us when they were drunk, mademoiselles when they were not. Zoreille is a Creole term meaning “ear” and refers to the French colonials who would cock their ears to try and pick up any hints of rebellion among their Malagasy, Tamil, Chinese, and East African slaves and indentured servants. Many of these workers successfully escaped, establishing tiny, remote settlements in Reunion’s dense forests and mountains.

In the fall, although there were no clear seasons on this island 500 miles east of Madagascar in the South Indian Ocean, I backpacked through a number of these small settlements with a cocksure but quiet Frenchman named David who taught parasailing in the village of St. Louis. He was ­­in a relationship with a girl who both fawned over and bored him (“She’s beautiful,” he shrugged, in a way that made me brood with loathing and envy), and I was in the final throes of a silly and slow-dying love affair with a graduate student ten years older than me, whom I had lived with, left, and then longed for in a steady exchange of pining and ill-advised letters. One morning in Cilaos, I stepped out of my tent to see the moon hanging like a bell above the darkened mountains, in the haunted blue of the dawn. The village lay below it, pieces of scrubbed white shell. David was sleeping in his tent, and I was alone, and the world seemed suspended.

Elizabeth and I were on Reunion as assistantes d’anglais on behalf of the French Ministry of Education. We’d been best friends in college, but when I first arrived on Reunion our friendship was tense and fragile. I’d come from eight months in South America, traveling solo, and she from a villa on the other side of the island, where she’d been living with a group of French artists. We were each trying out nascent identities, getting our bearings in the world. We were poor, uncertain, happy, brooding, tentative, aimless, curious and afloat. When she found the villa, we asked Drew, a fellow teacher, to live with us since we couldn’t afford the rent on our own. Drew went on solo explorations, and Elizabeth and I gradually grew closer, like planets drawn together in orbit. Each night, we cooked. We squeezed limes and oranges over fresh swordfish bought from the stand by the beach; we made curry with spices—vanilla, cinnamon, ginger, masala and cloves —from the dark markets in St. Pierre; we prepared rhum arrangé, anticipating with the glug-glug-glug of the rum over pineapple and sugar cane the sweet distillation we’d sip months later.  I had never seen vanilla before, was surprised that it was tough, spindly, and cocoa-brown. We baked date bars, boiling and mashing the dates on long white afternoons, talking and not talking. The smells drifted out the open windows and mixed with salt, warmth. In that apartment there was always a breeze, we were always bare-legged and barefoot. 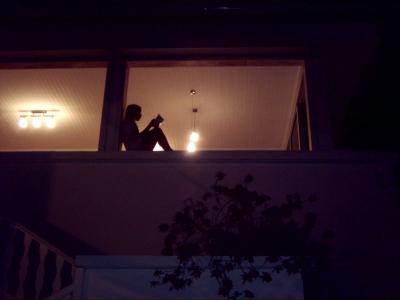 Elizabeth was tall, slim, golden brown, beautiful, and had many lovers. I had the sense that her beauty had won us our precarious, discounted place in Jean-Jacques’ half-built villa. I was petite, blonde, freckled, and longing for someone far away and inaccessible. Extricating myself from him was like pulling near-invisible strands of silk from a sticky seed.

At night we drank bière a la peche at a tiny bar with a few tables and stools, where French hipsters gathered. Sometimes we went dancing, but mostly we went to bed by eight or nine, and at five I woke and ran on the beach. The South Indian Sea at dawn was blue and blue and blue. Old men and women bobbed in the sea, then did calisthenics on the shore. Sometimes they cheered me on. I ran to the roasted chicken stand on the shorefront road and turned back, crunching over washed-up coral, and by the time I was home the blue had been chased off by soft, yolky orange and the old men were under the baobabs, playing chess.

I remember landing one night in a tiny plane after a trip to South Africa and seeing the island’s wall of black mountains rear up from the shore, garlanded by a smattering of gold lights and the rough beard of the cane fields. I remember feeling relieved not to have come home, but to have come back to a home, a mini-life within my life. Later, an epidemic of the crippling, mosquito-borne disease Chikungunya would sweep the island. Men in astronaut-like white suits sprayed the streets. Our Spanish friend fell sick and warned us to go. We wound down the villa’s shutters, sweated in the enclosed heat, cried out in real panic when we heard the whine of a mosquito.

Elizabeth began a relationship with a French man who, like most men, loved her more than she loved him. I got an email from the graduate student declaring, with his trademark heaviness and repressed longing, that he had fallen in love with someone else and had been waiting to find a way to tell me. It was Elizabeth who sat with me at night while I alternately laughed and sobbed into one of our teensy French glasses of rum and pineapple juice. We talked about the people who for some inexplicable reason became associated with longing and whom we might never be able to get out of our heads. We lay on the quiet beaches with the sun on our bare bellies. Eventually, I left.

It was one life among many, seemingly impossible now; life has grown narrower, one decision after another steering me onto a straighter and more singular path. The abandon I felt then, the ambiguity, the afternoons spent boiling down dates into thick threaded honey, the 5 a.m. runs gone orange at their ends, the beauty and vanity, the pointless longing. Now life would have to have aims, and I would have to have goals. Each day would be sharper, pointing towards the next. I am married now, with a career, and plans, and ambition. Travel is no longer so contained as an island: I can rarely be that apart from the world and that lone in it. I haven’t seen Elizabeth in four years. I wonder if Jean-Jacques finished the history of the world, and if Morgane has ever gorged herself on Chantilly. I doubt it. She was too cautious with beauty, and we found that a sweet mound of cream melts so fast in the tropics.

Sarah Menkedick is a writing instructor and an MFA student at the University of Pittsburgh and the founder of Velamag.com, an online magazine of creative nonfiction inspired by travel and written by women. Her work has been published on Amazon’s Kindle Singles, World Hum, Perceptive Travel, qarrtsiluni, and a number of other online and print publications. She is currently at work on a book of narrative nonfiction about return migration and the annual village fiestas in Oaxaca’s Sierra Norte.