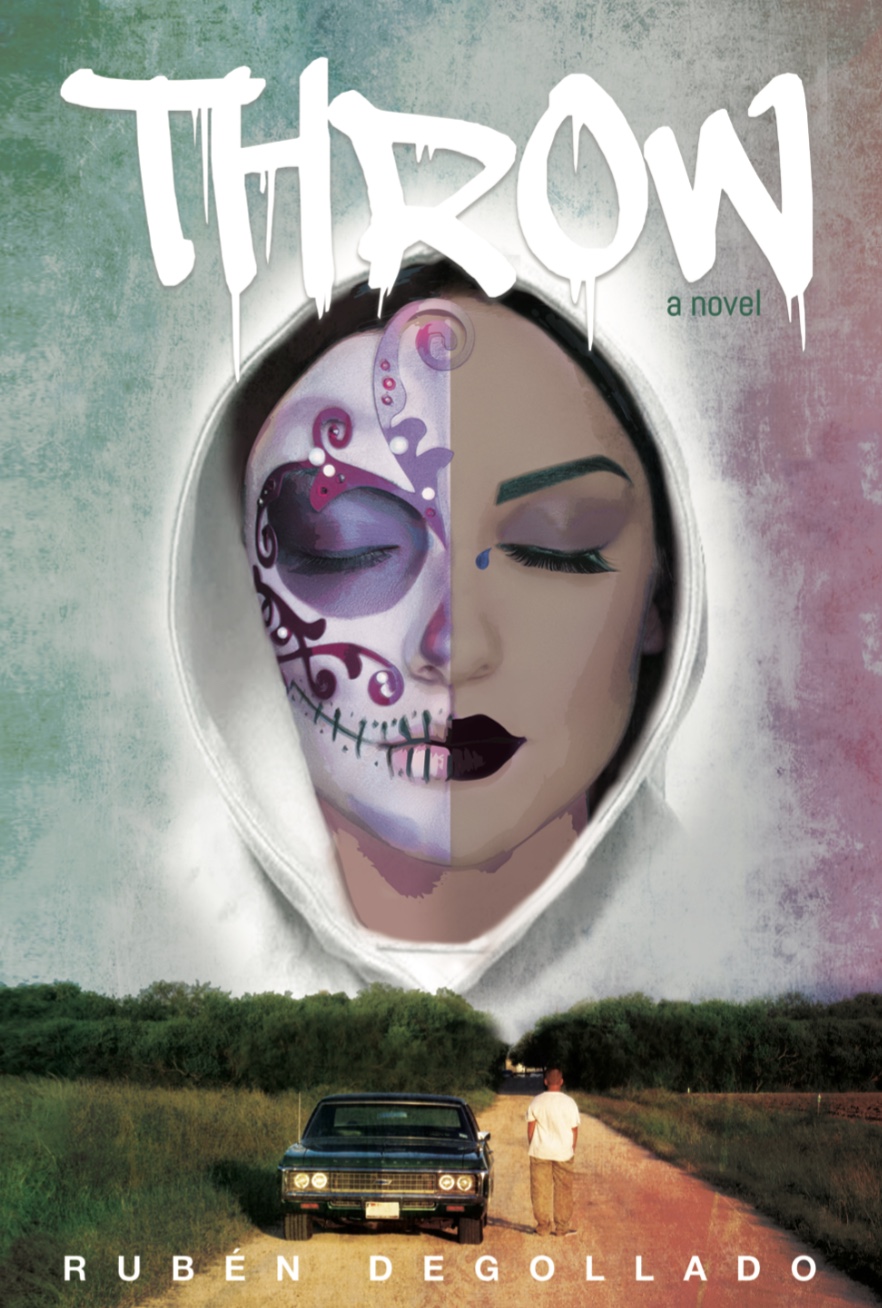 Beneath the outward activity of adolescent life, though, is the deep solitary space of sorting-things-out and seeing-what-is. In high school we hover like spirits at the borders of groups and gathering places, ways of belonging and being. Eventually, we settle in. We embody whatever identity we’ve chosen, or allowed to be chosen for us, and onward marches life.

Before the settling, in that lonely hovering place of Who will I be?, is a tension ripe for story. Rubén Degollado’s thoughtful debut novel, Throw—set just north of the U.S.-Mexico border, near McAllen, Texas—lives in that tension. When we meet our narrator, Cirilo Izquierdo, he is hovering between two years of his life, two names, two sorts of family, and two conflicting impulses toward a young woman he can’t forget.

Cirilo is the name given by his parents, whose choices have played a part in their son’s aloneness. His father, once an “old school gangster,” long ago left his barrio neighborhood for a more comfortable life. He sends his son to a private elementary school, they live in a “nice house hidden by mesquite trees” outside town, but Cirilo calls it a “barrio of three”; his parents drink too much and notice too little. When they switch him to public school to “learn about the real world,” he meets the young men who become his closest friends: Ángel, Smiley, and other members of a local gang called Hispanics Causing Panic (HCP). They call him Güero (in reference to his light complexion), a nickname he goes by for most of the book. These boys are his chosen family, the kind of friends “who had your back no matter what and weren’t too busy with their own lives.” Even here, however, Güero dwells in the in-between: his most trusted friends are HCP, but he refuses to become an initiated member. He shares his father’s conviction that those who fight should fight alone; only cowards need a pack of friends to pile on.

In the midst of all this, Güero has an even more pressing problem: his ex-girlfriend Karina, also known as Llorona after the Mexican legend of the Weeping Woman, a ghost cursed to forever walk the Rio Grande. Like her legendary namesake, the teenage Llorona dwells somewhere between life and death. She wears “two dagger thin horns of hair, cuernitos pointing toward her demonia smile,” blue makeup tears drawn on her face. In Güero’s words:

All the same, Güero still deeply loves her. He knows a side of Llorona that she keeps hidden from the rest of the world, including a secret she’s entrusted to him alone.

Degollado sets up these circumstances—Güero’s yearning for and aversion to Llorona; his conflicted allegiance to his HCP friends amid his father’s contempt for the gang lifestyle—like crisscrossing lines of dominos. Then, with one chance encounter at the beginning of the novel, he sets off the chain reaction that knocks them all down. Three days of rapidly escalating rivalries and violence force Güero to choose on which side he stands in each of these personal borderlands. The consequences will extend to an entire community.

The La Llorona legend is just one of a hundred ways that Degollado infuses Throw with the soul of its setting. Surely every high school has its social hierarchy, but the one at Dennett High School bears the particular stamp of its geography. Gladis, for example, a recent immigrant who speaks “real Mexican from Mexico Spanish”—as opposed to (in Güero’s words) “the Tex-Mex Pocho Mocho Spanish we used with English and Spanish thrown in together”—is mocked by “girls just as brown as Gladis, the only difference being they were Mexicans born on this side of the border.”

On the other hand, Rigo, an HCP wannabe who is “always throwing the signs, trying to get all the attention,” is mocked for not speaking Spanish well enough, with one character snapping at him:

“Y tu, Almond Joy? Nobody asked you, fool. ‘Che metiche Hispanglo from hell. Oh wait, I’m sorry. I didn’t mean to be rude speaking Spanish in front of you. Pues let me translate for you. ‘Che metiche, as in someone who sticks his nose in everybody’s business.”

But categories are complicated. Both Güero and Rigo are Mexican-American, but Güero considers himself Rigo’s opposite: “white on the outside, brown on the inside.”

Then there’s Maribel, who is half-Anglo, half-Mexican, “a born-again prep.” Despite the fact that she pronounces his name “like Where-o, like the gringos did,” she gains Güero’s respect for the kindness she shows to everyone, regardless of social group. When he ponders her affluent neighborhood, he realizes that “if I wanted to, I could belong in a place like this, that I could wear the right clothes, have the same haircut, drop the Spanish from my vocabulary….” But Güero’s ambivalence is clear: language is a marker of identity.

It feels like a nod of respect, then, from Degollado to his characters, to let them speak as they speak, without feeling compelled to explain themselves to some imagined outside audience. It’s an act of respect to the reader, too: whether or not we speak Spanish, the writer allows us to come into this space and just listen. The few times phrases are translated—where the meaning of a line is key to the emotional weight of a scene—feel like a quiet act of hospitality, rather than a compulsory concession to an English-only audience. The result is a prose style that is not only confident and honest, but full of music, crisp with energy, and particularly pleasurable to read. From the opening “If I’m going to tell you the story…,” we have the sense that Güero is confiding in us, and his voice leaps off the page.

Degollado, who has worked as a teacher, principal, and district administrator, has said he aimed to write “a modern Chicano Outsiders,” a novel that would speak to his young Latinx students. But Throw has as much to offer to adult readers of literary fiction. Güero and his friends have agency and emotional complexity; in other words, they’re accorded the same dignity and nuance that adult characters receive in good fiction. Degollado also resists the tropes of the “troubled teen” narrative, wherein an idealistic teacher labors to win over students’ hearts, then gets the narrative glory for setting them on the right path. The adults with the greatest influence on Güero are the ones who show him and his friends affection and respect. Among the most memorable is Ángel and Smiley’s Uncle Benny, whose lengthy goodbyes include instructions like “Órale pues, you all be good, Jesus loves you, don’t smoke weed, don’t drink, and treat the girls with respect.” All the same, Güero says, “it never seemed like he was preaching at me. He just cared and didn’t want us to make the same mistakes he had.” Güero’s self-aware reflections throughout the book ward off any hint of teenage melodrama. Scenes at a mall or a motel party give way to keen observations on class, culture, and the distribution of opportunity.

Güero does a good deal of spiritual questioning, too, which feels appropriate for both a pensive adolescent and the South Texas setting. Degollado paints the region’s spiritual influences with particular vibrancy—brujería (witchcraft) and curanderas (spiritual healers) existing alongside devotion to Jesús, la Virgen de Guadalupe, and the traditions of Mexican-American Catholicism. These form the backdrop for Güero’s own deliberations. He starts out believing his ex-girlfriend has the power to cast the Mal de Ojo, the evil eye, and eventually begins to critique the idea that human beings are captive to curses. While his summer school teacher lectures on Romeo and Juliet, Güero silently ponders questions of human agency vs. the dictates of the stars. The conclusions he reaches will affect a life-and-death choice he faces that very night. Degollado so beautifully combines action with contemplation that these questions of the spirit feel right at home.

Look deeply into the whirlwind of action in Throw, and you will find a novel that not only follows a contemplative character, but also invites us into deeper contemplation. Sometimes, as in life, that invitation comes at the unlikeliest moments. It may be a tossed-off observation—in a burger joint, for example, when Güero observes of his friends: “Ángel could never stop saying mean things, and Smiley could never be quiet. It was like they were both afraid of silence.” In these days of filling our idle moments with phone-scrolling, perhaps we can recognize a bit of that same fear in ourselves.

Sometimes the invitation is more explicit, as in the words of Güero’s friend Maribel:

“Hear [a person’s] words and don’t think about what you think they are going to say next, or study their faces to respond with what you think you want them to hear…. Just listen without pretending to listen, listen without putting yourself into the person’s words. It is a gift you give others instead of just keeping it for yourself.”

Contemplation begins with the choice to simply be with what is, to sit with it attentively without rushing to change it or make it fit our current understanding of the world. For a cultural moment ablaze with political rhetoric and knee-jerk tweets—especially about the U.S.-Mexico border, and the South Texas communities that Degollado knows so well—a novel like Throw deserves our ear.

June Gervais is the author of the novel Jobs for Girls with Artistic Flair (Pamela Dorman Books, June 2022). Her essays and reviews have appeared in The Missouri Review, Cordella, Sojourners, Consequence Magazine, Image Journal, and elsewhere. She blogs at junegervais.com..