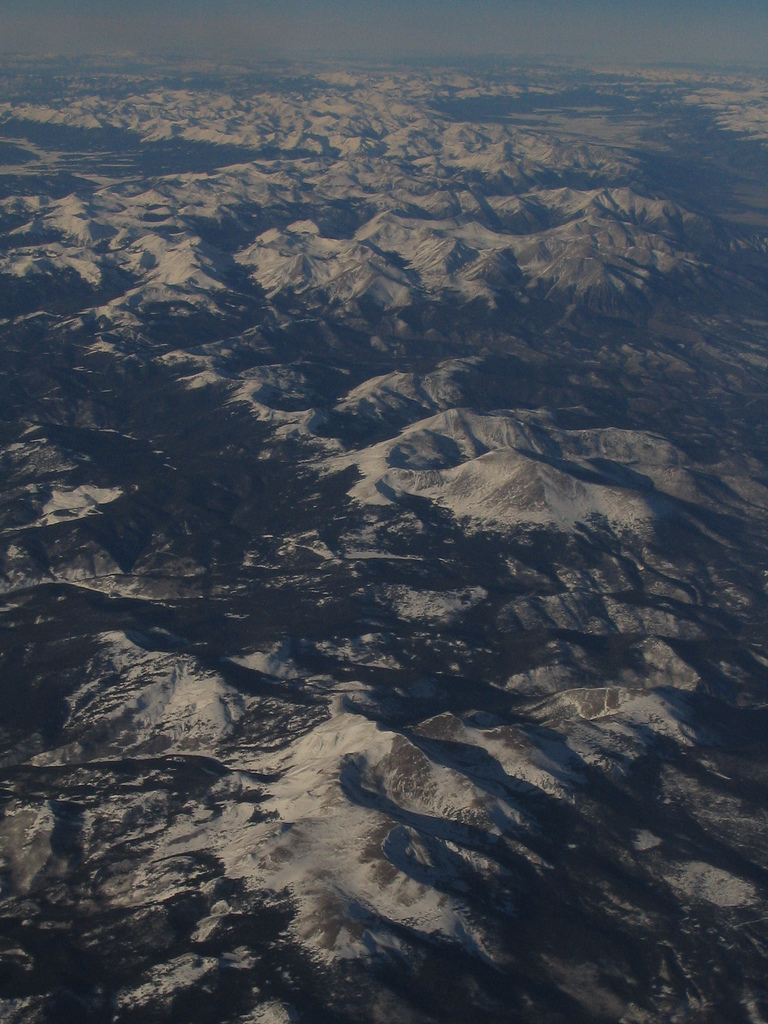 I’d been backpacking solo for twenty days in the mountains of Colorado, only a biography of Mozart for company, when my feet finally got the message up to my thumb that they were tired—so blistered, and achy, and sun-deprived and tired. My thumb, being a crafty little digit, waited until the trail crossed a road, then sprang into action with all the springiness a thumb can muster. One minute I was a resolved nature pilgrim, the next a common drifter hitching a ride to junk food.

What pulled up beside me almost instantaneously was not so much a Suburban as a rumbling patchwork of rust and mismatched panels. The tailpipe, or the little left of it, screamed a warning of danger, but its cries fell on my feet’s deaf ears. I stepped to the lowered window, thinking of ice cream and nothing besides ice cream.

A grizzled man between the age of, say, twenty-five and sixty, with a voice probably twice as old, spoke through a cloud of smoke: “Don’t mind if I smoke, do you?” I took a moment to consult with Mozart, responded that it was fine by us, and got in. My chauffeur was shirtless and exceedingly wiry, tanned to a hue and texture reminiscent of the beef jerky I’d eaten for lunch. A wolf tattooed in blue ink snarled at me from his right bicep.

“I really appreciate the ride,” I said, searching for a safety belt that did not exist. The Wolfman started to speak but his response got lost in a lengthy hacking session. It soon became apparent that the fuming pipe in his hand—the hand that he also shifted, steered, and adjusted the radio with—was not filled with tobacco but something green that smelled of Mephitis mephitis, the striped skunk. “I’m heading into town to get some more,” he said, broken glass and barbed wire in his throat. “I’m a miner”—I could’ve sworn he said sinner—“and I spend a week or two at a time working my claim on the mountain.” He paused to spit a brown gob out the window. “You wouldn’t believe it by looking at me, but I got a Benz in the shop.”

I said that he was right, I did not believe, which made him laugh, which made him cough. “For real,” he said. “I’m a millionaire.” I could hear Mozart snickering from inside my pack. “A millionaire,” he repeated, tossing in a few curse words for emphasis.

The Wolfman and I cruised aimlessly for an hour, poking up random driveways in search of nice views, the Suburban breaking down for a short while in front of a McMansion. The story went that a year ago he’d been prying at a seam in an alpine crag with a huge steel bar when out popped North America’s largest aquamarine specimen. Actually, the popping took three days and nights of hard work, to which the muscle beneath the wolf tattoo attested. The way he talked about the gem made me think he hadn’t been around women in a while—maybe he was in fact a mountain-dwelling mine-hermit, lusty for precious stones? As for his tax bracket, that was none of my business.

When we parted ways at a gas station an hour before sunset, I thanked him, to which he hacked and spat. It might have been a lonely three weeks on the trail talking, but the Wolfman struck me as one of the kindest fellows I’d met in years of travelling. In his knowledge of the high mountains and his commitment to vigorous physical labor, not to mention his generosity and good humor, he was in fact a kind of personal hero. Of course, my tired feet and crafty thumb couldn’t say enough good things about him and his vehicle. As he prepared to pull away I thanked him again—for the ride, the story, and the smoke, which, of course, I did not inhale and only accepted out of courtesy.

Sitting on the gas station curb that evening, Wolfgang Amadeus by my side, the two of us covered in Klondike Bar and the day’s fading light, I couldn’t know that years later, wandering one of our country’s premiere natural history museums, I’d come upon a hunk of feldspar the size of a stout man’s torso—a hunk of feldspar bristling with one hundred aquamarine crystals. Nor did I have any inkling that beside the phenomenal specimen a video would be playing in which a handsome, clean-cut gentleman in a purple polo shirt describes how, through hard labor and perseverance, he came to unearth a near-priceless buried treasure. I couldn’t know that I would stand there, staring, stupefied, caught by memory and the wild gaze of a snarling blue wolf.

Leath Tonino is a freelance writer. His prose and poetry appear in Orion, The Sun, Outside, New England Review, Tricycle, and Utne Reader, among others. The Animal 1,000 Miles Long, a book of his essays, will be released this coming summer.