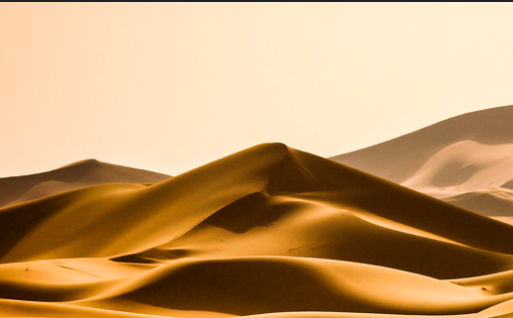 Entering the Sahara, the rock and hard-packed sand is so flat and immense you can see the Earth’s curve. It’s an optical illusion, really, the mind providing an explanation in the face of such an expanse, the way it interprets the glassy reflections in the near distance as water. On very hot days, the sun bleaches the sky and sand, whiting out all points of reference. It can be literally mind-blowing, inducing Sahara Syndrome, a temporary anxiety disorder that can push you to the fringes of insanity.

We drive across sun-charred fields of blackened boulders and millions-years-old petrified forest, into ravines and craters and down rocky slopes onto the gravelly floors of dried-out pre-historic lakebeds. Our guides are Tuaregs, semi-nomadic Muslims who know their way through this sea of sand. But when we hit soft sand, the vehicles slow down, and there’s a sense that you’re deep in it, lost in this sahara.

Certainly many who went before us were lost, victims of wrong turns, mechanical failures, mistakes and unfortunate twists of fate, dehydrated by the desiccate air and then swallowed by great dunes that can move like waves. We’re well equipped with big tanks of fuel and water, and I do not believe we’re in any danger, yet there’s something disorienting about the lack of signposts, or even roads and trees. We rely on such things to give us digestible perspectives.

Then, the first sight of dunes: soft, soaring mountains. Ergs—the geographical term for dune fields—actually cover less than twenty percent of the Sahara, so it’s exhilarating to arrive at one after hours of driving. Perhaps it’s the soft lines or textures, or the play of light, shadow and color, or the size. At the first sight of them, our escorts prostrate themselves in afternoon prayers.

We hike up the ridges and peaks of two cinnamon-colored dunes that dominate a series of tributaries pouring out of them in all directions. The pale, late afternoon sunlight beaming down on one side of every ridge separates light from darkness, and casts shadows in scooped-out hollows. The sides of the sand mountain radiate an orange glow. A light breeze sweeps granules of sand, which roll in miniature waves.

At night, I find a quiet spot alone. The stillness is other-worldly. The cold presses down like a weight. Lying on my back on the cool sand, I look up at the deep and active cosmos, a stellar chandelier with millions of flickering lights. Star showers and streaks of comet dust fleet across my field of vision. They seem almost close enough to touch; at the same time, the vast distance takes my breath away.

I am staring up at eternity. It’s both terrible and serene. What will be will be. I think of my old friend Phil; cancer, not dry air, accounted for his desiccation. At first talking was uncomfortably intimate, but finally I asked, “What’s it like?”

The morning sun puts things back in place, and I leave my thoughts of Phil as the SUV’s engine turns over and the driver, his head wrapped in a black shesh, puts a cassette in and cranks up an incongruous sound: Kenny Rogers singing “Desperado.” I shut it off; he turns it back on. Our disagreement restores the filter as we roll off toward that big bright bulb of the sun levitating just above the desert floor.

Todd Pitock is a writer in Philadelphia whose work has appeared in The Atlantic, Discover, and The New York Times, and in anthologies including Best American Nature and Science Writing and Best Travel Writing.