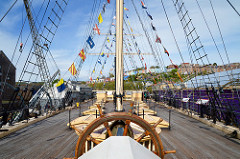 The Second Battle
March 26
The women were weirdly dressed: short, revealing, feminine dresses over naval uniform trousers. An attractive French woman was topless, her lower half crammed into a pair of tight military trousers, while some of the soldiers living it up down in the belly of the ship were wearing women’s silk negligees, once bright white but now so heavily stained with vomit, urine, and semen that they were closer to dark grey. On board the Josephine—over the many days of her voyage so far—a professional, serious, and accurate reenactment of some of Sodom and Gomorrah’s wildest days had been performed. Thus the Josephine rocked heavily on the surface of the sea, her cargo consisting of dozens of woozy French women and dozens of French soldiers who were “guarding them,” while the port of Saint Jean d’Acre blinked on the distant horizon.