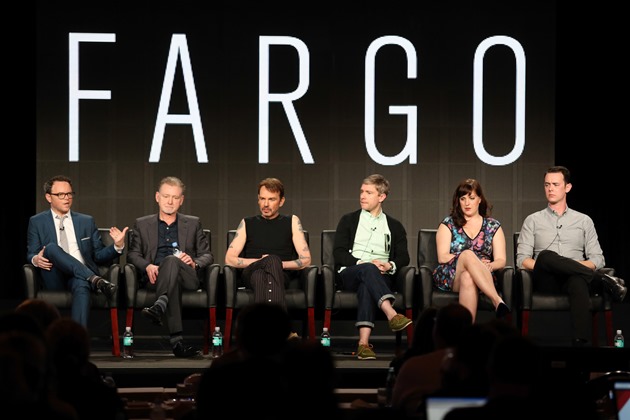 In Fargo, an unpredictable and manipulative out-of-towner named Lorne Malvo (Billy Bob Thornton) incites a string of murders in small-town Minnesota. Though thematically, tonally, and aesthetically based on the critically acclaimed 1996 Coen brothers’ film of the same name – fear not, the series preserves the film’s beloved dark humor and “you betcha”s – the Emmy-nominated FX mini-series introduces entirely new characters and plot. Many of these characters are unexpectedly layered, defying tropes of the idiot detective and the ruthless killer, while some minor characters fit comfortably in well-known molds. It is a credit to the expert writing and acting that even these characters – including Glenn Howerton’s artificially bronzed and tragically naïve personal trainer – are vibrant.

In the first episode, we meet life insurance salesman Lester Nygaard (Martin Freeman) – a doormat tread on by everyone, especially his wife. A chance encounter with his high school bully, Sam Hess (Kevin O’Grady), sends Lester to the hospital with a broken nose. There, he meets Malvo, a hitman with a severe haircut and black eyes, who chides Lester for quietly enduring emasculation and offers to kill Hess. Lester doesn’t say yes to the offer but doesn’t say no either, and the two part ways. Malvo stabs Hess at a strip club that evening. A few days later, a newly confident Lester strikes his wife dead with a hammer when she criticizes him. In a state of panic, Lester calls Malvo to help him deal with the body. First to arrive at Lester’s door, however, is Chief Vern Thurman (Shawn Doyle), there to question Lester about the Hess murder. When Malvo appears, he kills the chief with a shotgun. To avoid suspicion, Lester runs headfirst into a wall to knock himself out as if he too were a victim of whomever committed the other two murders.

Throughout the series, Lester must shed layers of scruples in order to evade capture and preserve his new alpha male persona. This transformation, guided by Malvo’s powerful influence, is the series’ thematic backbone, spawning ethical questions that haunt characters and viewers alike. From the beginning, Lester’s crimes are suspected by the pensive Deputy Molly Solverson (Allison Tolman), and she butts heads against the newly appointed chief. Luckily for Molly, she has Duluth Deputy Gus Grimly (Colin Hanks) on her side – eventually romantically, as well as in the line of duty. Thrown into the mix are the surly, bearded Mr. Numbers (Adam Goldberg) and the hulking, deaf Mr. Wrench (Russell Harvard), who have been hired by Minnesota’s Fargo-based organized crime organization – referred to as “Fargo” – to identify and kill the murderer of Sam Hess. This makes for a complicated game of cat-and-mouse where everyone takes turns as predator and prey.

The show is notable for its skilled acting, striking cinematography, and sharp dialogue that amuse and unsettle viewers. Fargo isn’t perfect – there’s an entire subplot that disappears without resolution or explanation – but the show is confident in a way that lends it a cinematic quality. Even though writer and creator Noah Hawley has described Fargo as a ten-hour movie, there are still ten distinct episodes – each named after a riddle or paradox – which allows for ten beginnings and ten endings. Knowing that our memories give preferential treatment to endings – whether it’s the last thing you read before bed or the final moment of an important relationship – the creators of Fargo have imbued the final scene of each episode with vivid thematic commentary on who comes out on top when some humans behave like beasts.

The last scene of the first episode – “The Crocodile’s Dilemma,” in which Malvo brings corruption to Bemidji – is of Molly and her father Lou, a former policeman, as they prepare to go ice fishing. Lou asks Molly to work as a hostess at his diner, since “people in this world are less inclined to shoot a hostess than, say, an officer of the law.” He’s not surprised, though, when Molly concedes that hers is a risky profession but she’s going to continue on with it anyway. The pair exchange “I love you”s, and Molly walks away, back to work. This scene is a warm blanket that comforts the viewer after an otherwise chilling first episode, providing hope that goodness will be restored and establishing Molly as true north on Fargo’s moral compass.

However, the next two endings, the final scenes of “The Rooster Prince” and “A Muddy Road,” provide no such comfort. Episode 2 ends with Mr. Numbers and Mr. Wrench dragging an innocent man across a frozen lake and lowering him head-first through a hole in the ice. While they ignore the man’s protests, the following lines from Eden Ahbez’s “Full Moon” are spoken in the background:

The scene is at once playful and eerie, presenting an auditory representation of utopia simultaneously with visuals representing extraordinary brutality.

The ending of Episode 3 showcases one Malvo’s techniques for destroying his hits. A sweating, pill-crunching supermarket magnate named Stavros (Oliver Platt) steps into a shower, over which scene, Malvo narrates the story of Moses, starting with his rescue from the Nile. When he reads the part where Moses kills an Egyptian man for brutalizing a fellow Jew, blood gushes out of the showerhead onto a horrified Stavros. Then, Malvo appears onscreen, smirking as he walks away from Stavros’s house and pulls a blanket over jugs of pigs’ blood in the trunk of his car. Clearly, Malvo is not a cookie-cutter bounty hunter – he enjoys subjecting his victims to theatric emotional manipulation.

After these endings, the viewer understands the extent to which darkness has infiltrated the world of Fargo and is alarmed by its atrocities. With these elements in place, Episodes 4–10 center on whether Lester will be punished for his actions, by Fargo, the police, or Malvo.

The final scenes of Episodes 4 and 5 emphasize Lester’s trouble. “Eating the Blame” ends with a simple moment of tragic comedy. In his desperation to escape Mr. Numbers and Mr. Wrench, Lester has punched a cop and sits in a holding cell. He is then joined by his pursuers, who tower over him and smile. In the next episode, Lester is hospitalized for a pernicious infection from the shotgun pellet lodged in his hand when Malvo shot the police chief in Lester’s living room. The episode ends as Molly opens the door to his hospital room and glares at Lester’s body, curled up in the fetal position and feigning sleep. This scene depicts two types of hunters, set apart by what motivates them. The predator, Lester, is driven by self-preservation, but the evolved hunter, Molly, is driven by empathy – she’s consumed by the need to right the wrong of her beloved mentor’s murder. Perhaps, according to this scene, the evolved hunter’s motivation gives her a strategic advantage and Lester will finally get his comeuppance.

However, Lester goes on the offensive in the next episode, “Buridan’s Ass,” and plants evidence implicating his brother Chaz (Joshua Close) in the murders of Lester’s wife and the Chief. The ending of this and the next episode (“Who Shaves the Barber?”) depict Lester’s and Molly’s reactions to the success of Lester’s plan – delight and panic, respectively. Here, crime is not met with justice, and these endings are the lowest point of the series’ moral crisis.

In the middle of Episode 8, “The Heap,” Fargo flashes forward a year. Lester is married to the beautiful, adoring Linda (Susan Park), owns Nygaard insurance, and accepts a Salesman-of-the-Year award with marked swagger. But will Lester really get away with it? In the episode’s closing scene, Lester’s security unravels when he spots a lighter-haired but unmistakable Lorne Malvo laughing at a hotel bar in Kansas City.

In the penultimate episode, “A Fox, a Rabbit and a Cabbage,” we find out that Malvo has been posing as a dentist for his next bounty. When Lester insists he knows Malvo, threatening to blow his cover, Lester opens the door for violence to reenter his life. He crosses his former mentor and sacrifices his new wife’s life to escape Malvo’s retribution, and it’s left to Fargo’s final episode, “Morton’s Fork,” to settle who comes out on top. Malvo and Lester die like animals – Malvo at the hand of policeman Gus Grimly, and Lester by falling through thin ice in a desperate escape from the authorities. The show ends with Gus, his daughter Greta (Joey King), and a pregnant Molly cozying up on a couch and watching TV. The timid Gus, now a mailman, has earned a citation for bravery, and Molly gets to be the chief of police.

The endings of each Fargo episode are skillful boiling points: they reach a level of dramatic intensity powerful enough to make a thematic statement, but stylistically quiet enough to avoid being gratuitous. Like that of the first episode, the ending of the finale is a warm, reassuring blanket. Though some might complain that letting the good guys triumph so wholly is a sentimental cop-out, in fact this resolution manages to be both satisfying and unconventional. The threat of Malvo – and his disciple, Lester – are defended by a nervous mailman and his pregnant, milkshake-loving wife. These two, apparently meek but surprisingly strong, are the ultimate top dogs. Their self-sacrifice, empathy, bravery, and neighborliness are realistically and entertainingly under siege in the series’ ten episodes – sometimes finishing with humor, sometimes with horror, but always distinctively Fargo.