Alla and I were introduced through a project that paired poets and painters affiliated with Boston University. Walking into her studio was like seeing all the things I wish my poems could do in language. We selected my five-poem series, “The Book of Ikons,” to work on together. This series (which also includes poems about Osip Mandelstam and Angelika Balabanoff, both Russian, like Alla), posits as worthy of iconography five historical figures, all of whose relationship with socialism was complicated by Soviet Communism, violence, or anti-semitism (three subjects also important to us). We wanted to explore the faith, hope, disappointment, transcendence and danger inherent in these ideals.

Alla created large-format monoprints, which became the digital images presented here, to be paired with the poems like facing panels in an icon screen. Rather than just creating illustrations, her images interact with and embody the poems. Like iconic images, these figures are idiosyncratic and not wholly accurate (for example, the little story about Kautsky is actually a conflation of several historical incidents). They capture what these figures mean to us, even if they are rooted in a reality that is at least partially imaginary.

Poems by BRUCE BOND and Paintings by ARON WIESENFELD 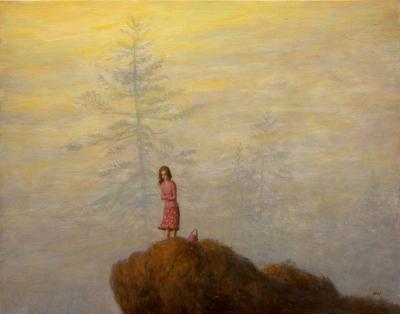 The woman alone atop the precipice,

what does she fear more, falling or jumping,

Poems by Bruce Bond and Paintings by Aron Wiesenfeld10.26.2012
Read more...
Get Our Newsletter