Alla and I were introduced through a project that paired poets and painters affiliated with Boston University. Walking into her studio was like seeing all the things I wish my poems could do in language. We selected my five-poem series, “The Book of Ikons,” to work on together. This series (which also includes poems about Osip Mandelstam and Angelika Balabanoff, both Russian, like Alla), posits as worthy of iconography five historical figures, all of whose relationship with socialism was complicated by Soviet Communism, violence, or anti-semitism (three subjects also important to us). We wanted to explore the faith, hope, disappointment, transcendence and danger inherent in these ideals.

Alla created large-format monoprints, which became the digital images presented here, to be paired with the poems like facing panels in an icon screen. Rather than just creating illustrations, her images interact with and embody the poems. Like iconic images, these figures are idiosyncratic and not wholly accurate (for example, the little story about Kautsky is actually a conflation of several historical incidents). They capture what these figures mean to us, even if they are rooted in a reality that is at least partially imaginary. 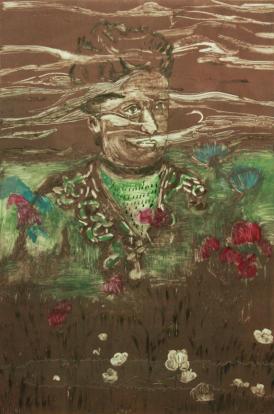 When you first crossed the border to Germany

you came covered up, hidden in a wagon like a tumbrel.

That sour little country, still the hope of your Europe,

where you made an uneasy home, a mouse

in a knife drawer. Sturdy engine, you, squat and self-

sufficient economy, in your good boots with your limp,

the frilled lip of your oyster-shaped hat, your murderous red language:

they killed you in the Eden Hotel and put you

in a river. I want to believe the last words you said

you said in German. I want to have faith you said

Don’t Shoot. But hush now—here you are—

not in prison, weeping over a beaten ox,

not beside yourself in August ’fourteen,

but in the meadow you loved so much,

up to your waist in the deep grass

and wild flowers, your eyes covered

with a bright visor of light.

I can feel your crosshatchings on my body: little

wounds. Ink or charcoal, your black is the black

of the childhood room before sleep. Your whole

world divides into light and shadow, even

your skipping, syncopated name: a child

tripping up the museum steps and then the slow

ponderous gait of the mother behind it.

The hands you render broad as oar blades,

You said “Seed Corn Must Not Be Ground!”

And you showed the faces of the mourners

before the body of Leibknecht. Your son

died in a trench, wretched. In your self portrait

you regard yourself curiously, but without any pity,

cheek in palm. Yet when I look again you have altered,

you have put your face behind your hand, 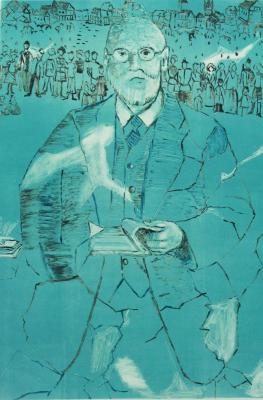 The sky itself is robin’s egg green and fretted

with cracks. And here you sit in your dark suit

but you knew when the truth had to be faced.

Your eyes are formal and sad. One of them

You know you see neither in Russia.

You know that whatever it is you want

for the people, violence unfits them for it.

Your third eye, which no one can see, looks out anxiously

from their walk. You are right to be worried.

They are picking off your friends one

by one. A whole constellation of stars put out,

fondest uncle—singly at first, and then all at once.

Katherine Hollander is a poet and doctoral candidate in modern European history at Boston University.

Alla Lazebnik is a figurative painter and printmaker.